Please ensure Javascript is enabled for purposes of website accessibility
Log In Help Join The Motley Fool
Free Article Join Over 1 Million Premium Members And Get More In-Depth Stock Guidance and Research
By Scott Levine - Dec 28, 2019 at 11:20AM

This gold miner's stock is down more than 2% in 2019. Does that mean now's an opportune time to pick up shares?

Rebounding from a 1% decline in 2018, the price of gold skyrocketed in 2019 and is poised to end the year up 16% higher than where it began. Is this rise a reason to believe all gold mining stocks should be forsaken? Of course not. The looming specter of Donald Trump's impeachment, geopolitical uncertainty, and the fear of a market correction are only a few of the things that may motivate investors to move toward that "safe-haven" investment, gold, driving the price higher in the coming year.

While there are a variety of ways in which investors can gain exposure to the yellow stuff, investments in gold-mining companies are one of the most common. So, let's take a closer look at IAMGOLD (IAG -1.74%), a mid-tier mining company, to see if now's a good time for investors to pick up shares and add some luster to their portfolios. 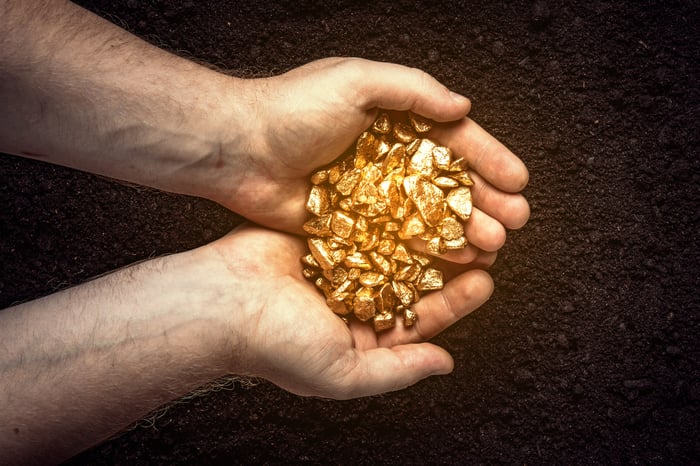 Food for the bulls

It's not uncommon for claims of corporate malfeasance to circle around mining companies -- an issue of particular interest for those focused on environmental, social, and governance (ESG) investing. But in the case of IAMGOLD, investors can apparently feel confident that the company's management is operating in a trustworthy manner. In the company's Q3 2019 earnings report, IAMGOLD noted that it received the highest rating, GA-1, from Moody's Investor Services in the rating agency's first assessment of Corporate Governance for the Metals and Mining sector. For those determined not to lose sleep wondering if their investments are linked to ethically questionable businesses, therefore, IAMGOLD (in Moody's eyes at least) appears to have proven its ESG mettle in the mining of precious metals.

Turning to the company's financials, investors will find that one of the more alluring aspects of IAMGOLD is its strong balance sheet. The development or sustainment of established mining operations is capital-intensive business, and mining companies, oftentimes, will take on considerable levels of debt to keep their drills digging. In the case of IAMGOLD, though, the balance sheet -- which features a net cash position of $229 million as of the end of Q3 -- is less of a source of concern. 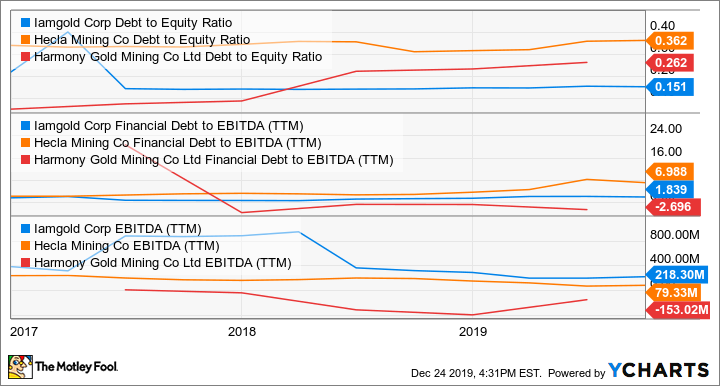 It's not only the fact that IAMGOLD's debt-to-equity ratio of 0.15 won't raise a red flag (Hecla Mining and Harmony Gold have ratios of 0.36 and 0.26, respectively) that casts the company in a golden light. Management's conservative approach to leverage, as evidenced by its debt-to-EBITDA ratio of 1.8 should allay investors' concerns of the company jeopardizing its financial health to pursue growth -- something even more noticeable considering Harmony Gold has struggled to generate positive EBITDA over the past year.

Fodder for the bears

IAMGOLD may earn high marks for its corporate governance, but skeptics will point to the company's inability to generate a strong gold margin as a major factor in the company's inability to earn straight As on its report card. Despite the increase in the price of gold over the past year, IAMGOLD's consistently high all-in sustaining costs (AISC) have hindered its ability to add much luster to its income and cash flow statements. 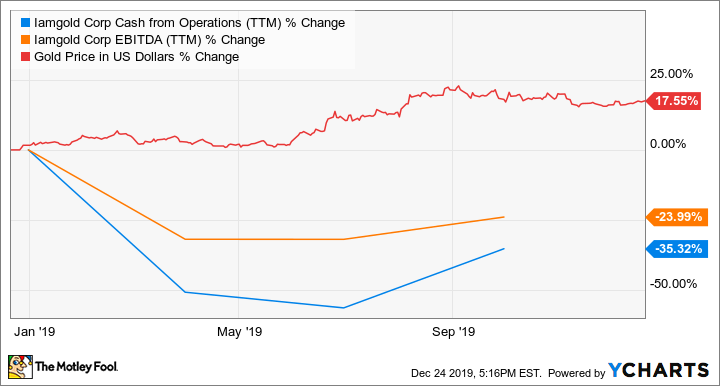 In fact, 2019 is shaping up to be even more challenging than the company had previously imagined. In the beginning of the year, management had forecast 2019 AISC per gold ounce of $1,030 to $1,080. During its Q3 earnings presentation, though, management guided for 2019 AISC per gold ounce of $1,090 to $1,130. While the price of gold per ounce is currently about $1,500, the company isn't in tremendous peril. Still, should it encounter a precipitous drop in the price of the yellow stuff, IAMGOLD may find itself turning to the debt market to help it finance the development of its Saramacca mine in addition to the other projects in its pipeline.

Pessimists will also point to the fact that IAMGOLD's price tag isn't too appealing at its current valuation. Whereas IAMGOLD's stock has a five-year average price-to-operating cash flow multiple of 11.1, it's currently exchanging hands at a ratio of 13 according to Morningstar.

Can investors strike gold with IAMGOLD?

Among the numerous ways in which investors can gain exposure to gold, investing in a mining company is one of the most common considerations. With strong corporate governance and attention to its financial well being, IAMGOLD certainly warrants consideration, but the company's inability to generate a strong gold margin and the stock's high valuation suggest that now's not the best time to pick up shares but rather watch it from the sidelines. Investors may be better-served by considering a dividend-paying mining company (of which IAMGOLD is not) or another gold-affiliated option.