As we prepare to turn the page on the year that was 2019, it's time to review your investments. Doing this every few weeks is a terrible idea -- akin to sitting around waiting for a plant to grow. But once a year is perfectly healthy; the New Year is as good a time as any.

Below, I'll highlight three large-cap ($20 billion to $500 billion) top stocks to buy heading into the year. All three possess the qualities I look for in a company: founder-led, healthy balance sheets, wide moats, and missions that can be fulfilled in infinite ways. 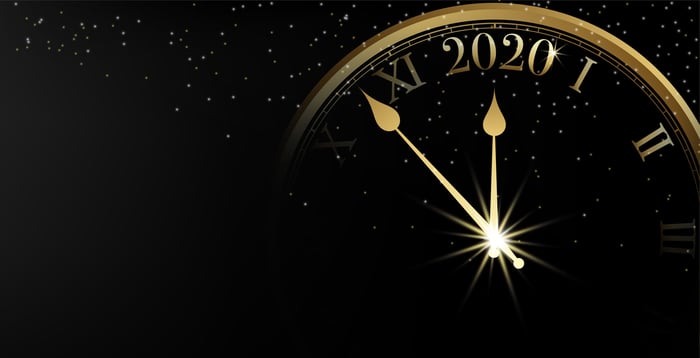 An e-commerce platform made from necessity

When Tobi Lutke was a budding entrepreneur in snowboards, he couldn't find a single platform to help him establish an e-commerce presence. So he built his own. It turns out that platform was in high demand. Lutke shelved the snowboards in favor of building a company -- Shopify (NYSE:SHOP) -- "to make commerce better for everyone."

Such an all-encompassing and inspiring mission has led to two main revenue streams:

As you can see, both of these revenue streams have experienced significant growth. 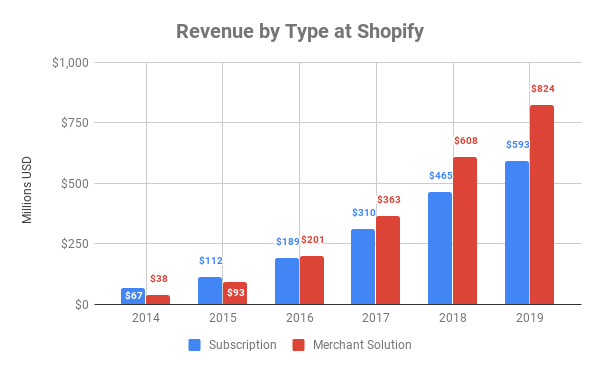 Crucially, the company's mission means that there are several more ways to "improve commerce for everyone" still to explore. One of those was the announcement this summer that Shopify would be allowing merchants to access a vast fulfillment network that offers a viable alternative to Amazon.

Though the company isn't even free cash flow positive right now, I'm not worried. Once merchants are in the ecosystem, they're largely there to stay -- the switching costs are very high. Additionally, Shopify has a massive ecosystem of third-party app developers. Those developers flock to the site because of Shopify's 820,000+ merchants -- creating a powerful network effect.

With Shopify's roughly $2.7 billion of cash on hand and no long-term debt, I think spending money to capture market share makes all the sense in the world right now.

Developing tools in-house -- and then offering them to others

MercadoLibre (NASDAQ:MELI) is Latin America's leading e-commerce site. The company is part eBay (third-party merchants list their wares) and part Amazon (it is developing a large fulfillment and shipping network).

But one of the biggest problems MercadoLibre experienced in its early days was finding a way for its customers to pay for stuff online. Latin Americans are vastly under-banked compared to North America. So it developed its own payment tool: Mercado Pago.

The results have been far beyond anyone's wildest dreams. In fact, Mercado Pago started out as a way to pay for stuff on MercadoLibre. But with the introduction of mobile point-of-sale (mPOS) machines, businesses that have nothing to do with MercadoLibre (think: grocery stores and gas stations) are accepting payment via Mercado Pago.

Technically, this is referred to as "off-platform" spending, and it is growing at a break-neck pace. 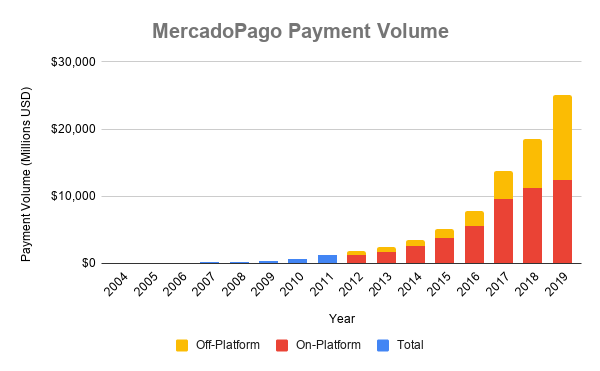 Chart by author. Data source: SEC filings. On and off-platform payments only delineated starting in 2012.

Still run by founder Marcos Galperin, MercadoLibre has enormous potential to fulfill its mission of "democratizing commerce and financial access." The company is spending aggressively to build out its shipping network, but has still generated $278 million  in free cash flow and has a net cash (cash and investments minus long-term debt) position of $2.5 billion -- making it a strong buy in my book.

Finally, we have Veeva Systems (NYSE:VEEV). Just after the turn of the millennium, Peter Gassner was an executive at Salesforce.com. He realized that because drug companies had such specific regulatory requirements, there were no cloud providers who could serve them. So he decided to start Veeva for that very purpose.

The company started out as a simple customer relationship management, or CRM, tool -- which is now referred to as "The Commercial Cloud." But the company has evolved.

Veeva's key product is now Veeva Vault. The easiest way to think about it is as a place on the cloud where a drug company can store every single piece of information it needs to bring a drug from the idea stage, through clinical trials, to the market. There's an ever-growing list of solutions to do this, all available on a subscription basis. 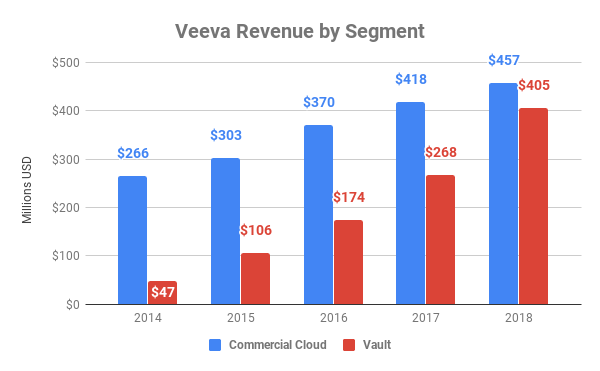 We won't have specific 2019 numbers until the company issues its annual report early next year. But we already know that Vault has eclipsed the Commercial Cloud. That's a big deal, because Vault is very sticky. Once all of that mission-critical data is stored on a platform, and a company's employees become familiar with it, they are loath to switch. That's why the company's subscription retention rate is above 120% -- meaning customers not only stay on, they use more tools and pay more money over time.

Vault has been so popular that companies outside of pharmaceuticals have been clamoring for tools of their own. Heavily regulated industries like chemicals, consumer packaged goods, and cosmetics are also adopting Veeva tools -- making it easy to see that Veeva has multiple potential futures for the five years ahead.

With its solid financial footing (net cash position of $1 billion) and with strong free cash flows ($423 million over the past year),  Veeva has more than enough to fund these potential market expansions.

By no means am I saying you should go out and put all of your money into these three stocks. There are as many different investment styles as there are investors. Personally, these three make up over 25% of my family's real-life holdings. These aren't empty words.

I think all three deserve your consideration. If you like what you see, buy a little and add to the position over time.