Forever is a long holding period, but it's often the best one for investors. Planning to hold a stock forever allows us to overlook the natural day-to-day or quarter-to-quarter volatility of a stock. It also ensures we don't miss the difficult-to-time pops stocks often have.

As I looked at my portfolio for stocks I couldn't imagine selling, four stocks popped out of the list. Apple (NASDAQ:AAPL), Disney (NYSE:DIS), Verizon (NYSE:VZ), and Visa (NYSE:V) are the stocks I don't plan to ever sell. 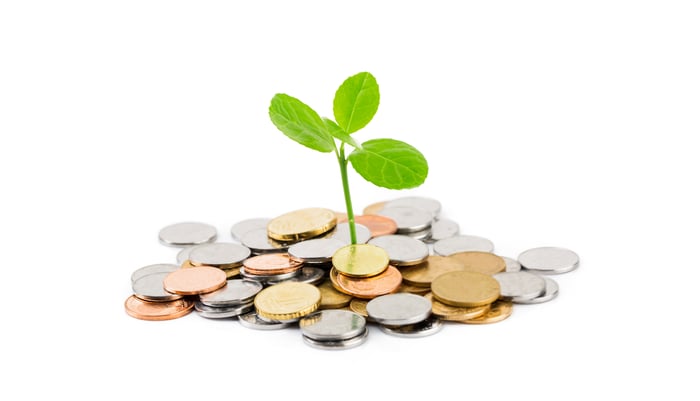 There are few technology companies with the scale of Apple, and that alone makes it a stock I want to hold long-term. But what I really think Apple has going for it is an amazing ecosystem of products that works seamlessly together and seems to be able to grow year after year.

iPhone is definitely the center of the Apple ecosystem, and it drives iPad, Mac, Apple Watch, and even new Apple Card sales. On top of that, services like the App Store, iCloud, and Apple TV+ fit with these products and create a seamless experience.

The way that Apple has built the ecosystem allows it to charge a premium for products versus competitors. iPhones, watches, and even TV boxes are more expensive than those offered by competitors because they'll work with a consumers' other devices and won't become bricks because they stop being supported (see Android devices).

Apple is also incredibly strong from a balance sheet perspective. It has $206 billion of cash and securities on the balance sheet and is generating about $60 billion per year in free cash flow, making it arguably one of the better value stocks on the market. That's a great combination, and I see no end to the company's tech dominance right now.

Content is the name of the game in the media business, and no company has better content than Disney. After acquiring Pixar, Marvel, Lucasfilm, and Fox assets, it was able to launch Disney+ and have arguably the best library in streaming from Day 1.

But the reason to own Disney stock long-term is its superior cash flow model. Disney doesn't just make money from movies, TV networks, streaming, or theme parks -- it has all of the above. In fiscal 2019, Disney generated 36% of revenue from media networks, 38% from parks, 16% from studios, and the rest from other sources. If you look at a competitor like Netflix, it has just one revenue stream, and it would take decades to build out a physical park infrastructure to match Disney's.

I think Disney's content and its multiple ways to reach and generate revenue from customers will be valuable for decades to come. And now with one of the best streaming apps and tens of millions of subscribers, it's even disrupting its traditional business and entering a new growth market. Innovation never stops at the House of Mouse.

You may notice a theme here -- I'm picking companies where scale is a big differentiator. And nowhere is scale a bigger differentiator than in wireless telecommunications. Verizon has built arguably the best wireless network in the U.S. and is so far ahead of Sprint and T-Mobile that they're trying to merge to create an industry with 3 competitors, along with AT&T. Whether Sprint and T-Mobile merge or are left with inferior networks on their own, Verizon is in a great position to exploit its size and pricing power in the market.

Two things I like about Verizon right now are the growth potential of 5G and the idea of creating a next-generation bundle for consumers. 5G will not only bring faster speeds to smartphones, but it will also allow Verizon to reach millions of customers with home internet service wirelessly. No longer will cables or wires need to be run to every house -- a cellular tower is close enough for service.

5G Home also allows for new bundle options, and that's where Verizon's new partnerships come into play. The company is now offering Disney+ and Apple Music free to its subscribers in the hopes of being the sales hub for these services long-term. Think about bundles with smartphone access, 5G home, and streaming apps all in one bill. I think that's in Verizon's future, and it's why I think the future is bright.

Scale also plays a big role in Visa's dominance in credit card transactions. The company sits between buyers and sellers with the biggest network on both sides, providing a transaction platform people are willing to pay for.

As more transactions become digital, the services of an intermediary like Visa becomes even more important. The company provides a level of trust in a transaction, and merchants' willingness to pay for that drives the high-margin business. 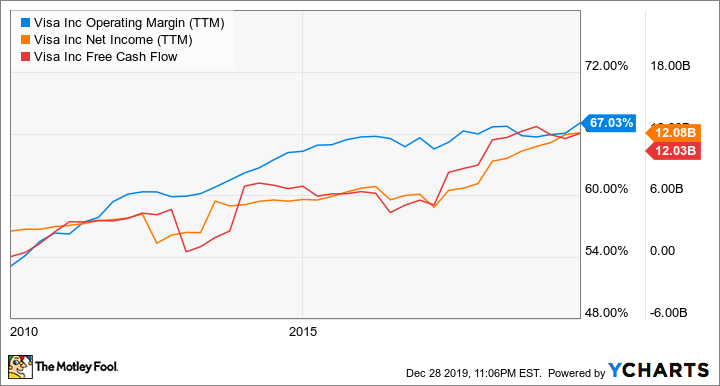 Unless we stop using digital transactions, Visa is going to play a big role in the future, and that's why it's sticking in my portfolio.

Scale and financial stability are the themes in the stocks you see above. I don't see anyone breaking through these companies' competitive moats anytime soon, and a decade or two from now I expect them to be winners in my portfolio.