AT&T (NYSE:T) has paid shareholders a dividend since 1984. The amount of that payout has varied greatly, but the company has not skipped a quarter in the entire history of its dividend program.

While the road has been a bit rocky, AT&T has been steadfast in handing money over to its shareholders. And in recent years, the numbers have settled down a bit, with the company slowly raising its dividend from $0.31 per share per quarter in 2004 to $0.52 for its next quarter, in 2020.

History shows that AT&T has been a safe bet for dividend investors and people building out a retirement portfolio. However, the market for some of the company's core products is changing, and that could put the dividend at risk. 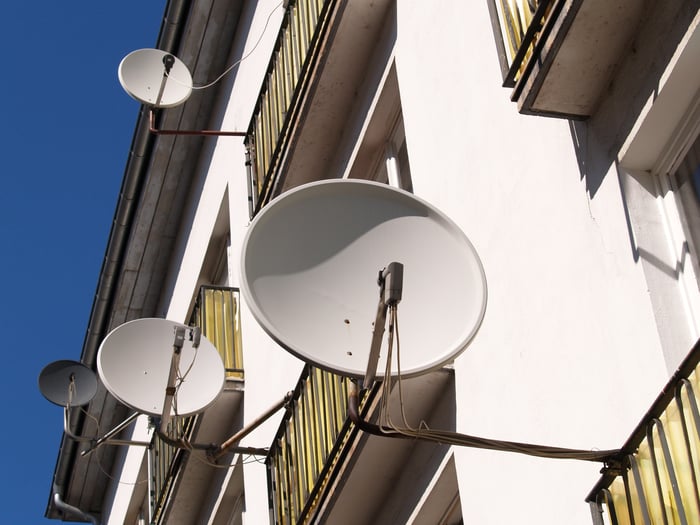 DIRECTV has been losing customers at an alarming rate. Image source: Getty Images.

AT&T made a $67 billion bet on the future of cable television when it bought DIRECTV in 2014. At the time, the deal seemed like a smart one. The company, which was focusing on selling subscriptions to its wireless phone service, could bundle that service with a television package and sell it nationally.

That made some sense, but there were a couple of faults in the logic. The first is that in an age where consumers want both a pay-TV and an internet subscription, consumers may not want to have to deal with two different companies to get those services. Satellite TV providers didn't offer bundled internet, and in the digital age, that made their product less attractive.

The second issue AT&T overlooked -- and this may be the bigger problem -- is that the company bought DIRECTV right before the traditional cable subscription model began to fall apart. That said, when the deal was made, there were signs that cord-cutting could become an issue, and the industry did lose subscribers in 2014.

Those losses have grown steadily each year, and they've hit satellite providers even harder than the rest of the industry, though that trend was slow to emerge. DIRECTV actually gained 1.2 million paying customers in 2016 (while its satellite rival DISH Network lost just over 1 million).

But that was the last year that AT&T's satellite company would post a gain in subscribers. It's since lost 554,000 in 2017, 1.23 million in 2018, and roughly 2.4 million satellite customers in the first three quarters of 2019, according to data compiled by Leichtman Research Group. That's a disturbing trend, as losses have accelerated greatly and are unlikely to turn around.

How important is AT&T's cable business?

The upside that should reassure shareholders is that AT&T expects to be able to continue to grow its revenue while absorbing the accelerating loss of DIRECTV customers. It has forecast revenue growth in 2020 of 1% to 2%, and it expects its earnings to come in at $3.60 to $3.70 per share.

In the third-quarter earnings release, CEO Randall Stephenson promised: "Our 3-year plan delivers both substantial and consistent financial improvements over the next 3 years. We grow revenues, EBITDA, and EPS every single year, and free cash flow is stable next year, but then grows in both of the next two years, as well."

In the release the company also specifically mentioned its dividend, saying it expects "continued modest annual dividend growth" with "dividends as [a] percent of free cash flow of less than 50% in 2022."

Essentially, AT&T is telling shareholders that it knows DIRECTV has problems, but that the company can handle the subscriber loss by making more money in other areas. It seems to have a solid plan to do that, but it remains at least a little vulnerable if something else in its portfolio falters.

That could happen, but doesn't seem all that likely. AT&T has a problem with its satellite TV business, but it's managing the declines and the issues should not threaten its dividend. This isn't a completely safe dividend -- the company does have some challenges to navigate -- but it's a very strong bet. And management appears to have a very reasonable plan for growth.