In July 1996, a French satellite was damaged when struck by a jettisoned Ariane third stage rocket -- the first confirmed case of a piece of "orbital debris" damaging an artificial satellite in orbit. Since then, the situation in orbit has only gotten worse.

From 2009 to 2019, at least half a dozen collisions of active satellites with inactive space debris were recorded. In 2019 alone, a defunct Russian satellite narrowly missed colliding with Bigelow Aerospace's Genesis II experimental habitat, and in a second incident, a European Space Agency Aeolus satellite had to fire its thruster to avoid colliding with SpaceX's Starlink 44 communications satellite.

As more and more satellites are put in orbit over time -- joining the 5,000 satellites up there already -- the chances increase that one of the nearly 130 million items of space debris up there will collide with a working satellite or rocket, potentially setting up a Kessler Effect phenomenon of orbital debris striking satellites, which break into more orbital debris that collides with more satellites, until all of Earth orbit becomes so filled with debris that the region becomes impassable.

So what is to be done? 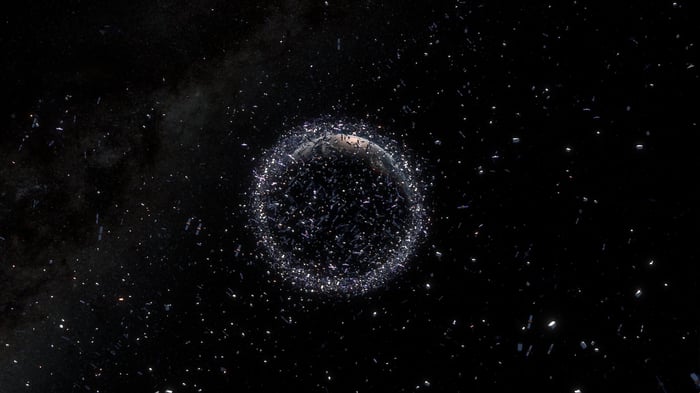 American space giant Lockheed Martin (NYSE:LMT) thinks it has part of the solution. About half a decade ago, the U.S. Air Force awarded Lockheed a $914 million contract to build a "Space Fence" -- a ground-based radar system charged with identifying and tracking the 200,000 biggest pieces of space junk currently in orbit.

Granted, "200,000" is just a small fraction of the junk that's up there. According to the European Space Agency, there are about 34,000 objects larger than 10 cm diameter in orbit today, but about 900,000 more ranging in sizes from 1 to 10 cm -- and 128 million of sizes down to 1 mm. Still, "200,000" is four times more objects than the Air Force was previously capable of tracking. Knowing where all this junk is in orbit, it is hoped, will permit rocket companies to plan trajectories that won't intersect the debris, and help satellite operators to maneuver around it, preventing future collisions.

Five years after the contract was awarded, the U.S. Air Force Space and Missile Systems Center confirmed last month that Lockheed's Space Fence has begun a "trial period." Assuming the results of these trials are positive, the Space Fence could soon be declared operational.

At that point, the question will shift from "What's up there and where is it?" to "What do we do about it?"

What do we do about it?

We've already seen a company propose a partial solution to the problem. In October, American aerospace giant Northrop Grumman launched its first Mission Extension Vehicle spacecraft, "MEV-1," on a mission to prove that it can intercept failing satellites, remove them from traffic, repair them, and place them back in orbit. Each satellite MEV-1 succeeds in reviving will be one less piece of uncontrollable space junk cluttering up the heavens.

A second approach to the problem hails from Europe, where Swiss start-up ClearSpace has announced it will begin preparing this year to launch a mission in 2025. Its goal: to remove a single piece of space debris, specifically, a 100 kg jettisoned "Vespa" upper stage rocket orbiting roughly 400 miles above Earth.

Working on a $130 million contract for ESA, ClearSpace will send up a space "tow truck" robot to grapple the Vespa -- then move to deorbit, so that both it and its prize burn up in the atmosphere. If this demonstration project is successful, it will be the first time ever that a satellite has been used to "sweep" a bit of space junk out of orbit.

Assuming ClearSpace is successful, will its idea catch on as a practical means of cleaning up low earth orbit? Maybe -- if the price is right.

In a recent conversation covered by SpaceNews.com, Iridium CEO Matt Desch floated the idea of developing a market for removing space debris from orbit. Noting that Iridium currently has nearly 30 inoperable satellites in orbits that won't naturally decay for 100 years or more, Desch mused that if someone could come up with a way to deorbit old satellites for a price of $10,000, it would be a "no- brainer" to hire that company to clean up Iridium's waste.

Of course, the actual cost of launching one satellite to deorbit another is much higher than that ($129 million in ClearSpace's case). Desch says "it doesn't make sense" for Iridium to pay that price, given there's no penalty involved in simply allowing the satellites to remain where they are, nor any ongoing operational cost to Iridium. In Desch's view, the only real benefit Iridium would reap from removing a defunct satellite from orbit would be in the action's "PR value."

Of course, that value isn't zero -- and the PR value of being seen as a responsible actor in space will rise as more and more accidents happen over time. That could spark a clamor down here on Earth for companies to start cleaning up their act in space. And once ClearSpace has proven such cleanups are possible, it's logical to assume other companies will emerge to begin pushing the cost of deorbit down.