Please ensure Javascript is enabled for purposes of website accessibility
Log In Help Join The Motley Fool
Free Article Join Over 1 Million Premium Members And Get More In-Depth Stock Guidance and Research
By Jon Quast - Jan 4, 2020 at 9:43AM

Five Below, Floor & Decor, and Duluth Holdings are valiantly defying the trend, but each faces a challenge while aggressively opening new locations this year.

My hometown is still haunted by the ghost of Kmart past. The big empty building with its plywood-covered doors is an ongoing testament to how Amazon.com and the rise of e-commerce changed retail forever.

The shift happened long ago, but the shakeout continues as consumer discretionary stocks like Dillard's and Macy's struggle with their bloated store count while sales decline. Conventional wisdom says a large brick-and-mortar footprint is a liability.

But there are still companies defiantly opening up physical locations in the age of e-commerce. Indeed, Five Below (FIVE 0.62%), Floor & Decor (FND 3.29%), and Duluth Holdings (DLTH 4.58%) each currently have double-digit unit growth, with significant long-term goals in place.

Increased store count can be an effective way for a company to grow, but it's not without challenges. In fact, each company must overcome a challenge related to unit growth if it's going to be a worthwhile investment. 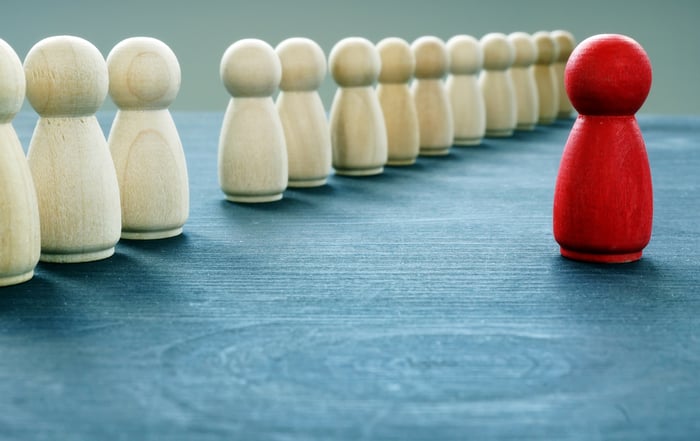 Five Below is a discount retailer targeting teens, pre-teens, and their parents. In its investor presentation, management provides a remarkable statistic. New stores cost around $300,000 to open --  that includes expenses like labor, inventory, and marketing. But in a store's first year, it generates $450,000 in EBITDA, meaning that it pays for itself in under one year. With those kind of unit economics, it's no wonder the company is aggressively pursuing 2,500 locations -- almost triple today's store count.

The stock sold off around 30% in mid-2019 over concerns about comparable-store sales (a measure of sales at locations open for at least one year). In the first quarter of fiscal 2019, comps grew 3.1% year over year, but by the next report, that figure dipped to just 1.4%, sparking concerns that the brand was falling out of favor.

In the second-quarter earnings call, management said those worries were overblown and indicated that sales would pick back up in the third quarter. It then backed that guidance up by delivering third-quarter comps growth of 2.9%.

Comps are worth watching for any retailer or restaurant, but don't get distracted from other important things in Five Below's story. One specific point of interest: its brand-new distribution centers. Currently, the company has three such centers, all on the East Coast. But it's planning three new ones on the West Coast, in Texas, and in the Midwest to support future growth. While no specific margin guidance has been given regarding these planned distribution centers, they will drag on margins in the near term. But long term, they should provide increased profitability as the company marches toward 2,500 locations.

Floor & Decor: watch out for cannibalization

Often when opening new locations, companies opt to "backfill" existing markets rather than plow into new territory. If the market can support multiple locations, there's no problem. But when existing stores lose sales to newly-opened stores, that's called cannibalization. And it's something that Floor & Decor has experienced while growing its number of stores over 20% annually.

While investors should watch 2020 in hopes that this issue is mitigated, it's worth noting that Floor & Decor can afford a little cannibalization and still have a successful business. 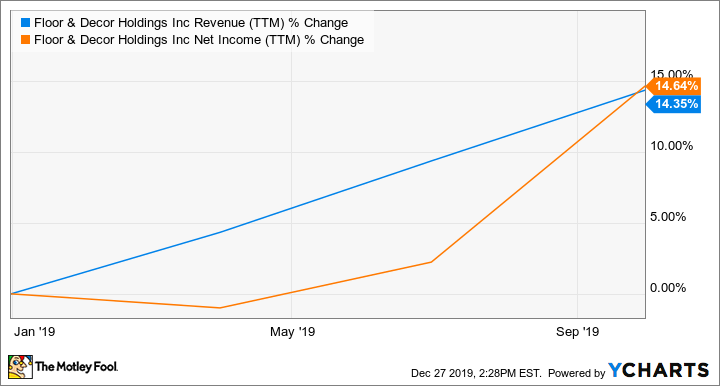 As the chart shows, net income growth has outpaced revenue growth year to date. If you zoom out further, the picture is even better, but focusing on 2019 results in isolation puts the 2019 cannibalization in perspective. With the bottom line growing faster than the top line, it makes perfect sense for Floor & Decor to continue expanding in 2020 and beyond.

Duluth management talks a lot about omnichannel retailing: the integration of e-commerce and traditional retail into one seamless consumer experience. But just a couple of years ago, this was a problem for Duluth.

Many retailers fail at omnichannel selling for lack of a strong online shopping experience. In Duluth's case, despite having fans of its brand nationwide, it only had nine stores at the end of 2015. In its 2018 annual report, management addressed its aggressive unit-growth strategy by saying the best way to fulfill the true promise of an omnichannel model is to build brick-and-mortar stores.

In 2016, 82% of Duluth's sales were direct (coming from either its website or catalog mailers). As the company has grown its store count, revenue is now split almost 50/50 between retail sales and direct sales. But it's not as if direct sales are falling victim to retail sales. On the contrary, both segments are growing. In the third quarter, retail sales grew 24% year over year, while direct sales grew a more modest 3%.

There are some concerns that investors will want to keep an eye on. Duluth hasn't been moving merchandise quite as expected, and it's begun to offer more promotional pricing than it would like. To focus on improving business fundamentals, the company is slowing unit growth heading into 2020. Entering the fourth quarter, investors should follow inventory levels. Inventories were up 39% in the third quarter as Duluth stocked shelves for the holiday season. Excessive promotional pricing, bloated inventories, or any combination of both could signal that the company moved too fast.

That said, Duluth trades at less than 15 times forward earnings. If the company reports that it got back to the basics and moved merchandise during the holiday season, today would be a great entry point for a nationally recognized and loved name brand.