The new year has just started, and it already looks like it's going to be a busy year for investors. The 2020 presidential election looms in the distance, and the energy markets and related stocks got a jolt Friday morning with news of the killing of Iran's top military commander.

January is almost always a prime month for investors who are recommitting themselves to financial goals and resetting their portfolios. For publicly traded companies, there's plenty of news on tap as holiday sales and fourth-quarter earnings reports come in.

With that in mind, keep reading to see why shares of Netflix (NASDAQ:NFLX), Macy's (NYSE:M), and Boeing (NYSE:BA) could be some of the top stocks making big swings this month. 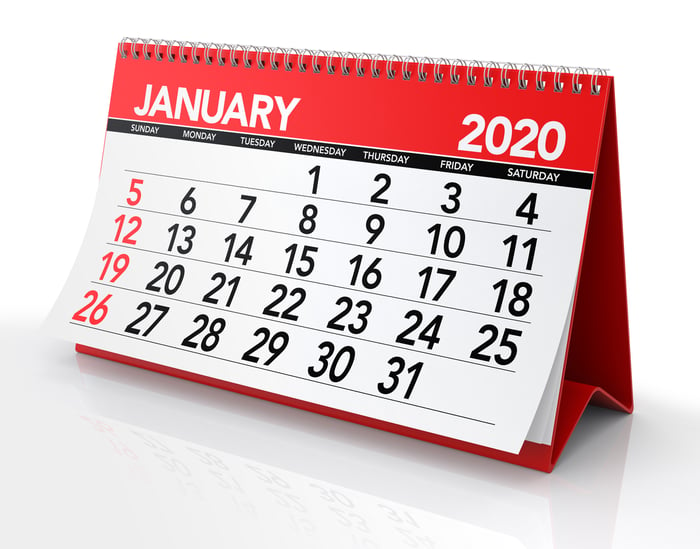 A lot's at stake for the leading streamer

Netflix is about to be tested on multiple fronts over the coming weeks. First, the streaming service hopes to take home some big wins at the Golden Globe Awards on Jan. 5. Three of Netflix's original movies (The Irishman, Marriage Story, and The Two Popes) are nominated for Best Drama Motion Picture, and a win in that category would help build momentum for Netflix to take home the Best Picture Oscar at the Academy Awards in February. Oscar nominations come out Jan. 13, so investors will be watching that date since an impressive haul of Oscar nominations could give the stock a bump.

Netflix is set to report fourth-quarter earnings on Jan. 21. The company's quarterly reports are always closely watched as the stock tends to move based on its subscriber growth. However, this quarter will be an especially big test for the company since it comes during the launch of Disney+, the rival streaming service that has already added more than 20 million subscribers, according to some estimates. Netflix's U.S. subscriber growth forecast was unusually low for the fourth quarter, at 600,000, a sign that the company expected some headwinds from the arrival of Disney+. However, Netflix will need to show that it can keep up its steady growth in the face of stronger competition in order to justify its high valuation. Weak domestic growth could send Netflix stock tumbling, while a strong quarter would restore investor confidence in it. That, combined with an Oscar win for Best Picture, could send Netflix soaring back to its all-time highs above $400.

The holiday season is always an important time of year for retailers, but few brick-and-mortar chains have more at stake this time than Macy's. The venerable department store chain was one of the worst-performing stocks on the S&P 500 index in 2019, losing 43% on the year. However, solid results during the holidays would do a lot to change the current narrative around Macy's stock. The stock has tumbled recently, as investors believe Macy's is unable to modernize and compete with more nimble retailers, while profits are fast disappearing. With most of its annual profits coming during the fourth quarter, much is at stake.

Macy's won't report full fourth-quarter earnings until February, but the company's holiday sales report, which reveals comparable sales during November and December and an update to earnings guidance, should be coming out within the next few days. Last year, Macy's holiday sales report was released on Jan. 10. Macy's earlier guidance for the fourth quarter implied a comparable sales decline of 1% to 2% for the period, a benchmark investors are watching.

Beyond the immediate impact of Macy's holiday performance, the results will also inform how many stores the company chooses to close -- as January is a popular time for retail closings -- as well as its general real estate strategy, as some investors have demanded that Macy's monetize its real estate more quickly. Considering how much its stock has fallen over the last year, a strong report would probably have more of an impact on it than a weak one, but this is a crucial opportunity for management to change the stock's story and show that the business is stable.

A manufacturer in disarray

Boeing's 737 MAX crisis continues to spiral further out of control. In the last month, CEO Dennis Muilenburg was ousted following a series of failed promises to get the plane flying again that irritated airlines, regulators, and the families of victims from the two crashes that caused the crisis. The company also said it would suspend manufacturing of the MAX jets starting in January, a move that seems to confirm the reality that it will be more difficult than the company anticipated to get the jets to pass regulatory muster.

The aerospace manufacturer begins the new year with Chairman David Calhoun set to assume the role of CEO starting on Jan. 13. Once Calhoun takes over, the company could begin to act more aggressively to get the MAX into compliance. That could include more writedowns (the company had a $4.9 billion writedown in the second quarter) for the jet as the company will need to gain regulatory approval before it can get back to meeting a backlog of over 4,500 MAX orders. Keep an eye for news out of Boeing the week of Jan. 13, since that could signal how soon the MAX could go back into production.

Finally, Boeing will report fourth-quarter earnings on the morning of Jan. 29. That will give Calhoun his first chance to address investors directly, but more importantly, investors will get a peek at the company's 2020 earnings guidance for the first time, giving Boeing the opportunity to assess the impact of the production suspension. Expect the stock to move on that news as well.

The 737 MAX crisis has been developing slowly since the second MAX crash in March 2019, and Boeing stock has been mostly stable following an initial dive. Investors should have a clearer picture of the stock's future over the coming year and beyond following Calhoun's appointment as CEO and the upcoming earnings report.