No, it's not the same as Ford vs. Ferrari, but the choice of investments between Ford Motor Co. (NYSE:F) or Tesla Motors (NASDAQ:TSLA) comes down to blue-chip value that under-performs versus big speculative growth. The only thing that truly makes Tesla different from the established car names is its reliance purely on electric engines. Some could point to things like the solar panel business, or energy storage, but 89.4% of third quarter revenues stemmed from car sales. This is a car company. Yet, the shares are valued as if it is something else. The EV factor is becoming less and less important, as the majority of automakers are adding electric models to their lineups to go along with their traditional cars.

So your choice depends on your style of investing and your overall strategy. Many investors who favor Tesla believe in a monumental shift, in which traditional automakers are being outmaneuvered by the "genius" of Elon Musk. The opposite school would say that Tesla isn't doing anything that the established names can't do as well; to that end, Ford carries the same potential, with a cheaper

Ford's appeal all comes down to one word: dividends. The stock yields 6.43% right now, and has a history of established dividend payments that Tesla can't offer. Outside of that dividend, the stock has been a complete dud. Over the last decade share have drastically under-performed the S&P 500.

In a comparison of revenue, Ford's growth rates are much lower than Tesla's. Ford's annual growth has been between 1.5% and 3.8% through the last few years; that pales in comparison to Tesla's 82% revenue gain in 2018. Of course, the flip side here is that Ford did $160 billion in sales in 2018, and Tesla did a little over $21 billion. The stock garners so much attention because of the company's growth rates, and its speculated potential. 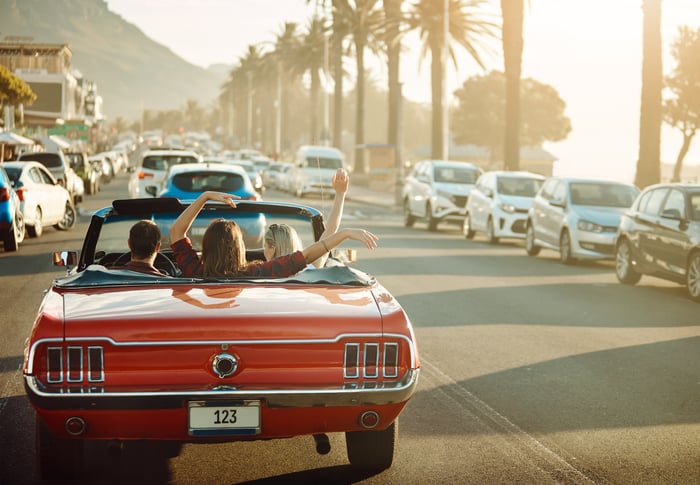 Earnings: Over time, Ford has been much more profitable, thanks to its more established nature and infrastructure; it's the better investment if you're looking for stability. Through the first nine months of the year, the company had net income attributable to stockholders of $1.72 billion, while Tesla had losses of $967 million through the same time period.

Stock performance: Over the last decade, Tesla shares have absolutely been the more successful play, increasing by 1,872% during that time; investors who got in at the beginning with Tesla are very happy people. In comparison, Ford shares have followed the trend of most major automakers, remaining at basically the same price levels as ten years ago.

The stories couldn't be more different

Ford is a far more established player in the car world, so investors treat the stock very differently than Tesla. Most of the big names like Ford, General Motors, or Toyota trade at very low price-to-earnings ratios. Sales and earnings mean a great deal to the way markets treat these stocks. In other words, investors aren't willing to pay big premiums, resulting in the stocks under-performing the market.

Tesla, on the other hand, has been treated with the attitude usually reserved for major tech stocks. The investment is predicated on electric vehicles happening very fast, and Tesla managing to outperform the plethora of EV options being put onto the market from established names. The market has demonstrated that investors are in love with the story, and the stock's volatility means it can experience big gains on good news.

These two stocks fall into such different investing strategies that to compare them as "this one vs. that one" feels a bit shortsighted. I personally dislike them both.

Ford is a blue chip that's an important player in the auto industry, but its shares are traded conservatively to say the least. It's a more diversified company, with great strength in the coveted pickup-truck market in the United States, but that diversification has hurt the company a bit, as traditional sedan sales plummeted to the point of being phased out. The big card for Ford is its financial stockpile of over $20 billion. It's just not clear what the company is going to do with it.

I'm not a Tesla investor because I don't like speculation; Tesla's pricing is very high for a company that doesn't currently produce profits. There was a little over $6 billion in shareholder's equity on the balance sheet at the end of the third quarter. In comparison, the stock carries a market capitalization of $80 billion. Where's the value? There aren't any earnings, so the performance of the stock is entirely predicated on sales growth and the promise of a grand future. The problem there is the stock is already priced for that future.

The moral of the story: Investing in Ford is an inefficient use of capital. The stock lags the market. Investing in Tesla has produced big returns over the past decade, but the financials behind the company don't really support what the stock has done. Ten years ago this stock was a steal. That is no longer true.