Target (NYSE:TGT) is one of the largest retailers in the United States, operating a chain of 1,800 stores and an online channel that markets a diverse set of fashion, home, healthcare, and grocery consumer items. The stock delivered a phenomenal 2019 for shareholders, where the share price nearly doubled to close out the year at $128. Target struggled from 2013 to 2019, with intense competition from the likes of Walmart (NYSE:WMT), Amazon (NASDAQ:AMZN), Costco (NASDAQ:COST), Dollar General (NYSE:DG), and Dollar Tree (NASDAQ:DLTR).

Target has struggled with flat revenue growth and margin compression in recent years, but financial results in 2019 were encouraging. The company is set to grow more than 4% on the top line for the fiscal year ending in January 2020, with earnings expected to rise over 18%. Analysts are forecasting continued modest revenue growth and roughly 10% earnings growth moving forward, both of which compare favorably to peers. The company is benefiting from more profitable small-format stores, a growing online channel, and same-day fulfillment services.

These trends are catalyzing investor confidence and driving shares higher, but a great charge by a relatively low-growth company can signal inflation of valuation metrics that push the stock firmly out of buy territory for value investors. 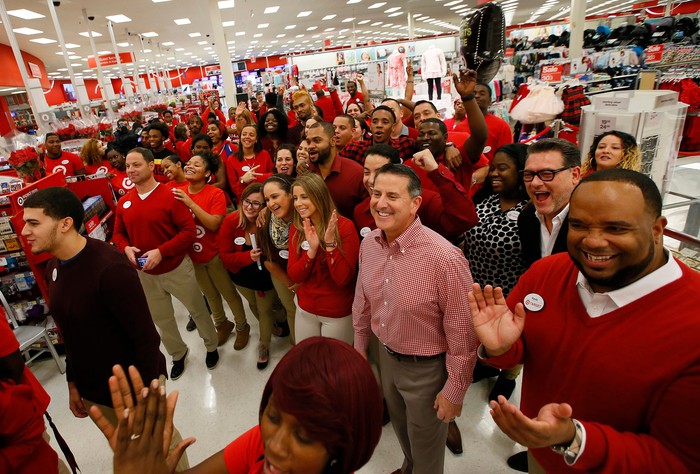 Target trades at an 18.3 forward price-to-earnings ratio, which is the highest for the stock since 2014 when it was 24.6. This figure is roughly in-line with the defensive retail industry average, and lower than Walmart, Costco and Dollar General. Target's 19.3 price-to-free cash flow ratio compares even more favorably to major defensive retail peers, as does its 10.95 EV/EBTIDA. Together, these suggest that the stock's stellar performance in 2019 has not driven it out of the reasonable range of valuation relative to multiple fundamental profitability metrics.

Target pays a 2.06% forward cash dividend yield, which helps deliver some modest return as income, independent of market performance. The company's payout ratio is below 50%, so it is reasonable to expect the dividends to be sustained. This yield is among the highest of the major defensive retail chains and is materially exceeded by only Big Lots at 4.18%. Target also supplements its cash dividend with a share repurchase program that has created a buyback yield between 2.5% and 10.8% since 2015. The anti-dilutive effect of repurchases helps to improve market price returns for investors.

There is still more room to the upside for Target

Target's growth outlook is roughly aligned with its brick-and-mortar peers, so it would follow that continued execution should allow the stock's valuation to approach that of its peers. Operational inefficiencies or financial health concerns could drive a pricing discount, but neither is particularly relevant to Target. The company's 12.9% return on invested capital is actually slightly better than the industry average and several peers with more aggressive valuations, and its 1.2 debt-to-equity and safe liquidity ratios indicate that there's no meaningful financial health risk at this time. Poor fundamental performance several years ago and the rise of e-commerce competition made investors sour on the name, and the recent rebound was just a return to confidence as investors begin to accept the turnaround.

There are still risks for investors to consider. Even though the company is considered defensive as a retailer of basic goods that are less sensitive to economic cyclicality, the stock very closely tracked the market during the downturn from 2007 to 2009. A recession is beyond the control of the company, and it is not immune to degrading market conditions that would make the above valuation analysis completely irrelevant. Competition is only going to intensify moving forward, and investors will be quick to abandon the stock if results do not continue to improve.