The recent quarterly report from struggling drugstore chain Rite Aid (NYSE:RAD) was encouraging enough...initially. Most top-line measures came in better than expected for the quarter ending in November, and per-share operating profits of $0.54 blew past FactSet's consensus figure of $0.07. It was a big win for new CEO Heyward Donigan, who only took the helm in August of last year.

Much of the triple-digit rally that took shape following the company's fiscal Q3 report posted on the 19th, however, has been given back in the meantime. Investors might now better realize that while the top line grew by $12.2 million year over year, a big chunk of last quarter's profit growth was the result of a $7.7 million reduction in operational spending. And a huge chunk of the company's revenue growth stemmed from increased Medicare Part D membership and wasn't necessarily spurred by any strategic initiatives that drove fresh discretionary spending.

In other words, Rite Aid might not be in full turnaround mode after all and instead remains the beneficiary of a "can't get any worse" condition.

If Donigan is to lead Rite Aid out of its rut and put it permanently back on the path of profit growth, two things have to happen. Neither strategy involves trying to go toe to toe with rivals like Walgreens Boots Alliance (NASDAQ:WBA) and CVS Health (NYSE:CVS). In fact, one of them includes teaming up with a frenemy. 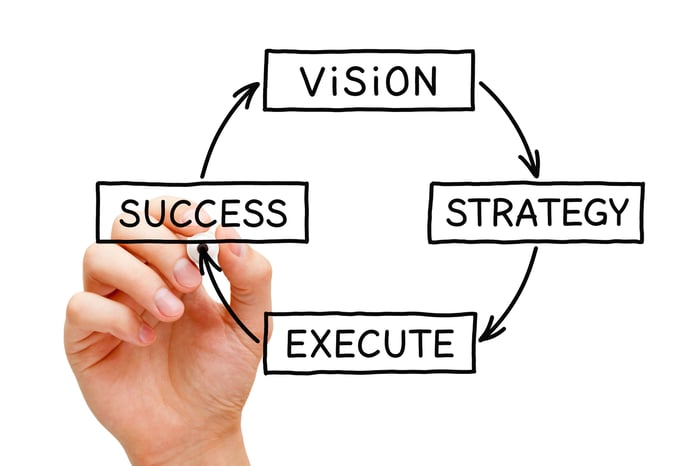 COO James Peters made a point of explaining during last quarter's conference call that the addition of Thrifty Ice Cream at 900 more Rite Aid stores was a key to last quarter's sales growth. It seemed irrelevant at first. The drugstore chain owns the brand, but it's one of thousands of products sold in the fronts of its stores.

The fact that the COO thinks enough about the impact of one initiative to highlight it, however, suggests the company might finally be thinking more seriously about its unique front-of-store offerings that draw shoppers in.

Donigan would certainly be wise to move in that direction, argues Dave Bruno, director of retail market insights for RetailWire. He writes, "In a market crowded with deep-pocketed giants (Walgreens, Target, Amazon, CVS) Rite Aid needs to continue to focus on ways to clearly differentiate their stores from the giants." Bruno goes on to say: "I don't think they can match their scale. Careful scrutiny of assortments, highly delivering personalized interactions and evaluating new value-added services are all items I would put at the top of my priority list."

Ricardo Belmar, senior director for global enterprise marketing and retail transformation specialist for Infovista, echoes the idea, explaining, "Rite Aid needs to focus on what will result in a differentiated customer experience as compared to their competitors."

Thrifty Ice Cream isn't the only addition shoppers will find at some locales. Amazon.com customers can now retrieve their purchases at most Rite Aid stores rather than having them shipped directly to their homes, where packages might sit unattended on doorsteps.

It's a tactic that's led to mixed results for other retailers. Department store chain Kohl's began handling Amazon's returns last year, hoping the additional foot traffic might lead to more spending while the consumer was in the store. The initiative didn't lead to the expected revenue growth, but Rite Aid's response might be different. Whereas Kohl's is a destination shoppers often visit to buy something specific, drugstores offer convenience for patrons who might only decide to make a quick purchase while they're in the store. Consumers might also opt to complete two different but common errands -- picking up a prescription and picking up a parcel -- in just one location.

The importance of such partnerships can't be overstated in the current retail climate. Carol Spieckerman, president of consulting firm Spieckerman Retail, notes: "With Walmart attacking health and wellness from every angle, Target forming partnerships with CVS, Kroger hooking up with Walgreens, and Amazon's ruthless ambition, the competition and encroachment that Rite Aid faces is unprecedented. Rite Aid would be wise to evaluate additional strategic partnerships for the short term to extend its presence and awareness into new markets."

To some extent, we've already seen Donigan embrace these two ideas, albeit subtly. Then again, it's only been five months since her arrival, so it may be too soon to press for sweeping changes.

On the flip side, it's never too soon for a company in Rite Aid's troubled situation to implement bold changes.

Whatever the case, last quarter's numbers might have bought some time, but the stock's retreat from its late-December high says the market remains fairly unconvinced the turnaround is on firm footing. Investors seem to know that if the company is going to dig its way out of trouble, it can't be a mere matter of financial engineering, and the pharmacy benefits unit can't do all the heavy lifting. Transformation is going to require the help of in-store operations and of front-of-store operations in particular. Differentiating itself and partnering up are two clear initiatives the company can work toward in that regard, although they don't have to be the only two.