Bull markets don't necessarily die of old age, but with a record-breaking 11-year bull run now under our belts, it would be naive to believe this one isn't running low on gimmicks and tricks to keep itself propped up. Remember, the Fed made three separate rate cuts over the course of 2019 as means of stimulating the economy, yet earnings growth was essentially stagnant during the third quarter. It may not require a full-blown bear market to hit the proverbial reset button, but a bit of market turbulence may well be in the works.

It's this sort of uncertain environment that merits focusing investments a little less on aggressive growth and a little more on reliable income. Four Dividend Aristocrats stand out as top prospects for investors looking to make this strategic portfolio shift as 2020 kicks off. Let's take a closer look at them. 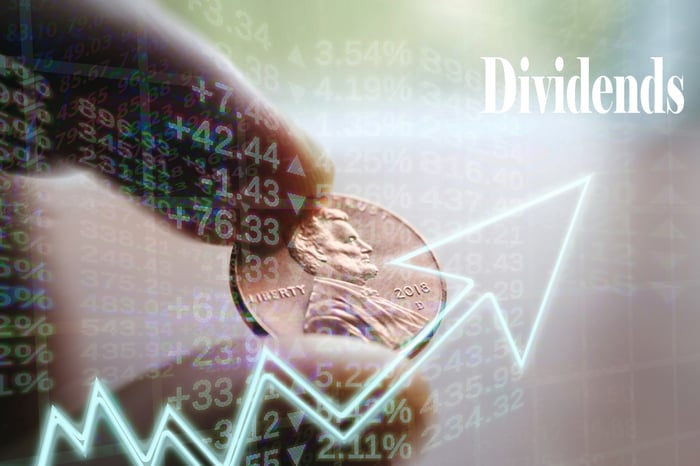 The United Technologies (NYSE:RTX) of today isn't the company it will be a year from now. That's because the organization's military/defense divisions Pratt & Whitney and Collins Aerospace will be merging with Raytheon, while its Otis (elevators) and Carrier (HVAC) units -- both of which are profitable -- will be spun off sometime in 2020. The move is expected to unlock value that's been difficult for investors to discern thus far.

It's a move, however, that could also improve the underlying dividend payment that currently translates into a yield of just under 2%. With greater focus and a fair chance to utilize their new nimbleness, both of the spinoff companies, as well as the aggregated Raytheon/Pratt & Whitney, should also find the performance improvements they've long been seeking.

Most lists of good dividend stocks include a utility name, and for good reason. Right now, Consolidated Edison (NYSE:ED) is the pick of the litter with its 3.3% dividend yield.

It's not a difficult idea to get behind. Consumers may postpone the purchase of a new car should incomes shrink. A recession might prompt a family to take a "staycation" rather than a vacation. But, it's rare that someone will forego lighting by discontinuing their electric utility service.

That doesn't mean Consolidated Edison's top and bottom lines have always moved forward with a perfect linear trajectory, surprisingly enough. Profits can ebb and flow, and revenue can ebb and flow even more, as rates and power-production costs change. But the long-term earnings trajectory points reliably higher, and there's more than enough of a cushion to let the company maintain its dividend growth without dipping into its proverbial piggy bank. For the $3.51 per share earned over the course of the first three quarters of 2019 (a fairly typical year), only $2.22 of it was dished out as dividends. That amount of wiggle room is one of the reasons ConEd has been able to raise its dividend for 45 consecutive years.

Consumers may not be quite as loyal to their preferred brand of bleach as they are to their utility company. But it's a relatively close contest -- just for a different reason. Although they may not be willing or able to shell out thousands of dollars for a new automobile, most consumers can scrape together a couple of extra bucks to spring for the premium cleaning supplies and consumables they know work well.

Enter: The Clorox Company (NYSE:CLX). Contrary to the easy assumption to make, it's not just bleach anymore. Clorox is also the parent company to Fresh Step cat litter, Liquid-Plumr, Pine-Sol, Glad trash bags, and more. None of them are absolute must-haves, but they're all brand name products that benefit from the carefully crafted customer loyalty that's supported uninterrupted dividends -- and dividend growth -- going back to 1986. Newcomers will collect a yield of 2.8% on their investment.

Yes, AT&T (NYSE:T) has myriad challenges it's now being forced to address with less-than-elegant responses. Chief among its headaches is an acquisition of DirecTV that hasn't panned out as hoped, and an acquisition of Time Warner that may or may not salvage the company's original television ambitions for DirecTV.

The company's paid the price for its missteps in the form of a major setback for the stock. Even with last year's rebound factored in, AT&T stock is still 10% below its 2016 peak while the S&P 500 is up more than 50% for the same timeframe. It's arguable, however, that investors have more than priced in the telecom company's worst-case scenario. Even though it's late to the party with a decidedly marketable ("decidedly marketable" are the operative words) over-the-top streaming television service, AT&T at least now has the advantage of learning from everyone else's streaming video mistakes. In the meantime, it appears to be leading the 5G race with millimeter-wave coverage now available in a market-leading 35 cities. Wireless telecom has always been a more important business for the company anyway.

New buyers will enjoy a 5.3% dividend yield on their investment, and after 36 consecutive years of dividend growth, there's little reason to not expect rising payouts going forward.