"The hallmark of this quarter was a more competitive environment with more switching going on," Carter said at an investors' conference. "And when you have the higher switching pool, i.e. churn's going up across the board, it is much more cost effective for us to grow and scale this business."

In other words, T-Mobile fully expects to lead the industry in postpaid phone churn, but if churn was higher across all of its competitors, it would have a greater opportunity to win more gross subscriber additions. That would ultimately lead to greater overall net additions than in a low-churn environment.

T-Mobile may get its wish in 2020. The rollout of 5G networks represents an opportunity for customers to evaluate their network provider and potentially make a switch. 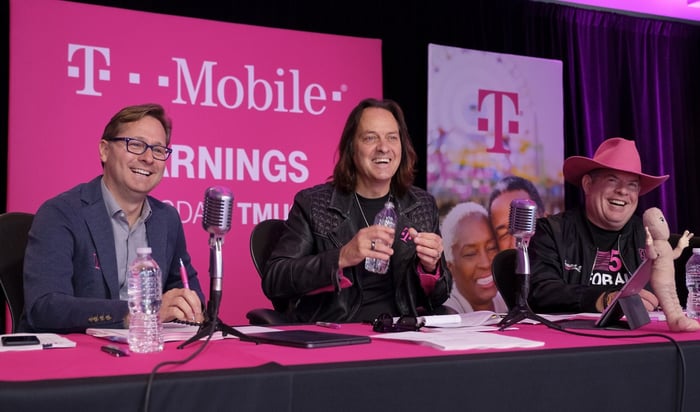 As T-Mobile improved its churn rate throughout 2019, investors saw its gross subscriber additions shrink considerably. T-Mobile's management assured investors that it could drive greater gross additions if it had to utilize promotional offerings as it had in the past, but it finally put its money where its mouth is in the fourth quarter.

T-Mobile's 1 million net postpaid phone additions topped each of the first three quarters of the year. And its total postpaid additions of 1.7 million was a significant step up from both the prior three quarters as well as the fourth quarter last year. That's despite the higher churn rates for the company.

"We went out and grabbed a big year-over-year gain in activations to offset a slight increase in our own churn, and delivered a fantastic quarter. And [it] shows you that our model is flexible," COO Mike Sievert said.

T-Mobile grabbed a good chunk of subscribers by increasing its level of promotions. It wasn't the only company, though. Verizon (NYSE:VZ) notably struck a deal to offer Disney's new streaming service, Disney+, to its subscribers for a year. The increased level of promotions may have had a noticeable effect on T-Mobile's financials, which it left out of its pre-announced quarterly results. Investors should look for how promotional activity may have affected its operating income and cash flow.

T-Mobile's fourth-quarter results show it's more than capable of again ramping up gross additions with promotional activity. In the long run, however, management feels building out the best network, particularly the best 5G network, will ultimately win more subscriber additions than short-term promotions.

"Nothing matters more than network," Sievert said. "But nothing drives you in the store tomorrow morning like a promotion ... If you wanted to maximize this quarter's results, you would only advertise promotions. But it'd be stealing from tomorrow. And we were able to mix that much more in favor of long-term brand-building messages, and yet still deliver the end-quarter results."

T-Mobile put a significant focus on the rollout of its 600 MHz network and 5G rollout in its fourth-quarter advertising. While it also included iPhone promotions and other promotional offerings, it weighed more toward a focus on the network. By comparison, Verizon, which historically focuses on its network, shifted to more promotional offers like the aforementioned Disney+ deal.

That shift is notable, especially as new devices come to market supporting the industry's 5G networks. The shift to 5G in 2020 may cause an increase in switching as consumers seek the fastest networks with the best coverage, not necessarily a deal.

T-Mobile has been laying the groundwork to establish itself as a network leader with consumers -- an area where it's historically lagged in consumer sentiment. If it can successfully navigate higher churn in 2020 without as many promotions (due to its strong network), it could be a very good year for T-Mobile both in terms of net additions and operating income growth.