Rockwell Automation (NYSE:ROK) is certainly not an unknown name. The robotics company has been around in one form or another for decades, and it has quietly had a hand in manufacturing many of the things we use on a daily basis. On the other hand, it's not exactly a proverbial household name among investors. While it sports a respectable market cap of $24 billion, it's usually not the growth engine most investors seek.

Now would be a wise time to add Rockwell to your watchlist, though, if not your portfolio. While the robotic automation movement has been underway for a while, the next few years could be surprisingly solid ones for the company and its peers. Market research firm IDC's three-year outlook for the industry is bold, but more than that, the fog of confusion that's clouded the robotics business for a while may be about to lift.

Rockwell Automation is hanging on, biding its time

From automobiles to paper to food to energy and more, Rockwell makes mechanical processing more efficient and cost-effective. Not only does it offer a variety of motion control solutions, it also provides the back-end software to put its hardware into action. In fact, of last quarter's $1.73 billion worth of revenue, 45% of it was driven by software and control products, while 55% of it came from mechanical products. 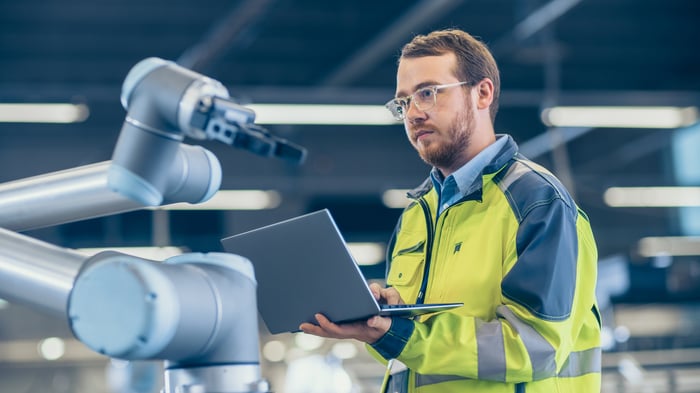 The quarter itself was lackluster; organic sales grew about 1%. But the company's guidance sent the stock skyrocketing. Rockwell Automation says this year's sales should more or less be in line with 2019's top line, which will be enough to drive operating earnings of between $8.70 and $9.10 per share, also in line with fiscal 2019's $8.67. The market was braced for worse, fearing the tariff war with China and its ripple effect would crimp results.

Yes, in this environment, not losing ground is seen as a win.

Even so, it's arguable that the company and its peers like Cognex (NASDAQ:CGNX) and ABB (NYSE:ABB) may be due for more growth ahead than investors readily see. Two pieces of anecdotal data point in this direction.

The first clue that investors may be underestimating Rockwell is rooted in IDC's outlook for the robotics and automation market. The market research outfit believes $128.7 billion will be spent on robotics and drones this year, and while drones will see faster growth, automation makes up the lion's share of the expected spending. IDC forecasts $112.4 billion will be spent on automation solutions in 2020, and further believes that this spending will swell at a compounded annual growth rate of 17.8% through 2023.

It's not just robotics hardware, though. As IDC's Remy Glaisner explains in the outlook, "Software developments are among the most important trends currently shaping the robotics industry. Solution providers are progressively integrating additional software-based, often cloud-based, functionalities into robotics systems."

It's a nuance that fits very well with what Rockwell Automation has been adding to its operations for a while now and continues to build. Not only does it offer software, but it's also been teaming up with some of the biggest names in the technology sector to make sure its wares are the best option available to manufacturers. In November, for instance, it unveiled its Digital Partner Program, which brings names like Accenture and Microsoft into its technical loop to fully accomplish CEO Blake Moret's goal of "Seamlessly connecting all levels of a business and turning raw data into powerful insights ... when devices are integrated and data is standardized."

The automation industry is starting to play favorites

While IDC's outlook is compelling, the tailwind is only made complete by a subtle shift in the automation market's landscape. That is, after years of multiple standards and maturation of the underlying technology, manufacturers are starting to gravitate to solutions that work best.

The shift is taking shape in many forms, though arguably the most meaningful one is the waning interest in collaborative robots, or cobots, for short. Realtime Robotics Director of Product Development Chris Harlow explained last month, "Demand for power and forced limited robots (cobots) has peaked due to reduced functionality and capabilities." Instead, he says: "Industrial robots will become more persuasive as they will become significantly easier to program. As robotic automation expands into new industrial areas like logistics and electronic assembly, this will be essential to facilitate widespread adoption."

It's not just cobots, though. Machine learning and artificial intelligence will take center stage of the robotics market. The advent of 5G and edge computing will play a role. Leaps in gripping technologies will be made. New robotic tasks will be taught. As RightHand Robotics Head of Product and Marketing Vince Martinelli put it, "2020 will go down in automation history as a pivotal year for robotic piece-picking systems."

All these trends work well for Rockwell and modules like its FactoryTalk Analytics LogixAI, which facilitates machine learning without difficult AI coding.

Analysts are modeling 3% revenue growth for this year and next, mirrored by similar EBITDA and per-share earnings growth outlooks. The company's guidance is about as lethargic, even if it was expected to be worse headed into last quarter's report. 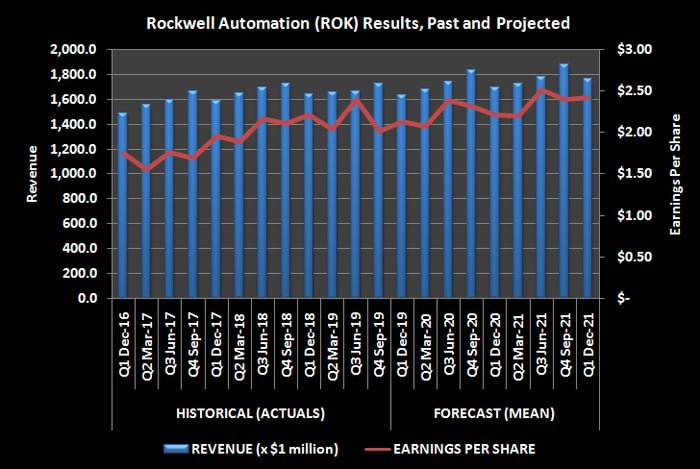 There may be more going on in the background than is evident with just a quick glance, though. While a true global recession could potentially steer Rockwell Automation off course, the stage is currently set for more rather than less strength, with no significant threat of economic turbulence ahead. Indeed, automation generally lowers production costs, so a modest recession may impose very little adverse effect.