ExxonMobil (NYSE:XOM) and Royal Dutch Shell (NYSE:RDS.A) (NYSE:RDS.B) are two of the largest integrated oil and gas companies in the world. With rich histories that date back to the beginnings of the discovery, marketing, and mass production of oil, Exxon and Shell are largely responsible for shaping the developed world into what it is today.

Yet a brutal oil downturn that peaked in late 2015 and early 2016, environmental concerns surrounding the long-term implications of oil-based economies and oil spills, and workplace safety concerns contributed to a disappointing decade for Exxon and Shell. With the new decade upon us, it's time to determine which company has best learned from the past to better position itself for the future. 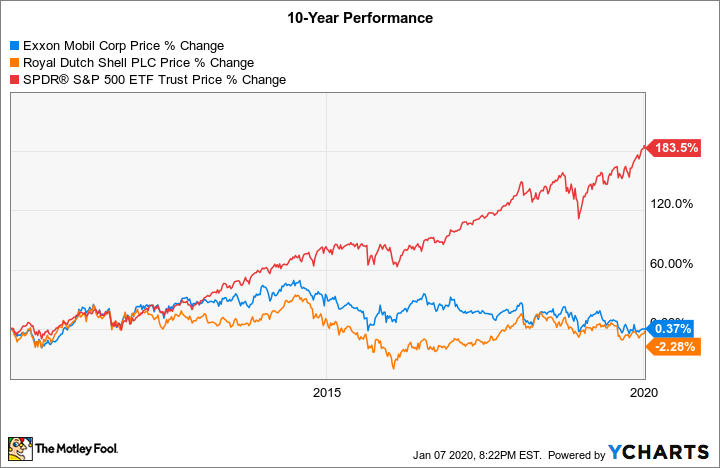 ExxonMobil and Shell stack up similarly in size and scope, but the companies are on two different trajectories over the long term. Exxon prides itself on innovating to be the best oil and gas company in the world, whereas Shell sees a future in renewables and, according to Bloomberg, led supermajors in clean energy investments last year. Shell's focus is mainly on electric power generation through solar and further "electrification" efforts like charging stations for electric vehicles. 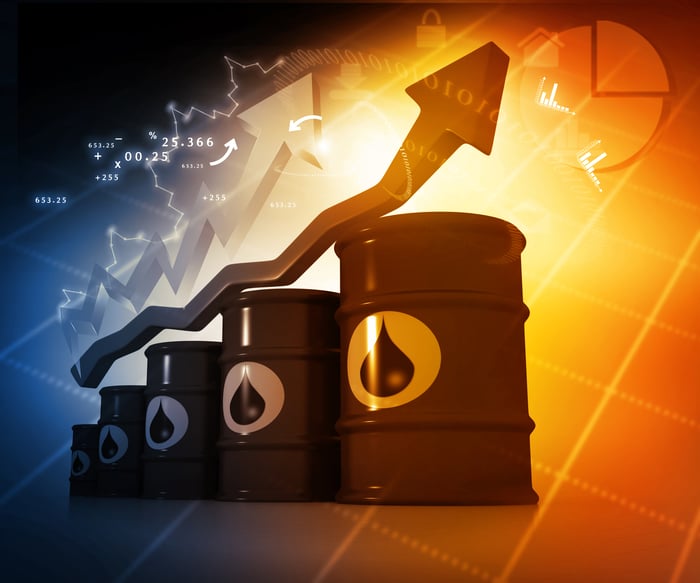 To Exxon's credit, the company placed fifth for innovation in the Management Top 250 ranking by the Drucker Institute at Claremont Graduate University, the only non-tech company in the top five.

Exxon continues to gain patents and target efficiency improvements, a much-needed effort since the oil and gas industry is home to some of the most complicated engineering problems in the world. On top of the complex nature of the industry, oil and gas companies are pressured to return more profitability, but also less environmental harm -- a challenge in its own right. Although Exxon is making some serious investments in biofuels and carbon capture and storage, its main focus is based on a belief that the future of energy will require oil and gas for years to come.

Shell and ExxonMobil are both investing heavily in natural gas, a bridge fuel between longer-hydrocarbon chain fuels and renewables. Natural gas has been on the rise in the United States and now comprises over a third of U.S. electricity generation, more than coal. In 2019, coal consumption in the U.S. fell to its lowest level since 1975  as old coal plants are being converted to natural gas plants or decommissioned in favor of building plants outfitted with natural gas power generation capabilities.

Starting in 2018, Shell's integrated gas business emerged as the dominant sector in the company's portfolio, replacing downstream to make up the majority of net income for the last seven quarters. Exxon is also making multi-billion dollar investments into natural gas, and both companies see a bright future ahead for the growing liquefied natural gas (LNG) market.

The growth of U.S. natural gas is impressive but pales in comparison to opportunities elsewhere in the world. Many coal-reliant developing countries are seeking to increase their use of cleaner-burning fuels like natural gas and renewables. LNG is a way for these countries to import clean-burning natural gas, at scale.

Shell is the largest LNG producer out of the integrated oil and gas supermajors. The company's LNG portfolio consists of mega projects like its 30% stake in Qatargas 4, a partnership between Shell and Qatar Petroleum that delivers approximately 7.8 million tons of LNG per year. LNG Canada, which was greenlighted in October 2018, will be one of the largest liquefied natural gas investments in Canada when it comes online in 5-6 years. Prelude FLNG is Shell's first floating liquefied natural gas facility and the largest ever built. Off the coast of Western Australia, Prelude makes it possible to tap into previously unreachable offshore gas fields in the Pacific Basin, which is the largest source of current LNG supply in the world.

In sum, the future of natural gas and LNG domestically and abroad is a future that Exxon and Shell are well-positioned to be a part of.

Although Exxon and Shell are fairly similar in their business models, Exxon is the larger of the two and operates with a lower net debt position. Exxon has also raised its dividend for 36 years in a row while Shell hasn't raised its dividend since 2014. That being said, Shell's cash flow and P/E ratio aren't just better than Exxon, they are better than other supermajors including Chevron, BP, Total, and Eni. Shell also has one of the highest dividend yields of the bunch at over 6%. Shell's P/E ratio places the company in value stock territory, especially considering the strength of its earnings power. That being said, Shell is unlikely to raise its dividend anytime soon given the current high yield and focus on other expansion efforts on the renewable side.

ExxonMobil and Shell are both solid oil and gas companies, but Shell's gradual shift into natural gas and renewables and strong LNG portfolio are positioning the company to be an all-encompassing energy company in the future, not just oil and gas. Exxon's history of dividend increases and devotion to oil and gas is probably a good investment for anyone focused on income rather than growth. That being said, Shell's low P/E ratio and over 6% yield is something every investor can get behind, making Shell the better buy of the two.