When the last recession hit the U.S. economy in 2007, Starbucks (NASDAQ:SBUX) faced a challenge. The company had become hugely popular and had grown to accommodate demand. However, it had also become overly confident and wasn't prepared for the approaching headwinds.

When the company began to see slowing sales and unprofitable stores, former CEO Howard Schultz took back the helm and proved the company could withstand a recession. With a robust economy, the company will keep growing, but in the event of another recession, Starbucks has a strategy in place as part of its culture.

Facing declines for the first time

Starbucks saw declines start in 2008, but they exploded into sharp drops in 2009. Here are the numbers for the three previous years as well:

The huge two-year decrease was followed by a dramatic turnaround. Was it just that the economy improved the following year? Or did Starbucks create something that helped it gain ground? 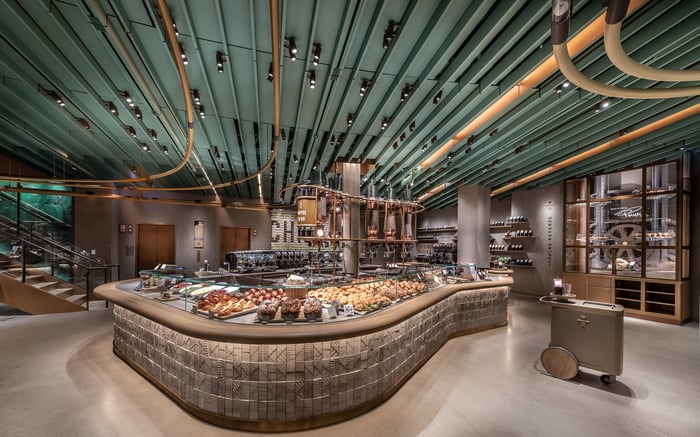 Many experts say that a company like Starbucks, which serves expensive coffee, is one of the first to suffer in a recession: Customers can easily cut back on cups of coffee, which they can purchase elsewhere for a fraction of the price or brew at home.

When the recession hit in 2007, Starbucks was not at all prepared, and saw a decrease in growth for the first time. In fact, it had been too confident and expanded too quickly, giving in on its core values to spur faster growth. When the downturn came, the company was in a compromised position.

Fortunately, Howard Schultz returned at that point to realign the company's values, and make its stores places where customers would want to come in and spend their money, to give themselves that small luxury. And things have been looking up since.

Starbucks is now in a similar situation, having grown its store count to more than 31,000 stores worldwide with $26.5 billion in sales. The difference is that it now has a strategy in place for charging through a downturn in the economy.

At the time -- before the company knew that these were the right decisions -- Schultz said:

Our blueprint for change was the transformation agenda: improving the state of our business through better training, tools and products; renewing our attention to store-level economics and operating efficiency; reigniting our emotional attachment with customers; and realigning Starbucks organization for the long term.

This is the fuel for the company's growth now, and will continue to power this restaurant stock through potentially troubling times.