Now we know why new Bed Bath & Beyond (NASDAQ:BBBY) CEO Mark Tritton swung a chainsaw through the executive offices last month: The home goods retailer's fiscal third quarter earnings report was a disaster, with sales and earnings coming in even worse than expected.

Not that it was ever looking very good, but Bed Bath & Beyond reporting sales down 9% in the quarter and opening up a huge loss doesn't bode well for the retailer. 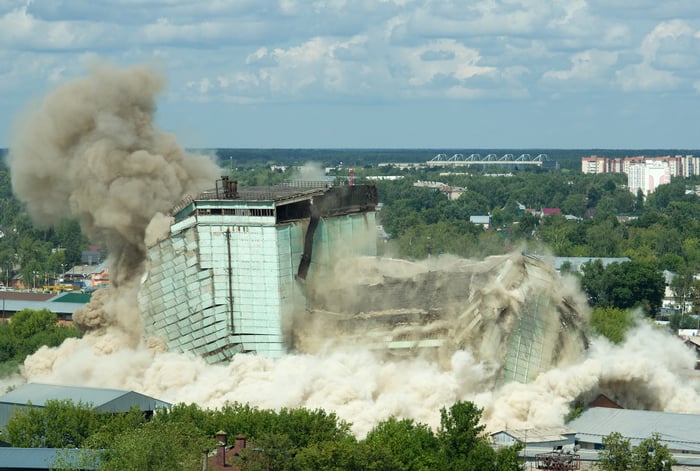 Almost immediately after taking over the CEO role, Tritton cleaned out the C-suite by ousting six executives who were responsible for leading the retailer's turnaround. As it happened right before Christmas, it suggested the holiday period wasn't going well.

It underscored just how bad things were when it announced earlier this week that it was selling half of its real estate to a private equity firm in a bid to raise cash. While it will lease back the property from Oak Street Real Estate Capital under long-term leases, Bed Bath & Beyond's sudden need to infuse its financials with $250 million in cash, while at the same time lightening its balance sheet by shedding assets, showed how much it's struggling.

That was borne out by its earnings report that saw net sales fall 9% to $2.76 billion as comparable store sales plunged 8.3% in the quarter. It marks the fifth consecutive year third quarter comps have fallen -- the last time Bed Bath & Beyond saw positive comps for the period was back in 2014 -- and worse for the retailer, the declines are now accelerating, with each succeeding quarter getting progressively worse.

Comps were down 6.7% in the second quarter and 6.6% in the first. A year ago they were down just 1.8%, so it seems things are spiraling out of control now, and even on the digital front sales were down by mid-single digit percentages.

The quarter's net loss was $38.6 million, or $0.31 per share, and that included a benefit it received from having marked down the value of inventory it held. In comparison, last year it reported a profit of $24.4 million, or $0.18 per share, though that also had a one-off benefit baked in from the sale of a building.

Eliminating both of those one-time events, Bed Bath & Beyond reported losses of $0.38 per share versus a profit of $0.02 per share a year ago.

Big ideas on the horizon

While the new CEO is still getting his sea legs for the wildly listing retailer, the plan discussed during the earnings conference call to get the ship righted again doesn't offer much more than platitudes to fixing the business.

Tritton outlined five broad "pillars" that would be tackled, but it was more catchy phrasing and alliteration than anything an investor could focus on. He told analysts Bed Bath & Beyond would be focusing on product, pricing, promise, place, and people, and said more details would follow in the spring.

Although Tritton said the previous turnaround plan was solid, assurances that it was making progress obviously were premature, so he will need some time to put his own stamp on the company. Still, without anything definitive to go on, investors shouldn't count on these broad ideas to make a difference.

The retailer is certainly not hopeful change will happen soon and said the pressures it's faced so far will continue at least through the fiscal fourth quarter. But things were so bad, and because big changes need to be made, it has withdrawn its full-year outlook.

But first, more pain to come

As Tritton noted, Bed Bath & Beyond still has substantial brand value, and it owns incredible mind share with consumers. The problem is that the retailer is no longer relevant to how customers shop, and between mass merchandisers and online retailers both targeting the space, there has been nothing to allow Bed Bath & Beyond to stand out.

That he recognizes this and wants to make big changes in how the retailer responds is notable and worthwhile, but whether Bed Bath & Beyond has taken on too much water at this point is the big question.

We'll likely see more real estate sold off, and there are store closings coming, though 20 less than originally planned as the company wants to use those locations to get rid of inventory over the first half of the coming year. They'll likely be put back on the chopping block once they serve their purpose.

That means there is still a lot of air below Bed Bath & Beyond, and the big drop its stock suffered after the markets closed following the earnings report is probably not where we will see the retailer finally settle.