Beyond Meat (NASDAQ:BYND) stock is enjoying a nice pop this morning -- and you can thank Snoop Dogg for that.

This morning, restaurant chain Dunkin' (NASDAQ:DNKN) announced a national TV advertising campaign featuring the rap star promoting the chain's new Beyond Sausage Sandwich, which uses Beyond Meat's plant-based protein. The company also said it will be giving out free samples of the new menu item on Jan. 24 and 25. 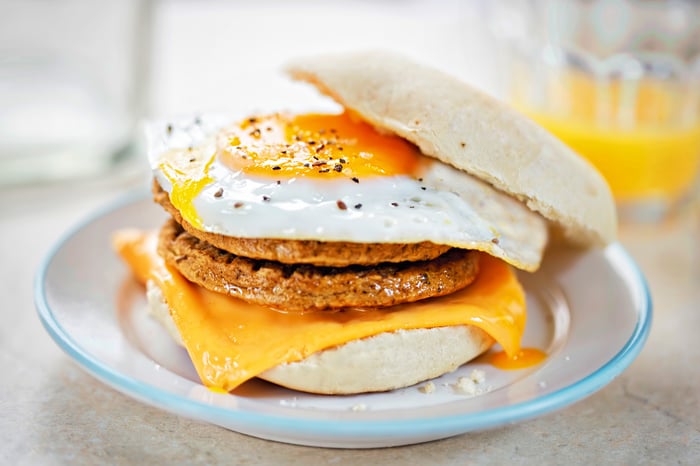 In its press release, Dunkin' notes that Snoop is both a "Beyond Meat Ambassador" and a Beyond Meat shareholder, and that may have helped to catch investors' notice. Still, the reaction of Dunkin's share price to the announcement -- or rather, the complete lack thereof -- may be telling.

Dunkin' Brands investors, at least, seem to be viewing this menu addition as a non­event -- even with its high-profile pitchman. Therefore, one might reasonably assume that the market wouldn't expect it to do much for Beyond Meat, either.

On the other hand, Dunkin' is a $1.35 billion a year business, while Beyond Meat moved only $230 million worth of its plant-based protein over the past year. Mathematically speaking, it won't take as much of a sales increase to "move the needle" at Beyond Meat as it would to do so for the six-times-larger Dunkin'. While I'm not sure adding a new fast-food chain to its client list is worth a 10% price pop for Beyond Meat shares ... it could be worth at least something.