What a strange year Xerox (NYSE:XRX) had in 2019. The office equipment maker's stock rose 86.6% last year, according to data from S&P Global Market Intelligence, but it was anything but a smooth climb.

Xerox shares rose 43% in January, lifted by a generally positive market trend and a strong fourth-quarter report. Xerox also saw analyst firm Citi's arguing that the company might be an attractive buyout target, having proven that its turnaround efforts were bearing fruit.

That prediction felt ironic in November, as Xerox launched a buyout bid of its own for much larger rival HP Inc. (NYSE:HPQ). In a mostly debt-powered offer of approximately $22 per HP share, Xerox hoped to create a titanic seller of workstations, printers, and copiers. HP's board of directors rejected the offer, saying that it undervalued HP significantly. But Xerox has not abandoned the original deal, turning it into a hostile takeover process instead. Last week, the company secured $24 billion of financing from a consortium of global banks, reassuring HP's investors that Xerox will be able to make the proposed payments. 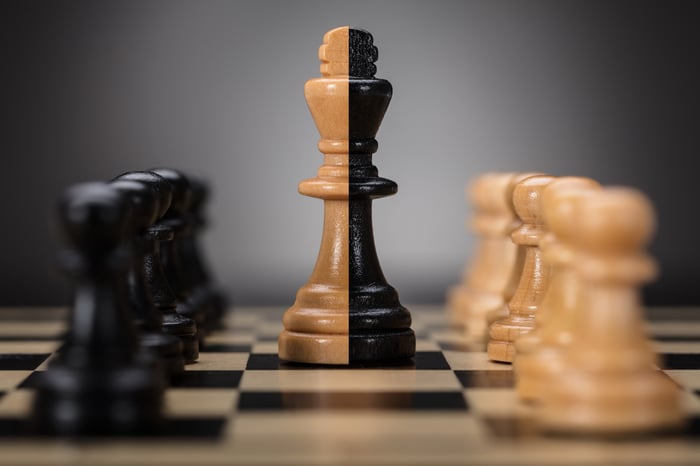 Investors are largely ignoring the HP buyout drama at the moment. HP's shares have gained a measly 10% since the initial bid-powered pop while Xerox shares have taken a 6% haircut. These small moves amount to atmospheric noise over a two-month period.

Whether Xerox manages to close the deal or not, fellow Fool James Brumley argues that HP's shareholders should take the buyout-boosted money and run. The same might be true for Xerox since the stock nearly doubled in 52 weeks even though its top-line sales are dwindling. This proposed merger of troubled tech giants is unlikely to trigger any game-changing synergies. Not to gild the lily or anything, but Xerox is putting some mighty fine lipstick on the pig here.