Casper Sleep is the latest direct-to-consumer retailer filing to go public. Its S-1 filing warmly welcomes readers to the "Sleep Economy" and dives into the various financials, risk factors, and growth outlook for the company.

While Casper and its bankers haven't set a date or price for the IPO, it raised $100 million at a valuation of about $1.1 billion in Series D round of funding led by Target (NYSE:TGT) in March 2019. (Target also bought shares in 2017's Series C funding round.) With 20% revenue growth through the first nine months of 2019 and the stock market trading at all-time highs, investors should expect Casper Sleep to seek an even greater valuation.

In the meantime, investors should consider the mattress company's potential for growth and whether that billion-dollar-plus valuation makes sense. Here are three key takeaways from Casper's IPO filing. 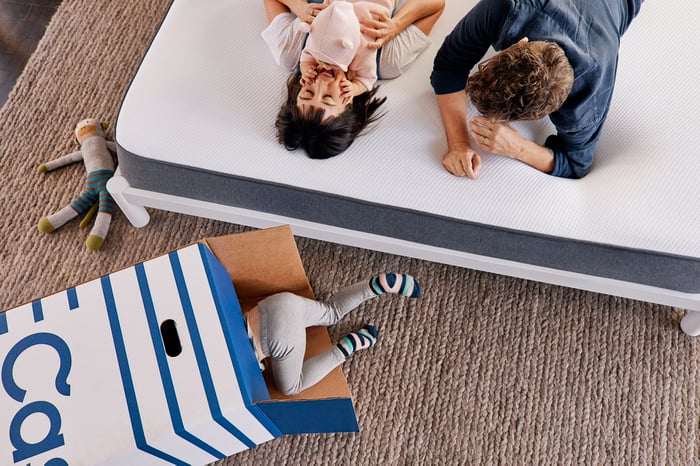 1. Growth is all about marketing

Casper relies heavily on its brand name to sell its mattresses and other sleep products. The strength of its brand is exemplified in its gross margin, which climbed to nearly 50% in the first nine months of 2019.

But relying on its brand for sales and profit margin is a precarious position. The company must spend a lot on marketing in order to grow sales. Last year, it spent over $126 million on marketing and sales, and it's spent nearly $114 million through the first three quarters of 2019. That's up 22% year over year, and revenue grew slightly slower at less than 21%.

That's a pattern that doomed another direct-to-consumer company, Blue Apron (NYSE:APRN), which saw sales tank after it pulled back on its marketing spend. Blue Apron failed to differentiate its product to the point where it established lots of repeat customers, which is necessary for a subscription business.

Casper's management is optimistic it can improve marketing efficiency. "As we continue to grow and scale, we believe we will continue to improve the efficiency of our marketing investments," management wrote in its S-1. "We believe that with larger budgets and deeper experience, we will benefit from lower media rates and increased data that will improve our proprietary models, multi-channel synergies as our retail stores and retail partnerships grow consumer awareness, purchase occasions as our product and services assortment expands, and purchases from previous repeat consumers."

While Casper's 2019 marketing spend hasn't quite paid off in the top-line growth investors might have expected, one area of investment appears to have had an outsize impact on its results. Casper's expanding its physical store footprint, as well as its footprint in partner retailers, including Target (also an investment partner).

The company currently has 60 stores in North America and says that stores that have been open for a year or more are already profitable. Overall, it projects new stores to have a payback period of between 18 to 24 months.

Most importantly, stores help grow sales. "We believe our multi-channel expansion creates synergies and that these channels, to date, have proven to be complementary, not cannibalistic." Management points out sales in cities with its own branded stores grew twice as fast in 2019 than those without.

The company believes there's an opportunity to expand its physical retail footprint to 200 stores in North America.

At the same time, wholesale partnerships like its deal to sell mattresses in Target stores and 17 other retailers play an increasingly important role for Casper. Wholesale distribution accounted for 17% of its total revenue through the first three quarters of the year, up from less than 12% during the same period in 2018.

One more thing Casper wants investors to be aware of is that it's still just taking a sliver of its total addressable market. Casper sees itself participating in the "Sleep Economy," which it suggests encompasses everything from mattresses and pillows, to bedroom furniture, to sleep accessories and devices, to health supplements and services to help people fall asleep faster and wake up more easily.

Investors should be wary of companies defining massive addressable markets, though. Blue Apron, for example, originally defined its opportunity as all consumer grocery and restaurant spending. It turns out Blue Apron's product doesn't exactly replace either of those perfectly.

That said, Casper's entering a much more predictable market. The value of a good mattress is easily understood by consumers; the value of a meal kit -- not so much.

Casper's efforts to grab share of the "Sleep Economy" have paid off so far. It's clearly growing faster than the overall market, even if growth is slowing down. It also reports 16% of its customers have returned for a second purchase despite the fact that the company hasn't been around longer than the life cycle of most of its products.

There are some things to like about Casper's finances and growth plan, and there are some warning signs as well. Overall, Casper looks more promising than other direct-to-consumer companies like Blue Apron, which had some big red flags when it filed its S-1. But investors will certainly need to wait and see how the market values the company.