General Motors (NYSE:GM) said that its sales in China, the world's largest new-car market, fell 15% in 2019 amid tough market conditions -- and the automaker expects those conditions to continue in 2020.

GM and its joint-venture partners sold 3.09 million vehicles in China in 2019, a steep decline from the 4 million it sold in the country just two years earlier.

Retail sales were down year over year for all of GM's China brands in the fourth quarter, and for all except Cadillac for the full year.

What happened with GM in China in the fourth quarter?

As was true for much of 2019, the sluggish Chinese economy, intense competitive pressure in mass-market segments, and the ongoing trade-war talk between the Trump administration and the Chinese government all put pressure on GM's sales in the fourth quarter. 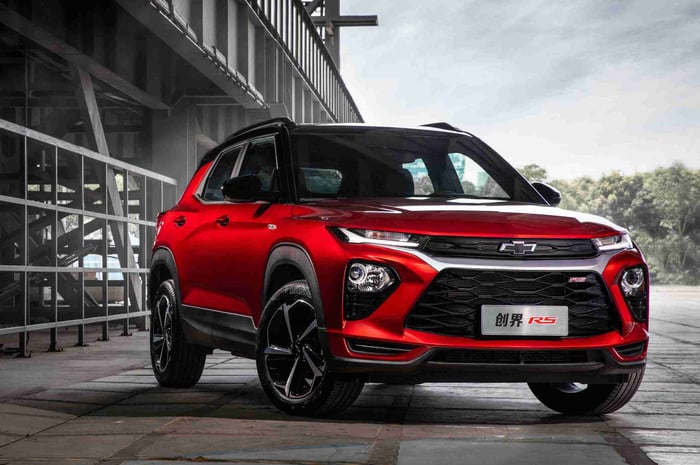 The small Chevrolet Trailblazer is one of several all-new crossovers that GM launched in China in 2019. A version of the Trailblazer will arrive at U.S. dealers this spring. Image source: General Motors.

GM's plan to offset those pressures has been fairly simple: Launch new products in China, focusing on crossovers and SUVs, in hopes of drawing more buyers to its dealer showrooms while boosting margins. The results so far have varied by brand:

GM will provide detailed full-year guidance with its fourth-quarter earnings on Feb. 5, but the message is already clear: Don't expect things in China to get better anytime soon.

"We expect the market downturn to continue in 2020, and anticipate ongoing headwinds," GM China President Matt Tsien said. He said that GM China will stay focused on rolling out new products and keeping costs under control for the time being.

As with any well-run automaker in a downturn, GM's goal here will be to win as many sales as it can with the best profit margins possible under the circumstances. 2019 was rough, but the company's strong long-term record in China inspires some confidence.

The main takeaway for auto investors: GM lost ground in China in 2019, but it's taking the right steps to hang on until conditions improve.