Well, I'm talking about one company, and its name is Green Plains (GPRE 1.38%). This Nebraska-based ethanol producer is indeed trading at about two-thirds of its book value, but it has also had all of the other problems I mentioned. Let's look a little closer to see if the company is worth a closer look. 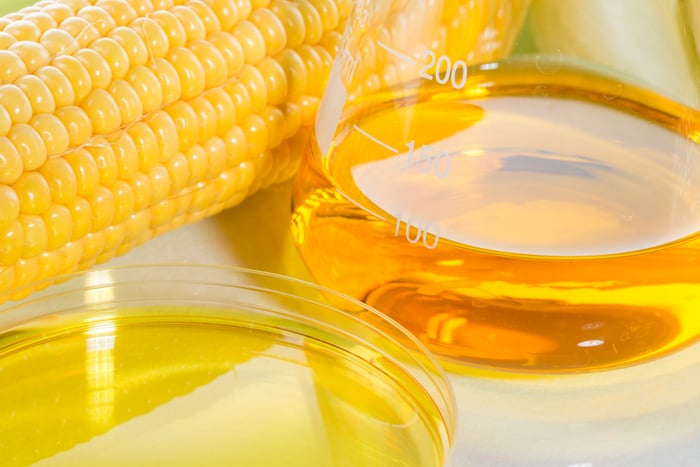 Tough times in the heartland

Green Plains is primarily an ethanol distiller. It operates 13 ethanol plants across the Midwest. But since ethanol is a corn derivative, the company has some side businesses that also revolve around corn: grain storage, operating cattle feedlots, and selling the corn oil that's a byproduct of ethanol distillation. It also derives income from its master limited partnership (MLP) Green Plains Partners (GPP 0.04%), which operates ethanol terminals and storage facilities.

In the first two quarters of 2019, Green Plains seemed to be flailing around, looking for a solution to a problem that was largely outside of its control. Its 2018 strategic shift didn't seem to have had any impact. Management tried curtailing production to save money, but that only resulted in more losses. It suspended its dividend to free up cash, but then it made the unorthodox decision to deploy that cash to buy back shares as opposed to making promised plant upgrades and "Project 24" operational efficiency improvements. Shares were down 43.2% for the year as of August.

In the second half of 2019, though, the market changed its tune on the company, in particular after an upbeat Q3 earnings report on November 6. The company's Q3 numbers were absolutely terrible -- with it reporting its biggest-ever quarterly net loss and negative cash flow to boot -- but CEO Todd Becker seemed to feel the worst was in the rearview mirror.

Ethanol prices, which had been trading below $1.35 per gallon during much of Q3, had recovered to the $1.45 per gallon range, which would mean a positive margin for the company. Becker noted that overall U.S. ethanol production had dropped, but that Green Plains' production had increased. The company completed its Project 24 upgrades -- so named because management claims they will eventually reduce operating costs to $0.24/gallon -- at one of its 13 plants and is now adding it to three others, with a goal of completion by April 2020.

The company also used proceeds from additional asset sales to reduce its long-term debt load by 40%, and it announced the further $29 million sale of its share of a fuel terminal joint venture. Finally, he noted with satisfaction that a U.S.-China trade deal was "close to resolution" and that an ethanol deal with China "could add substantial demand to the U.S. ethanol industry, and we believe it will be on the list."

There were some items in the report that may have raised eyebrows, like an additional $100 million share repurchase authorization, but overall, things seemed to be looking up for Green Plains, and the market reacted accordingly, sending shares upward.

That Green Plains' balance sheet is better off after reducing its debt is indisputable. Unfortunately, the improvements Becker noted in November proved fleeting. Per-gallon ethanol prices dropped below $1.40 per gallon in early December and haven't risen above that price since. U.S. ethanol production, which dipped in October, has also recovered to near-record levels. Details of the purported U.S.-China trade deal still haven't emerged.

Green Plains' management has made some stumbles in the past, but they deserve some credit for the progress they've made on the balance sheet and efficiency improvements. However, the big problem for the company -- and the U.S. ethanol market in general -- is low prices caused by oversupply. And there's not much any single ethanol company can do about that.

It's possible that Green Plains will be able to do what many oil companies did in the wake of the oil price downturn of 2014: cut costs and improve efficiency to the point that it can generate decent margins, even in a low-price environment. However, all we have now is management's assurance that the Project 24 efficiency improvements will come to fruition...eventually. In the meantime, the company is losing money, selling assets, and keeping its dividend suspended.

Unless something changes -- like a firm commitment from China to buy lots of U.S. ethanol -- investors should probably steer clear of this troubled industry altogether.