The stock market posted solid gains on Wednesday morning, as market participants looked forward to the scheduled signing of a preliminary agreement between the U.S. and China on certain trade issues. Trade has hung over the market for more than a year now, but signs of progress have investors excited about the future. As of 11 a.m. EST, the Dow Jones Industrial Average (DJINDICES:^DJI) climbed 160 points to 29,099. The S&P 500 (SNPINDEX:^GSPC) gained 13 points to 3,297, and the Nasdaq Composite (NASDAQINDEX:^IXIC) rose 43 points to 9,294.

Earnings season continued to pick up momentum, and reports from a couple of companies from different sectors of the economy gave investors some insight. Target (NYSE:TGT) wasn't able to satisfy investors with its initial reading on how the holiday season went. For Bank of America (NYSE:BAC), mixed performance left some shareholders disappointed as they try to assess how difficult it'll be for the banking giant to overcome the low-interest-rate environment set in place by the Federal Reserve.

The holidays didn't hit the Target

Shares of Target were down 7% after the department-store retailer reported its holiday sales results. Investors had gone into the holiday season with big hopes for a strong performance, but the numbers weren't quite good enough to meet those high expectations. 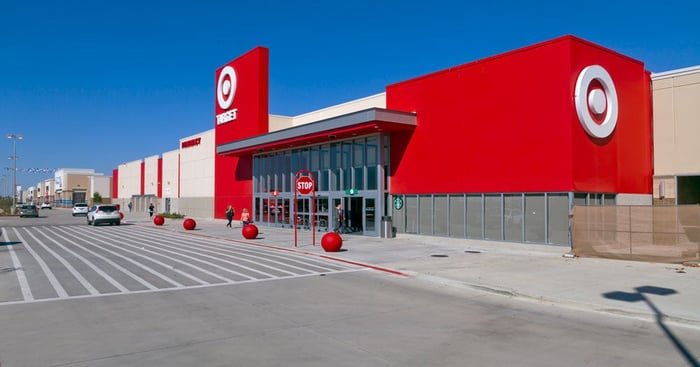 Target said that comparable sales for November and December were up 1.4% from year-ago levels. That was below the company's expectations and well below the 5.7% growth in comps that Target achieved in the same period during 2018.

Performance across categories showed big disparities. On the strong side, beauty, apparel, and the food and beverage segment all saw significant gains in comps compared to year-ago levels. However, electronics took a big hit, seeing comps fall 6%. The key toys segment was flat year over year, and sales of home-related goods were down slightly over the period, as well.

Investors seemed to ignore the more positive news that Target would keep its earnings guidance unchanged. CEO Brian Cornell explained that the weakness came from relatively low-margin business, boosting overall margin levels and supporting the bottom line. Yet despite Cornell's confidence in Target's future in 2020, shareholders simply weren't able to get behind the CEO today.

A mixed boat for BofA

Shares of Bank of America were down 2% following the release of its fourth-quarter financial report. Investors seemed to focus mostly on the impact of lower interest rates on the consumer segment, even though the bank also saw some of its other businesses bounce back from past challenges.

On the positive side, BofA was able to produce year-over-year growth in earnings per share, with buybacks reducing the share count more than enough to offset falling net income. Total revenue was also slightly better than expected. Strong trading performance in the fixed-income arena helped boost BofA's global-markets segment, as well.

BofA isn't alone among banking stocks in having to navigate tough conditions brought about by the Fed's abrupt shift in monetary policy last year. Yet if the central bank's moves help to support the overall economy, it could prove to be a net positive for Bank of America in the long run.