Dunkin' Brands (NASDAQ:DNKN) brewed up a flavorful serving of profits in 2019 with its new beverage-led strategic blueprint, and there are promising signs that the momentum is just beginning. The company is eyeing strong franchise expansion in the western U.S., complemented by its trendy experiments with oat milk and meat substitutes. The strategy isn't without its perils, however, with competition from rivals like Starbucks (NASDAQ:SBUX) and the generally risky environment of the food and beverage market.

Westward the course of donuts takes it way

Operating in the uncertain, cutthroat, rapidly shifting food and beverage sector, Dunkin' has nevertheless made good progress with its rebranding efforts. Initiated in 2017, the sweeping changes include a beverage-forward approach, with premium espresso and other hot and cold drinks as the new Dunkin' focus in place of donuts, simplified menus, mobile ordering, and new, high-tech store designs and features. The company also began home deliveries via its Dunkin' Delivery in partnership with Grubhub in June 2019. 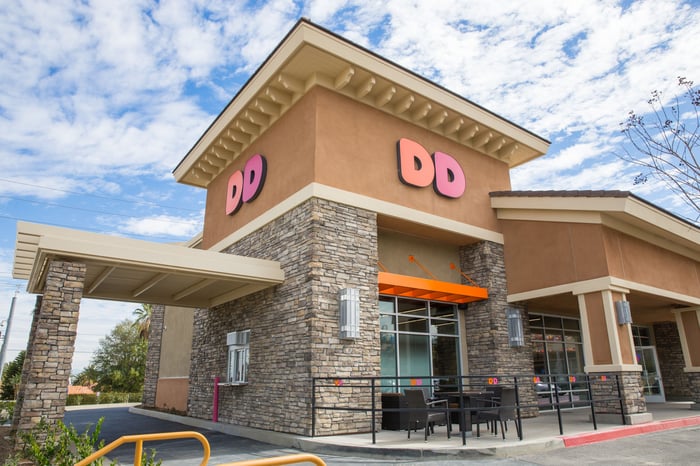 Various signs suggest Dunkin's stock may be undervalued. It began 2019 with an approximate $69 stock price and ended it at roughly $77, a modest overall gain considering several factors. Its operating margin, at approximately 31%, shows that Dunkin' is running with far greater efficiency than Starbucks' 15% operating margin. Its coffee sales, which now make up 10% of its total receipts, grew 40% year-over-year as of Q3 2019. Dunkin' also consistently outperformed the earnings projections of noted investment research sources, providing positive surprises of 4.88% to 11.11% over EPS estimates during 2019.

Just as crucial is the company's plan to move into a largely untapped market: the western United States. According to Dunkin' Brands' Q3 2019 Investor Presentation, out of 9,419 stores in the U.S., approximately 93% are in the Northeast and East market regions, with only roughly 7% located west of the Mississippi. Those living in what Dunkin' calls its western region, however, account for around 43% of the country's population.

Dunkin' plans to open 250 more franchises in the U.S. during 2020 and 2021, with 90% located in the west.  A similar percentage of new openings will likely occur in the western region over the coming years, eventually adding thousands of new stores. These stores will tap into a major pool of unrealized demand while avoiding the risk of competing with Dunkin' Brand's own well-established eastern franchises. Approximately 750 locations will open internationally during the same time frame.

Dunkin' also seems to be seizing the opportunities offered by trendy vegetarian and/or environmentally friendly ingredients with both hands. In Nov. 2019, it launched "Beyond Sausage Sandwiches" at 9,000 of its U.S. locations, using plant-based patties from Beyond Meat for a new breakfast sandwich offering. By going all-in, the company might end up stealing a march on competitors like Burger King, currently testing similar menu items at a mere 139 restaurants.

Slugging it out with Starbucks on another fashionable food front, Dunkin' also revealed last week that it's planning to offer oat milk as an option for all its beverages, both hot and cold, starting this spring. University of California studies show that oat milk, in addition to being vegan, is more eco-friendly than even the much-touted almond milk. Both of these vegetarian, health-conscious, environmentally friendly ingredients should appeal to modish customers from the Golden State to Seattle to the contemporary set in big Colorado cities.

One significant factor that could potentially prove a fly in the Dunkin' latte is if the new chief marketing officer it's currently seeking -- to replace Tony Weisman, who quit in Dec. 2019 -- reverses the company's marketing strategy. Given Dunkin Brand's stock value gains over the past year while pursuing Weisman's plan, such a sudden shift seems highly unlikely regardless of who is hired.

Dunkin's increased expansion into the western half of America, combined with its new healthy-ingredient menu choices, makes the restaurant stock a good buy right now. Some analysts forecast a 2020 Dunkin' target price of $90, a significant jump from the approximate current value of $78. Such a price is probably achievable and, even if Dunkin' doesn't reach quite that level of success, it still seems very likely to brew up piping hot, fresh, savory gains for investors.