Shares of Concrete Pumping Holdings (NASDAQ:BBCP) fell more than 10% on Wednesday after the construction materials supplier reported quarterly results that fell short of expectations. Management said the issues were temporary but that they did cast some doubt on the outlook for the company's international operations.

Concrete Pumping after markets closed Tuesday reported a breakeven fourth quarter on revenue of $84 million, falling short of analyst expectations for a profit of $0.04 per share on $84.39 million in sales. Revenue was up nearly 25% year over year, and adjusted EBITDA was up 33%, but investors were disappointed in the earnings number. 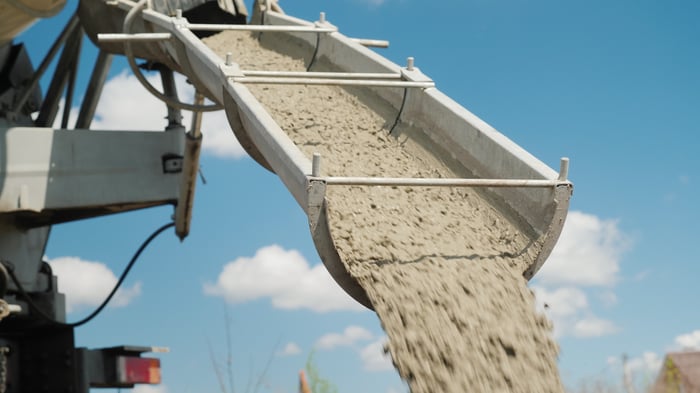 CEO Bruce Young in a statement noted that about 40% of U.S. operations were shut down in the final week of the quarter due to a winter storm, estimating that the shutdown caused a negative revenue impact of about $1.5 million. That revenue was only delayed, and Concrete Pumping expects to book it in the current quarter.

Revenue increased by 35% in the U.S., but the company's United Kingdom operation reported quarterly sales of $13 million, down from $13.7 million a year ago due to the strong U.S. dollar. Excluding the impact of foreign exchange rates, revenue was up 2% year-over-year. Adjusted EBITDA in the U.K. fell 6% for the full year, primarily due to high fuel prices and the strong dollar.

Young said that while the company remains cautious about the U.K. heading into 2020, "we expect U.S. construction activity to remain robust, particularly in our commercial and infrastructure projects, which accounted for nearly 70% of our total revenue in fiscal 2019."

The company also expects to be able to increase margins as it integrates its May 2019 acquisition of Capital Pumping.

The U.K. is a problem that isn't going to go away overnight, and Concrete Pumping could run into problems domestically should the U.S. economy fall into a recession that puts the brakes on construction projects. But a U.S. slowdown seems unlikely in the near term. And absent a slowdown, Concrete Pumping appears well positioned to quickly make amends for its poor fourth-quarter results.