A decade ago, software-defined networking wasn't much more than an idea.

Traditional networking and data center hardware names such as Cisco (NASDAQ:CSCO) and the company that would eventually turn into Hewlett Packard Enterprise (NYSE:HPE) acknowledged that software played a small role in the arena, but they didn't believe it would ever displace pre-programmed hardware as the backbone of such technologies.

What a difference just a few years can make. Cisco has finally, although somewhat begrudgingly, unveiled networking tech that allows network operators the flexibility of choosing their own software, while HPE has made software-defined networking a key part of its unique hybrid cloud solution that melds public and private networks.

And it's happened just in time. While the software-defined data center market is now worth $40 billion per year, the latest estimate from Global Market Insights suggests it will be worth a whopping $235 billion by 2026. That's nearly a sixfold increase in just six years and translates into a compound annual growth pace in excess of 30%.

Of all the ways to plug into the movement, though, familiar names such as Hewlett Packard Enterprise and Cisco may not be it. Rather, a somewhat off-the-radar company called VMware (NYSE:VMW) could prove to be the top pick in this rapidly growing space.

The term "software-defined data centers" is something of a broad, catch-all categorization, encompassing the infrastructure behind everything from cloud computing to the Internet of Things to the giant server farms needed to make artificial intelligence calculations.

They used to be powered by dedicated components and interconnected by physical switches and routers. Increasingly, though, device-agnostic software can do the job as well as, if not better than, hardware.

This approach also allows for greater interchangeability. Hardware developed from the ground up to perform a specific job within a network often works only with a narrow range of compatible components. But software can program and reprogram these components -- remotely -- for compatibility with a wide range of hardware. As such, these systems are often cheaper to build, and cheaper to manage.

Companies that own and operate such centralized communication sites haven't always believed it was possible, and the ones that did were still slow to adopt the idea. Aside from being an expensive switch and disruptive to operations, data center owners weren't convinced they'd be able to support such systems into the future. The Global Market Insights growth outlook says all of those concerns have adequately abated.

Don't misread the message: Hewlett Packard Enterprise and Cisco are both still formidable names that will capture much of the expected growth. They're both latecomers to the party, though.

VMware was one of the names that put the software-defined networking movement into motion, developing such software even before its 2012 acquisition of Nicira -- a $1.26 billion bet on a company in the software-defined networking space that didn't have any customers at the time. VMware effectively leveraged Nicira and subsequent dealmaking, and further internal developments, to maintain that lead in the meantime.

And it continues to raise the bar. For instance, late last year the company unveiled its NSX load balancer, helping network operators better distribute the data burdens that might otherwise cripple their systems if not parsed out evenly.

This platform can accommodate tens of thousands of simultaneous user connections just through the use of software. It's a powerful solution, as it negates the need for hardware that would be capable of constantly serving all of those connections, whether or not they're being actually utilized at the time. Ergo, it's cheaper to put in place, and far cheaper to manage, than a hardware-centric solution would be.

At the time of its launch, there was nothing else like the VeloCloud solution available to network operators.

To the average investor or layperson, the explanation of the technology will probably mean little. This will mean something, though: VMware was given Gartner's highest accolade among 2019's WAN Edge Infrastructure companies.

That is to say, no company, including HPE and Cisco, was rated higher in terms of VMware's vision of edge networking solutions, nor in terms of its ability to deliver that vision to end users. VMware also scored very highly among Gartner's look at hyper-converged infrastructure companies, and it scored exceedingly high in Gartner's 2019 review of unified endpoint management tools. Clearly, it's doing something right.

Gartner's annual ratings often need to be taken with a grain of salt. The scores are based on customers' experiences rather than investors' opportunities. It's not unheard of for a company that habitually loses money to rank highly with Gartner's judging framework.

That's not the case with VMware, though. In fact, VMware's consistent profitability underscores the strength of its position within the software-defined networking market.

Ditto for its consistent growth, with more double-digit growth expected this year, and next. There's a reason it's so reliable and strong. 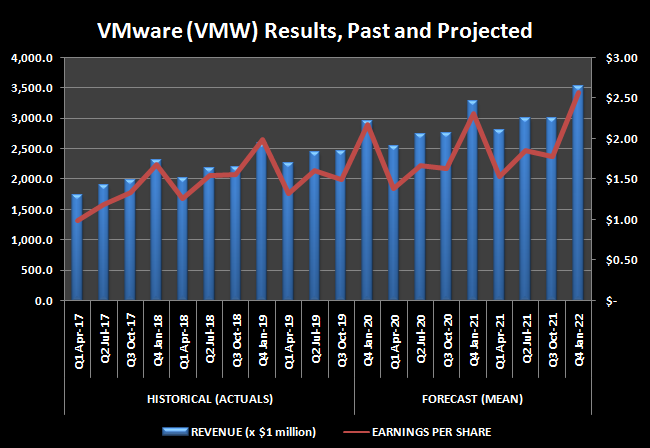 With the software-defined era of data centers just around the corner, however, investors may be underestimating what lies ahead for this rarely considered technology name that doesn't have many directly competing peers.