No restaurant business has been more successful than Starbucks (NASDAQ:SBUX) over the last generation.

Under the guidance of former CEO Howard Schultz, Starbucks went from a handful of sleepy stores in Seattle to a global coffee empire with more than 30,000 locations, as well as products that fill the aisles of supermarkets and convenience stores and a robust licensing business.

Starbucks' massive returns alone make it a compelling investing story, but there are two other reasons why investors may want to study its history. First, it happened in front of all of us. Starbucks has long been mocked for being ubiquitous, but almost any American could see that the company was growing like a (caffeinated) weed throughout the 1990s and 2000s. As famed investor Peter Lynch often advised, Starbucks is the classic "buy-what-you-know" stock.

Second, Schultz took a simple idea and turned it into a $100 billion company. On a trip to Italy, he was inspired by Italian cafes and sought to bring the experience and "theater" of espresso cafes back to the U.S., creating a "third place" away from home and work where customers could relax and feel welcome.

Let's take a look at Starbucks' history and see how much you'd have today if you'd bought into the IPO. 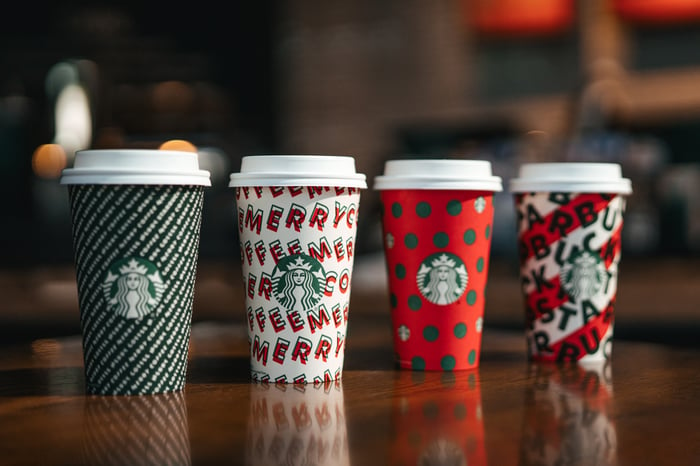 A brief history of Starbucks stock

The coffee chain debuted on the market at $17 a share, or $0.34 split-adjusted, on June 26, 1992. At the time, the company had just 165 locations,  but the stock would gain quickly through the 1990s as the company first expanded overseas in Japan in 1996. Schultz stepped down from the CEO role in 2000, and several years later the brand began to deteriorate and performance worsened. Starbucks individual stores began to feel too generic; the brand had become watered down, and the stock fell sharply from 2006 to 2009.

Schultz returned in 2008, closing hundreds of stores, and worked to bring Starbucks' old atmosphere back. The strategy worked, and the company and its stock continued to grow through the 2010s, expanding into China as its next big frontier, and tapping into digital ordering and its rewards program to drive growth in the U.S. In 2017 Kevin Johnson, former CEO of Juniper Networks, took over as CEO, bringing a tech background to the leadership post.

If you had invested $1,000 in the company's IPO, you would have been able to purchase 59 shares. Starbucks today is trading around $90 a share, so much of the share appreciation has come from stock splits. The chart below shows each stock split and how many shares you would have after it.

Just seven splits over the course of Starbucks' history would be enough to multiply your share total by a count of 64. With 3,766 shares worth $90.99 each as of Tuesday's closing you would be sitting on $342,668 worth of Starbucks stock today.

However, there's more to the equation, as we must factor in Starbucks' dividends. As investors know, Starbucks has been a committed dividend payer since 2010, raising its quarterly payout ever year by at least 14%.

Since paying its first dividend 10 years ago, Starbucks has quickly ramped up its payouts. The chart below shows how the company has raised its split-adjusted dividend over the last decade.

Starbucks has been one of the best dividend growth stocks over the last decade. Its payout has risen by more than eight times during that period, putting the company on track to become a Dividend Aristocrat if this pattern continues. Today, Starbucks offers a dividend yield of 1.8%, about equal to that of the S&P 500. Since Starbucks started paying a dividend, the IPO investor who plunked down $1,000 would have earned another $27,134, and that doesn't include reinvested dividends.

Starbucks' success is a reminder that successful investments don't have to be complicated. The cafe brand has delivered huge returns by taking an age-old concept and turning it into a modern restaurant chain.

The good news is Starbucks' growth isn't over. The company continues to expand, especially in China, and is leveraging delivery and digital ordering and adding new menu items to bring in new customers. That's one reason why Starbucks looks poised to continue to outperform the market over the next decade.