Please ensure Javascript is enabled for purposes of website accessibility
Log In Help Join The Motley Fool
Free Article Join Over 1 Million Premium Members And Get More In-Depth Stock Guidance and Research
By Jon Quast - Jan 17, 2020 at 9:13AM

It's true that the company expects revenue to fall next quarter, but the situation was never this good last time.

For patient buy-and-hold investors in Micron Technology (MU 0.35%), the worst is almost over. That's the key takeaway from the company's fiscal 2020 first-quarter earnings report. Micron operates in the semiconductor industry and is a leading producer of both dynamic random access memory (DRAM) and NAND memory products. Yet this industry is cyclical, and virtually all businesses in the space rise and fall depending on where we're at in the cycle.

And that's why Micron's Q1 was so big. CEO Sanjay Mehrotra said he's optimistic that the results of the second quarter of fiscal 2020, to be reported around March, will be the bottom of the semiconductor cycle for Micron. From there, investors should enjoy the next wave of innovations that will drive demand higher. 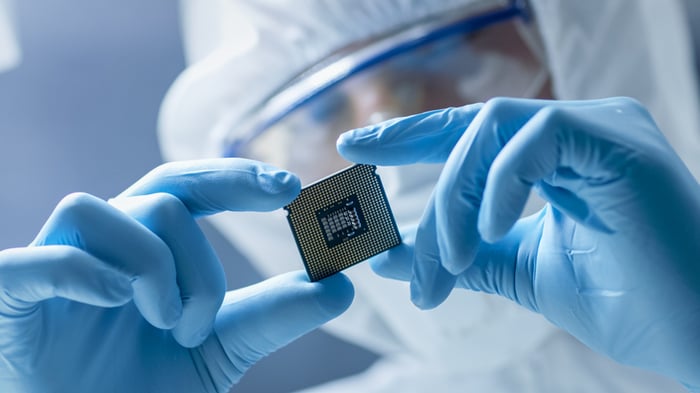 How bad is rock bottom?

Later, in the question-and-answer time, an analyst asked about free cash flow next quarter. Zinsner indicated that while it could be slightly positive or negative, it will basically be neutral.

It ain't that bad

That last nugget on free cash flow is gold. You see, the semiconductor cycle bottomed out last time in 2016. The worst quarter for Micron was the third quarter of fiscal 2016, where it reported revenue of $2.9 billion and a net loss of $215 million. And although the company had $389 million in cash from operations, it had almost $1.7 billion in capital expenditures, resulting in negative $1.3 billion in free cash flow. 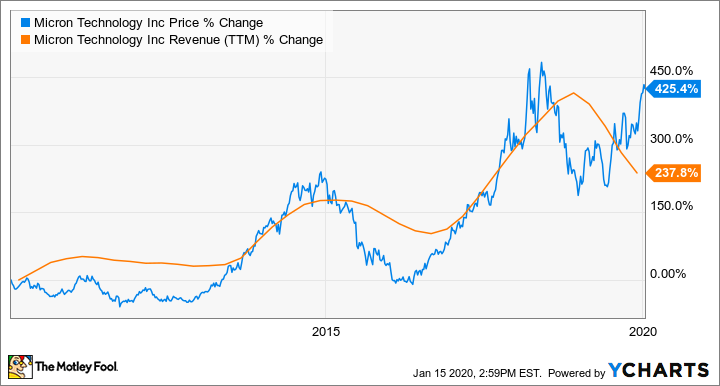 The 10-year chart above shows that Micron's stock normally moves up or down before revenue shifts, and in fact that's what we are already seeing. Shares are already up close to 100% from lows hit in late 2018. But what the chart also shows is that as semiconductor demand increases over time, each bottom of the cycle is higher than the one before.

The next bottom of the cycle for Micron (presumably Q2 2020), when compared with 2016, will have revenue 55% higher, net income instead of a net loss, and free cash flow that's neutral rather than negative. That's a huge difference between rock bottom last time and this time.

What's next in the cycle?

The world is on the brink of seeing long-hyped trends like 5G, the Internet of Things, and artificial intelligence actually begin to take shape. As you might expect, it's mostly the household-name technology stocks that get the media attention, but none of it would be possible without companies like Micron behind the scenes.

One product that may differentiate Micron is its 3D XPoint product line. This isn't DRAM or NAND memory, but rather something in between the two. It was developed in cooperation with Intel (NASDAQ: INTC), and subsequently acquired outright by Micron (sorry, Intel). The company says 3D XPoint is fast like DRAM memory but more reliable like NAND, which could make it particularly useful in data centers.

As vast amounts of data are created, there's an ever increasing need for data storage. Many companies are spending more on infrastructure to meet that demand. If 3D XPoint can grab a significant slice of a growing pie, that would be a huge boost to the business.

It's true that an improving semiconductor industry benefits many players, not just Micron. So I don't want to rule out other companies as potential investments, but Micron should definitely be on your list. The stock trades at only 10 times forward earnings. While semiconductor companies don't typically get rich valuations, Micron's is among the cheapest in the industry.

Finally, the company targets returning 50% of free cash flow to investors via share repurchases. During the last semiconductor up cycle, Micron generated between $1 billion and $2 billion of quarterly free cash flow. If this next semiconductor cycle turns out to be stronger than the last, shareholders could see the company buy back over $1 billion in shares quarterly. Considering that Micron's market capitalization is around $60 billion, this would fuel dramatic EPS growth.