Please ensure Javascript is enabled for purposes of website accessibility
Log In Help Join The Motley Fool
Free Article Join Over 1 Million Premium Members And Get More In-Depth Stock Guidance and Research
By David Haen - Jan 23, 2020 at 9:31AM

One just wrapped up a multi-billion-dollar acquisition while the other elected to remain independent.

Shares of both Exact Sciences (EXAS -3.33%) and Qiagen (QGEN 0.48%) have undergone a rocky ride over the past few months. What caused this? For Qiagen, the stock dropped below $30 in October following the discontinuation of a key business line, slower-than-expected growth in China, and the retirement of its longtime CEO. Its stock bolted north of $40 in December on news of a potential buyer before retreating to the low $30 range after the company elected to remain independent. If you take out the rumor-fueled bump, the stock appears to be steadily gaining traction since its lows in the fall.

Exact Sciences, which reached a 52-week high of more than $120 per share in September, then began trading downward despite good news of an expanded approval for its cancer diagnostic test. Without a definitive trigger, one can only speculate what drove the sell-off. Profit-taking following nearly a 150% gain in the prior 18 months may have been partly to blame. The stock bottomed out in the high $70s in November before recovering above $100 in January after completing its acquisition of Genomic Health. In recent days, the stock has tapered off below $90. 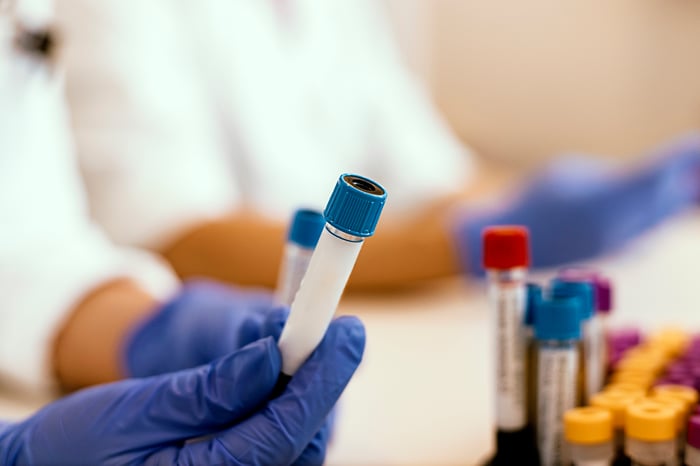 Exact provided estimated 2019 revenues between $874.5 million to $876.5 million, which included $65 million to $66 million in sales from Nov. 4 until year-end attributable to the acquisition of Genomic Health. Cologuard, Exact's non-invasive colon cancer diagnostic test, saw its use increase by 80% last year to 1.68 million tests. Investors were not impressed with the numbers and drove the stock down.

2020 will be a year of execution at Exact. First, it needs to integrate the Genomic Health acquisition. Second, it needs to continue to increase its market share for Cologuard. Previously, management indicated a goal of reaching 40% penetration of the market, up from the 5% it claimed on its third-quarter conference call. Third, it needs to successfully gain Food and Drug Administration approval of its blood-based test for hepatocellular carcinoma (HCC), the most common form of liver cancer. Exact believes 3 million Americans could be users of the HCC test. The FDA granted "Breakthrough Device Designation" to the diagnostic, and Exact expects it to be commercially available in the second half of 2020. Lastly, Exact's management needs to deliver on its guidance for $1.6 billion in revenue this year, with $1.2 billion in gross profit.

If Exact achieves the aforementioned items, the stock should appreciate commensurately. Today's market cap of $12.8 billion and approximately $875 million in revenues yields a price-to-sales ratio of about roughly 14.6. If Exact hits its 2020 estimates of $1.6 billion in sales, then using that same ratio produces a valuation of $23.4 billion, or around $180 per share.

Qiagen gets back to business

Qiagen investors endured a rollercoaster ride over the past few months. First, the company said Thermo Fisher offered to acquire the company, which was spurned. The board undertook a review of strategic options, including a potential sale, and determined the best path forward was to remain independent. Qiagen's longtime CEO also stepped down in the fall, adding to the speculation that the company was on the auction block. The stock rose on the news of a possible sale and later dropped when that was off the table. With those events in the rearview mirror, Qiagen needs to get back to growing its business.

Last week, Qiagen announced an exciting collaboration with biotech giant Amgen (AMGN 0.19%) to develop a companion diagnostic for one of its most promising new cancer drugs, called AMG 510. The diagnostic will analyze tumor tissue to identify cancers harboring the KRAS G12C mutation. Amgen jumped into the lead in a footrace against Mirati Therapeutics and others to develop a new class of cancer therapies aimed at the mutation, which is found in 13% of non-small cell lung cancers.

While it's good news to be hitched to one of the most closely watched development programs, Amgen also forged a collaboration with Guardant Health (GH -2.28%). The Guardant pact seeks to develop a liquid biopsy method to detect the KRAS G12C mutation. This will be used when a sample of the tumor tissue is not available for analysis.

Qiagen launched its oncology molecular profiling services in Europe last week. This provides yet another avenue for the company to provide insight to best treat cancer patients. The service, aimed at oncologists, molecular pathologists, and geneticists, incorporates both European medical guidelines and a catalog of approved cancer drugs in Europe. The service interprets data for selecting an optimal treatment plan for each unique patient.

Additionally, Qiagen forged a new seven-year collaboration with existing partner LabCorp (LH -0.92%) in November. LabCorp will use Qiagen's Human Gene Mutation Database across its laboratories to help identify and interpret genetic signatures of inherited diseases. Investors will be watching to see how this collaboration and Qiagen's partnership with Illumina (ILMN 0.08%) perform. The Illumina deal, announced last October, seeks to develop new in vitro diagnostic tests.

Not too dissimilar to Exact, consensus estimates for 2020 net sales amount to $1.59 billion. It is arguably cheaper, sporting a price-to-sales ratio that's roughly half of Exact's. However, Qiagen's growth is slower. It only grew revenues by 1% in the third quarter of 2019.

Exact's growth potential outweighs the prospects of Qiagen. However, Qiagen merits revisiting once a permanent CEO is named and a clear strategy for the future is laid out.

Investing in biotech companies is inherently risky, so there's no need to add to the uncertainty. While Exact and Qiagen are more stable than many biotechs, both companies witnessed dramatic swings in their stock prices over the past few months. Investors who buy either of these stocks today should be prepared to see more volatility in the future.