Please ensure Javascript is enabled for purposes of website accessibility
Log In Help Join The Motley Fool
Free Article Join Over 1 Million Premium Members And Get More In-Depth Stock Guidance and Research
By Daniel Foelber - Jan 23, 2020 at 6:43AM

A look at what’s next for Alaska Air.

With dominant Pacific Northwest exposure and a smiling Eskimo on the tail of its planes, what's not to love about the Alaska Air Group (ALK -4.84%)? Alaska Air (Alaska) was the best-performing major airline of the 2010s, rising more than three times the S&P 500. With the new decade upon us and earnings coming on Jan. 23, could Alaska continue soaring in the years ahead? 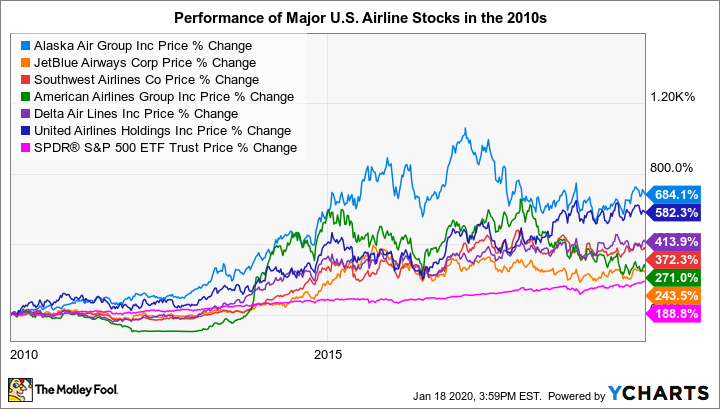 Alaska airlines exclusively covers routes in North America and Central America. The company has an entrenched presence in Alaska and the northwest United States, an attractive position for investors looking to invest in an airline with loyal customers and growing tourism. 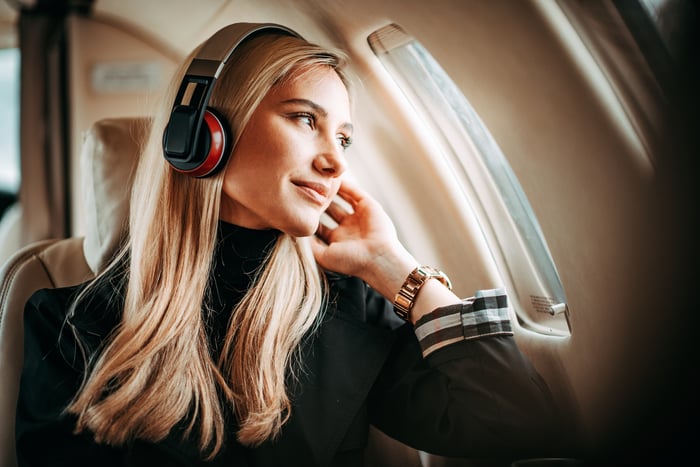 In 2016, Alaska bulked up its West Coast coverage with its acquisition of Virgin America, hoping to increase business in California, a state led by Southwest Airlines (LUV -3.80%) and United Airlines (UAL -7.13%). After a rocky introduction of routes in 2017, Alaska announced plans in August 2019 to connect California routes to the Pacific Northwest starting in January 2020. As the airline that offers "more flights to more destinations from the West Coast than any other airline," Alaska is staging in its California expansion by leveraging its existing strength further up north the coast.

For those curious about Alaska Air's exposure to the recent Boeing (BA -3.76%) 737 MAX scandal, the company doesn't have any of those planes in its fleet of 166 Boeing 737 aircraft, 72 Airbus A320 family aircraft, 34 Bombardier Q400 aircraft, and 60 Embraer 175 aircraft. This lack of exposure will limit Alaska's susceptibility to the hundreds of millions of dollars of lost earnings rivals like Southwest Airlines, United Airlines, and American Airlines (AAL -7.46%) are experiencing due to the ongoing groundings of Boeing's scandalous new line.

Overall, Alaska Air makes up for its lack of international exposure with the moat it has created. The company invests in opportunities in its wheelhouse, expanding only to where it can gain a competitive edge. Although the surge in international air travel is attractive, and one of the driving tailwinds fueling growth in the airline industry, Alaska shareholders certainly aren't missing out given the growth Alaska has been able to generate. 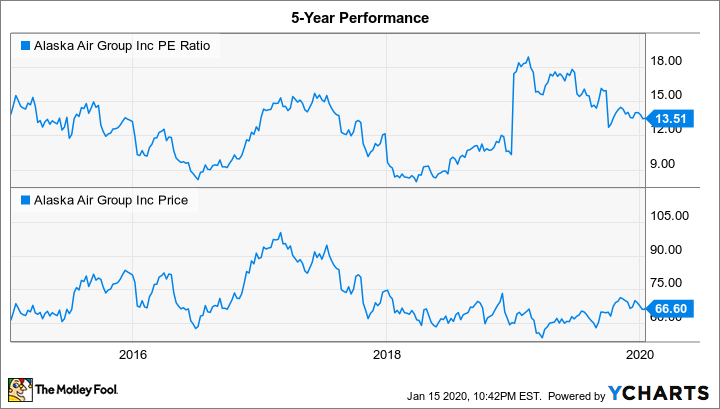 In the third quarter of 2019, Alaska was able to grow net income a whopping 48% year over year, far surpassing even Delta Air Lines's 29% or United's 31% over the same period. Due to such solid earnings growth, Alaska now finds its earnings outpacing the growth in its stock price which could mean that there is a general consensus that Alaska's growth can't continue. If it does, that would usher Alaska into value stock territory.

Alaska's cash flow is also strong, which is helping the company continue to increase its dividend. Alaska paid a $0.35-per-share dividend in the third quarter of 2019, which was 9% more than the same dividend a year prior. In the past five years, Alaska's dividend has grown 75% and free cash flow has grown 55%. The stock now yields over 2%, garnering dividend stock status. 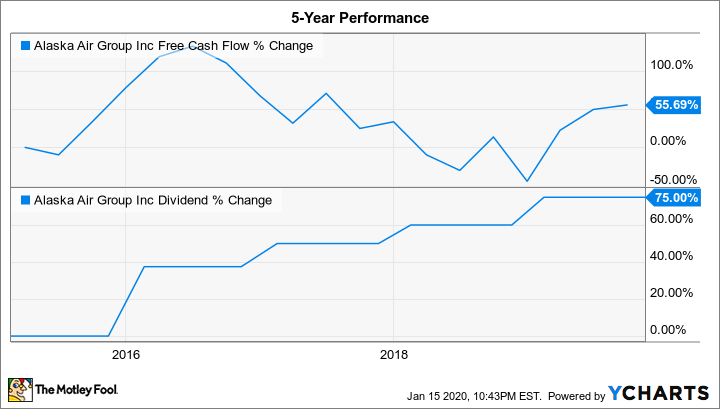 Revenue per available seat mile (RASM) is one of the most important metrics to watch when evaluating an airline stock because it provides a useful way to evaluate the same airline over time as well as compare that airliner against its competitors.  The general consensus among the major U.S. airlines is that RASM, and earnings growth along with it, will decline in 2020. To Alaska's credit, the company is guiding for 1% to 4% RASM growth compared to Q4 2018. Yet even with "much harder comps,"  this guidance looks much better in the face of American Airlines trimmingtheir Q4 RASM guidance to 0% to 1% growth in what could be the end to the company's 12-quarter RASM growth streak.

For Q4 2019, income investors should be on the lookout for any signs of Alaska continuing to grow its dividend. While the company will face some difficult comparisons after a blowout third quarter 2019, not to mention a banner decade, if Alaska is able to grow RASM as it expects, that could mean continued outperformance relative to its peers. Another thing to note is just how successful Alaska's California expansion will be in 2020, so be on the lookout for the company's guidance in that regard.