Please ensure Javascript is enabled for purposes of website accessibility
Log In Help Join The Motley Fool
Free Article Join Over 1 Million Premium Members And Get More In-Depth Stock Guidance and Research
By Lee Samaha - Jan 24, 2020 at 7:34AM

The first half of 2020 will be difficult for the paintings and coatings industry, but that shouldn't phase long-term investors.

The case for buying stock in paintings and coatings company PPG Industries (PPG 0.24%) is definitely not based on the idea that its end markets are firing on all cylinders right now. However, on a risk/reward basis, the stock actually looks like a good value. Let's take a look at what's going on with the Dividend Aristocrat, and why it's an attractive stock for long-term investors.

Last year wasn't a great one for the industrial sector, and as you can see below sales actually declined for PPG on a reported basis. What's more, management's guidance for 2020 calls for sales growth of 1%-3% (including acquisitions, which should be responsible for 1% growth), so it's fair to say 2020 will be another year of anemic growth.

A quick look at PPG's end markets by use shows the nature of the problem in the last couple of years, and helps explain what's going on. Simply put, the slowdown in the industrial sector and automotive original equipment manufacturing (OEM) hit PPG's industrial coating segment (with volume down 6% in 2019), and economic weakness in Europe hit its performance coatings segment (with volume down 1% in 2019).

In fact, overall volume declined 3.1% in 2019, and only a 2.3% contribution from price increases and 2% from acquisitions kept revenue growth positive at 1.2% in 2019. In case you are wondering, adverse currency movements led to the drop in revenue you can see in the table above. 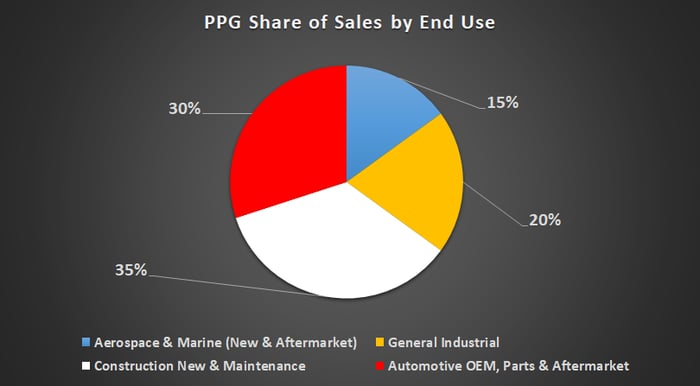 If the headline performance in 2019 was lackluster, then management's guidance for 1%-3% sales growth in 2020 is similarly so. Moreover, speaking on the earnings call, CFO Vincent Morales said that automotive production is likely to remain weak in 2020, while the production halt on the Boeing 737 MAX led to "updated first half 2020 Aerospace OEM production forecasts which have tilted lower."

Putting it all together, it's set to be a year of low revenue growth, with "stubbornly" high raw material costs and downside potential from further weakness in the industrial economy. That said, PPG might be a stock worth buying. 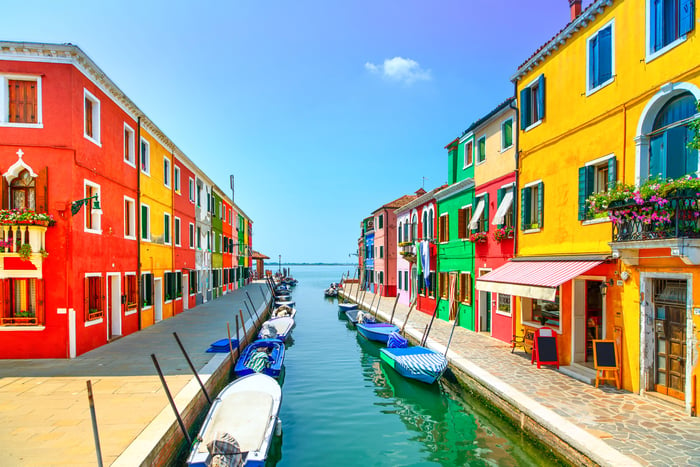 The case for buying the stock rests on three main arguments. First, during the slowdown, management has taken actions to reduce costs and improve profitability. In fact, as the table above shows, segment margin expanded from 13.8% to 15% in 2019, and CEO Michael McGarry argued that, "if you start to put any volume on the bottom line, you should expect to see the industrial segment margins significantly improve."

Second, the paintings and coatings industry remains an industry in consolidation, and underlying margin and return on equity trends appear to be on the upswing. In the last decade, PPG bought the North America architectural coatings business of Akzo Nobel (AKZOY 0.75%) and Mexico's Comex, while Sherwin-Williams (SHW -1.77%) bought Valspar in 2017.

Simply put, PPG, Sherwin-Williams (the two largest players in the industry) and peers are very good at generating income from their assets. In the long term, this means they have the potential to grow dividends handsomely -- PPG and Sherwin-Williams are both Dividend Aristocrats, having raised dividends for more than 25 consecutive years.  Moreover, there's a reason why Warren Buffett holds Axalta Coating Systems (AXTA -0.37%). 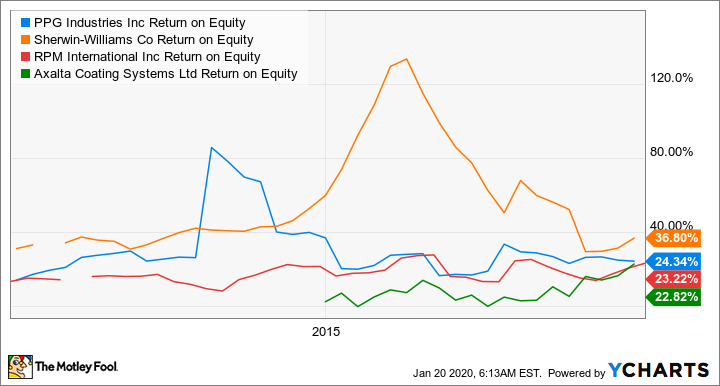 Third, PPG has significantly improved its free cash flow (FCF) generation from earnings in recent years. Based on analyst estimates, PPG looks like a good value on a free cash flow basis. To put these figures into context, a price to FCF multiple of 18 times implies PPG is generating 5.5% of its market cap in FCF. And as we've already seen, PPG is very good at generating income from its investments.

Is PPG stock a buy?

If you can close your ears to some potentially bad news from the industrial sector in the first half of 2020, then the stock is attractive. The valuation is fine, and any improvement in the economy and/or a long-overdue drop in raw material prices will give PPG the chance to grow margin and profits.

So on a risk/reward basis, there is upside potential to the stock from any recovery in the industrial economy, while the FCF generation should limit the downside. That's usually a good proposition for investors.