Please ensure Javascript is enabled for purposes of website accessibility
Log In Help Join The Motley Fool
Free Article Join Over 1 Million Premium Members And Get More In-Depth Stock Guidance and Research
By Brian Stoffel - Jan 26, 2020 at 9:33AM

Sift out the noise and focus on these three forces.

Humans like complexity.  Clever, elaborate schemes makes us believe we're accomplishing something -- even when the results don't bear that out. The vast majority of the time, painfully simple solutions are actually the best option.

Consider the question University of Michigan professor Robert Axelrod tried to answer in 1980: What's the best strategy in the prisoner's dilemma? 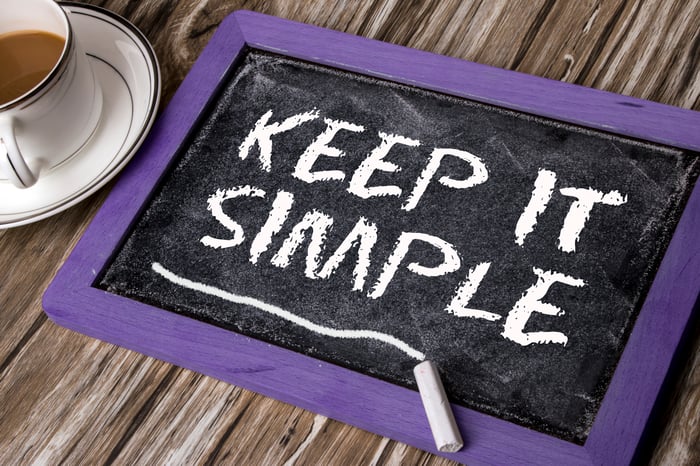 The prisoner's dilemma is a famous thought exercise.

Over the long run, what strategy works the best in such situations?

After getting various strategies from credentialed game-theorists, Axelrod ran lengthy computer simulations. The winning strategy was also the simplest: Start by cooperating, then do exactly what your partner does thereafter. This is referred to as the "tit-for-tat" (TFT) strategy.

Thousands of hours were likely spent on more clever designs, but that didn't mean they were effective. Writing about the phenomenon in his 2017 book Barking Up The Wrong Tree, author Eric Barker says:

TFT was the simplest of them all...Getting too clever muddies the waters, and the other person can quickly become very skeptical of you.

Now, in zero-sum games like chess, you want your intentions to be unclear, but in the iterated Prisoner's Dilemma, it's the exact opposite. You want the other player to see what you're doing so they can join you.

Life is more often like the latter (emphasis added).

Not only does keeping it simple force us to find the signal in the noise, it also provides advice we're far more likely to follow through on.

This is true when it comes to finances, investing, and life in general.

Helping people get out of debt and build a sustainable financial foundation is an enormous industry. That's a big part of what we do here at The Motley Fool.

You'll find a lot of suggestions about how to improve your financial life, but I've found that readers tend to get the most benefit from a pretty short list. Pareto's Principle says that 1% of your input can account for 50% of your output. In other words, if you get a list 100 personal finance rules to follow, a decade later, it's likely that just one accounted for half of the improvement in your finances, and four of them accounted for two-thirds of the improvement.

Exactly which rules will help you the most depends on you and your particular situation. But my best guess is that the most important one would be:

Live within your means.

As writer and former Fool columnist Morgan Housel is fond of saying: "When most people say they want to be a millionaire, what they really mean is 'I want to spend a million dollars,' which is literally the opposite of being a millionaire."

What would the next three be? My best guess:

If you want to stay out of trouble and rest easy at night, don't buy stuff you don't need.

When I started investing, I came up with complicated ways to measure how "expensive" a company's stock was, how its sales "should" grow, and what the price of the stock "would" be in a few years' time. Needless to say, this didn't work. Over time, my goal has been to keep the process of investing simple.

Of all the investing rules that we hear, I think one plays the biggest role:

Buy a stock (with money you don't need in the immediate future), and then forget it.

In a 2013 study, Fidelity discovered that its best investors were the ones who never touched their accounts. More often then not, they forgot about them or -- as my UK colleague Paul Summer pointed out -- they were simply dead.

As long as you don't need the money soon, just buy and hold. Sure, if you time the market you might get out before a crash -- but you're also just as likely to miss a huge upswing.

The next three rules, in my opinion, would be:

Finally, I feel compelled to point out that keeping it simple matters in the most important realm of all: our personal lives.

The single rule above all else:

Back to Housel, who in 2013 provided us with what the next three should be:

Of course, there's lots of overlap between these factors. But my guess is that by keeping it simple and focusing on these steps, you're going to appreciate the results.