Comparing any stock to a ship probably isn't the best analogy. However, I couldn't help thinking of the Titanic after seeing some of the headlines over the last couple of months about Aurora Cannabis (ACB -3.62%).

For example, in December one analyst declared a one-year price target for Aurora of... $0. That's not a typo. GLG Research's Gordon Johnson predicted that the stock could be worth nothing in the not-too-distant future.

Then other analysts came out earlier this month with price targets that would have Aurora Cannabis losing close to half of its market cap. Keep in mind that Aurora already plunged 56% last year. And if that's not enough, there are serious concerns that the company won't be able to meet its debt covenants.

Investors couldn't be blamed if they have a sinking feeling. But is Aurora Cannabis really the Titanic of marijuana stocks? 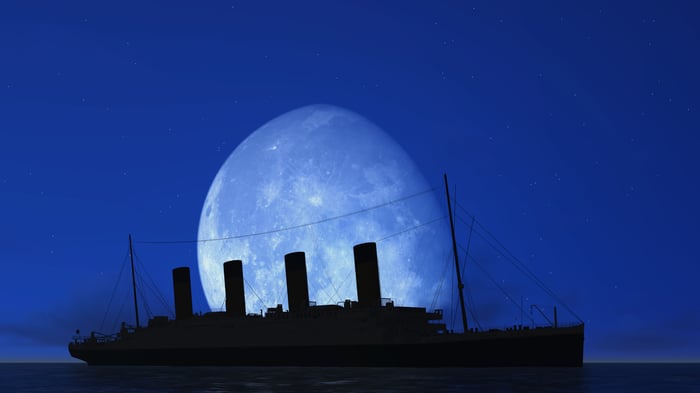 We can sum up the main knocks against Aurora Cannabis in three brief points:

All of these statements are demonstrably true.

Aurora continues to lose a lot of money. Don't be fooled by the company's positive net income of 10.7 million in Canadian dollars in its fiscal 2020 first-quarter results. That paper profit resulted from a big unrealized gain on the revaluation of Aurora's liability for its 2024 convertible senior notes. And that gain stemmed from Aurora's share price plunging during the quarter.

The company has backed away from its previous predictions of positive adjusted earnings before interest, taxes, depreciation, and amortization (EBITDA) like Hollywood celebrities at a party with Ricky Gervais. It's not clear how long it will take for Aurora to achieve positive EBITDA. And even when it does, that's still not the same thing as delivering real profitability in the form of positive net income.

Aurora's huge amount of debt doesn't help matters. The company managed to defuse its ticking time bomb of CA$230 million in convertible debentures coming due in March 2020 by cutting a deal with debenture holders to convert their debentures to stock.

However, that move meant more dilution in the value of Aurora's existing shares. Aurora is also burning through its remaining cash pretty quickly, so further dilution is almost certainly on the way. And there's CA$360 million in notes maturing in August 2021. Debt and dilution could be the equivalents of big icebergs for the company.

With all of the doom, gloom, and despair about Aurora's prospects, you might think that the stock really could soon be worthless. But there are several things to keep in mind.

Aurora's revenue will probably increase nicely in 2020. The company's biggest headwind last year was the lack of retail cannabis stores, particularly in Ontario -- the biggest potential cannabis market in Canada. Now, though, Ontario is taking steps to open up more retail stores. By March, the province expects to issue 20 new retail licenses each month. That's a significant step in the right direction for Aurora and its peers.

The company will also almost certainly enjoy greater sales as the Cannabis 2.0 cannabis derivatives market takes off. Aurora is already shipping edibles and vapes. Both product categories should present major growth opportunities for the company.

Higher sales should help Aurora move toward profitability as it reins in spending. And, yes, the company has taken serious steps to control costs, notably including freezing plans to spend CA$200 million on the construction related to expanding its production capacity.

Aurora has some serious problems and challenges. However, I think that predictions of Aurora's impending demise and the overwhelming negativity surrounding the stock add up to a titanic exaggeration of the position the company is actually in.

Will it be smooth sailing for Aurora Cannabis in 2020 and beyond? Probably not. Expect volatility for marijuana stocks, in general, for a long time to come. Aurora isn't an exception.

By the way, I'm not saying Aurora Cannabis is a great stock to buy right now. With the uncertainty and risks the company faces, it isn't. But I don't think that its share price will fall to $0. Aurora might have some worrisome leaks, but it's not a sinking ship.