Please ensure Javascript is enabled for purposes of website accessibility
Log In Help Join The Motley Fool
Free Article Join Over 1 Million Premium Members And Get More In-Depth Stock Guidance and Research
By Howard Smith - Jan 26, 2020 at 10:16AM

Cott is buying Primo Water and hopes its transition to a pure-play water company will drive margins and its valuation higher.

Cott (PRMW -1.39%) was once a leading provider of beverages including hot drinks like coffee, tea, hot chocolate, and malt drinks, as well as a manufacturer and distributor of carbonated beverages. But for the past few years, it has been moving into the purified water business. Its latest step is the recently announced purchase of Primo Water (PRMW).

Primo is the largest seller of water dispensers, the largest provider of purified bottled water for consumers, and has the largest self-service water refill business in North America. After a final sale of Cott's S&D coffee and tea business, this combination, which will be named Primo Water Corp., will be a pure-play on water purification with an international footprint. 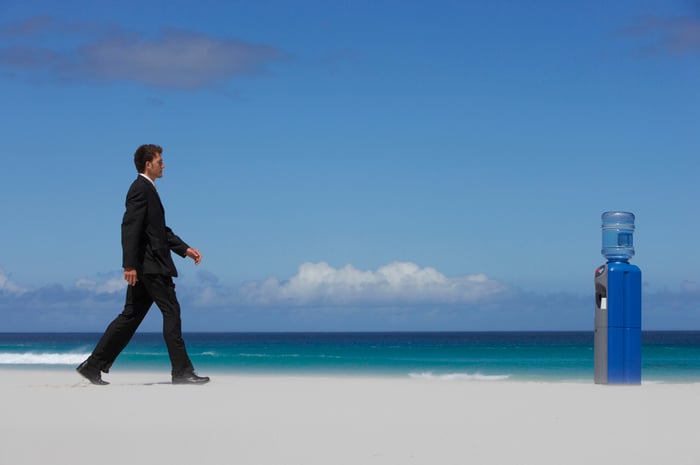 Keeping skin in the game

Cott's transformation toward a pure-play water business has been in the works for several years. Acquisitions of over $2 billion and divestitures of its legacy sugary beverage business of $1.3 billion occurred between 2014 and 2019. The chart below shows the changes in sales growth and EBITDA margin from the transition and what it expects after the Primo acquisition.

Primo management also believes that the combination should result in a higher-growth business. The transaction allows for retained ownership with stock in the combined companies, as selected by Primo management. Billy Prim, Primo's interim CEO, said: "We believe that the combination of these two companies will lead to a higher growth price than either one of them as stand-alone. And that is one of the reasons it was so important for us to get stock in this transaction ... where we believe the value of that stock of the combined companies will be in the future versus us as a stand-alone business."

The combination builds on Primo's successful razor-and-blades business model -- the dispenser sales being the razor. These can be expanded using Cott's expansive North American route-based business as well as in Europe. And this expanded base sets up the higher-margin blade portion of the business (including the exchange and refill businesses).

Exchange is where customers return their empty bottles and have them replaced with three- or five-gallon bottles of purified water at locations like major home improvement stores as well as grocery chains. Primo founder Billy Prim knows something about this since it resembles the model of another business he founded: Blue Rhino, the prolific propane-tank exchange business. Refill is similar, except customers use refill machines, which contain filtration, to fill their own containers.

The opportunities from the combination are what could set up this pure water play as a compelling buy today. Cott's home and office delivery business is spread across a 21-country footprint, including 18 European countries. Bringing Primo's razor-and-blade model to Europe with a base of new dispenser sales will lead to higher-margin exchanges and refills, in an entirely new market.

Other coordinated efforts should grow home and office delivery, along with Cott's new Internet of Things (IoT) enabled filtration system, PureFlo. Customers can use their smartphones to monitor water quality, volume, and other data points. This allows for technician visits only when needed, and not just to check on the units.

Cott management believes this combination will be accretive to sales growth, margins, and earnings. The fact that the Primo founder is taking stock in the transaction shows he is in agreement. As a singular, water-focused company, it believes a new valuation that is more aligned with pure-play peers in the water business could boost its valuation. The chart below compares Cott's 3-year price-to-sales ratio with those of several peers. 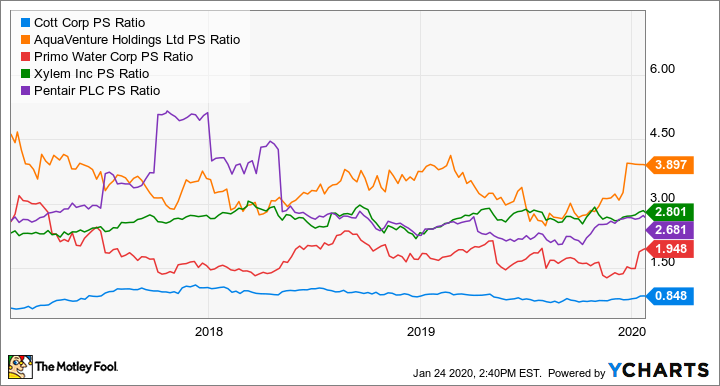 It appears that the structure is in place, and with execution, the business should look much better than the legacy Cott business. This could mean a compelling new opportunity for investors.