Please ensure Javascript is enabled for purposes of website accessibility
Log In Help Join The Motley Fool
Free Article Join Over 1 Million Premium Members And Get More In-Depth Stock Guidance and Research
By Lou Whiteman - Jan 27, 2020 at 11:57AM

Fears of a growing coronavirus outbreak from Wuhan, China, are causing a sell-off of airline and cruise shares.

Shares of American Airlines Group (AAL -1.39%) fell more than 8% on Monday morning, and shares of other travel companies, including Delta Air Lines (DAL -1.84%), Carnival (CCL -6.93%) and Royal Caribbean (RCL -5.98%), opened down more than 5%, following a weekend of scary headlines concerning the coronavirus outbreak. It is still far too early to know how dangerous this virus will ultimately prove to be, but investors have seen enough to move to the sidelines on key travel names.

The coronavirus outbreak originating in Wuhan, China, captured international attention and moved markets last week, and the news only grew more alarming over the weekend. The virus is now blamed for more than 80 deaths, and there are more than 2,700 confirmed cases on China's mainland, with more than 30,000 people under observation. 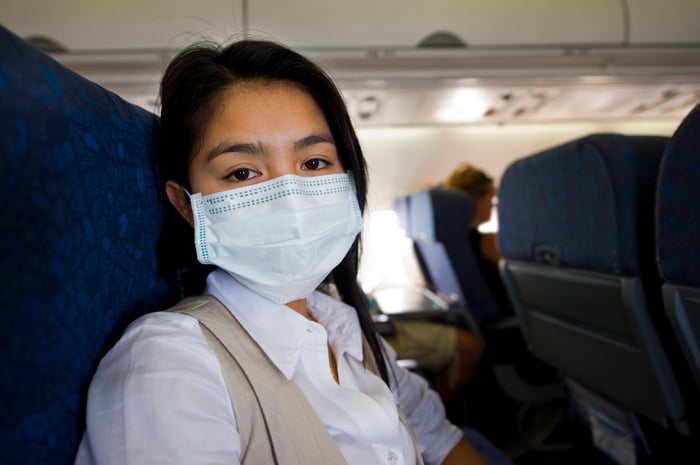 As researchers learn more about the virus, fear is growing that it has a slow incubation period, meaning it is possible people infected with the virus can spread it before they have noticeable symptoms.

The S&P 500 fell more than 1.3% at the open on Monday, in part because of concerns about the virus, and a number of travel stocks were hit particularly hard. American Airlines was the low flier among airline stocks because it is the U.S. carrier seen as most vulnerable to an unexpected drop in demand. American has the highest debt burden among major airlines. It is already facing labor unrest and is among the airlines most affected by the grounding of Boeing's 737 MAX.

American Airlines shares are now down more than 13% in the last month, and other travel stocks are not far behind. Delta has actually held up better than some, but the airline is the target of concern because it owns a stake in China Eastern Airlines and has targeted that region for growth. United Airlines Holdings (UAL -2.76%) also traded down more than 4%. 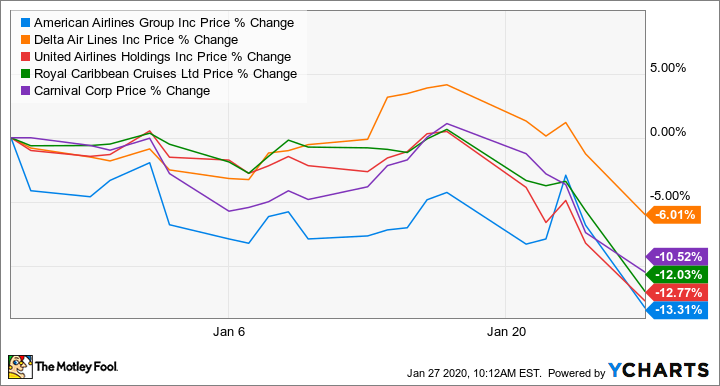 China also accounts for about 5% of global cruise capacity and tends to be the destination for some of the higher-margin trips for cruise operators such as Carnival and Royal Caribbean, with China accounting for nearly 9% of Royal Caribbean's total revenue over the past 12 months. With cruise companies canceling trips and port calls in the country, the companies are likely to at the very least take a hit to first-quarter earnings, and they could face longer-term growth challenges.

The logic behind this sell-off is solid. The coronavirus outbreak is still in its early days, and it is impossible to say how widespread the outbreak will be or how long it will last. The headlines alone are likely enough to make many business travelers and vacationers think twice about booking travel right now, and that seems likely to at least temporarily cut into demand.

For investors with a long-term outlook and the ability to handle volatility, this sell-off could create an opportunity to buy into some quality companies. But there is no reason to rush. We're likely to be reading headlines about the coronavirus for days, if not weeks or months, to come.