Please ensure Javascript is enabled for purposes of website accessibility
Log In Help Join The Motley Fool
Free Article Join Over 1 Million Premium Members And Get More In-Depth Stock Guidance and Research
By Rich Duprey - Jan 28, 2020 at 8:17AM

The possibility of reuniting the two tobacco giants seems to have been finally stubbed out.

And just like that, Philip Morris International (PM 1.80%) has slammed shut the door on a merger with Altria (MO 2.09%), a door it had propped open just days before.

In an interview with CNBC, CEO Andre Calantzopoulos said the merger conversation between the global tobacco giant and its domestic counterpart "is finished." Philip Morris has moved on, and the two companies are now focused solely on commercializing the IQOS heat-not-burn tobacco device. 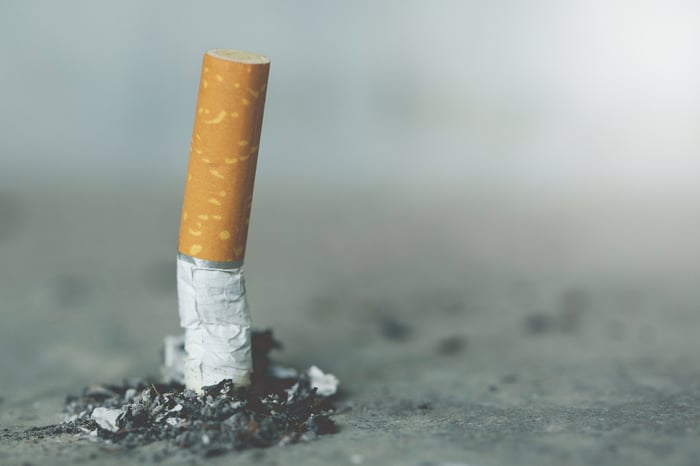 While that is similar to comments Calantzopoulos made recently, it was only a couple of days ago that Philip Morris COO Jacek Olczak seemed to hold open the possibility that that the two companies might yet join forces.

"The chapter is closed, but not the book," he said, when asked whether the cigarette company might revisit the merger. Now it appears Calantzopoulos has thrown the book onto the fire.

There are good arguments in favor of and against reuniting the two cigarette companies that separated in 2008.

Altria, of course, is the U.S.-based tobacco giant that markets its cigarette brands like Marlboro while Philip Morris has the rights to sell Marlboro and other brands in foreign countries. The two separated over a decade ago as a means of walling off the company's foreign assets from the lawsuits that have dogged the tobacco company for decades.

Yet over the years the two companies have increasingly forged closer ties, especially on the subject of reduced-risk products like the IQOS. An agreement between the two companies made several years ago gave Altria the right to market, distribute, and sell the IQOS in the U.S. under its Marlboro banner.

Last year the Food & Drug Administration (FDA) approved Philip Morris' application to sell the device in the U.S., though the tobacco company is still awaiting word on whether it can earn a reduced-risk designation. Altria has begun rolling out the IQOS into several markets.

However, the e-cig industry was thrust into turmoil by what the FDA called a rising "epidemic" of teen use of the devices, particularly those made by Juul Labs. At one point it owned around 80% of the market, though FDA agitation against the company and an outbreak of lung illness related to vaping marijuana has peeled back some of its market share.

Altria had made what at the time seemed like a smart investment, taking a 35% stake in the e-cig company for $12.8 billion. That, however, preceded the FDA's railing against the popularity of the Juul device with teens and it calling both companies on the carpet for supposedly reneging on their promise to limit teen access to e-cigs by joining forces.

It was during this period that Philip Morris and Altria began discussing the possibility of reuniting their companies. However, with the FDA routinely pillorying Juul and the e-cig maker coming under more intense scrutiny from the Federal Trade Commission over its marketing tactics, Philip Morris announced that while the two tobacco companies had been in early talks about a merger, that was over and the two would instead "focus on launching IQOS in the U.S. as part of their mutual interest to achieve a smoke-free future."

They may soon have the entire market virtually to themselves. The FDA's deadline for e-cig companies to submit their applications to market their products is fast approaching. If companies don't submit, their products are subject to being removed from store shelves. Few companies will likely be able to comply.

Philip Morris' application was several million pages long, including supporting documentation, and cost millions of dollars to produce. The application for British American Tobacco's Vuse e-cig was several hundred thousand pages long. There are very few manufacturers that will be able to afford to file an application with the agency, so Philip Morris concentrating solely on the IQOS without distraction makes sense.

It also returns to Philip Morris investors the ability to decide for themselves if they want to be exposed to the litigious and highly regulated U.S. market. That was also one of the primary arguments against the two companies merging.

In business, like politics, it's often a case of never say never, but investors would probably be better off not making investment decisions based on the idea that a merger may one day happen. This is a story that seems to have come to an end.