Please ensure Javascript is enabled for purposes of website accessibility
Log In Help Join The Motley Fool
Free Article Join Over 1 Million Premium Members And Get More In-Depth Stock Guidance and Research
By David Butler - Jan 29, 2020 at 6:23AM

While things have leveled off, the future of the time-honored American company is still uncertain.

Shares of Harley-Davidson (HOG 1.04%) closed Tuesday around 3% lower after the American motorcycle maker reported a continued slump in sales in the fourth quarter. There were, however, some signs of improvement during the period, providing a measure of hope.

Still, the story is one of stagnation at best.

These sales results continued the trend that has plagued the coveted bikemaker in recent years. Overseas sales strengthened, while domestic demand continues to weaken. For the full year 2019, U.S. sales of Harley Davidson motorcycles declined 5.2%. The only market of growth was Asia Pacific. Total worldwide sales for 2019 declined 4.3%.

Total revenue from motorcycles declined by 9.7% in the fourth quarter to $666.3 million. Parts and accessories revenue fell a comparable 9.1% to $129.3 million. General merchandising, the smallest piece of the business, brought in $57.2 million in revenue. Not only did overall revenue from the motorcycle/related products segment of the business decline, but gross margins declined by 2.3 basis points to 25.2%. Operating losses for the segment were $46.5 million. This was a 22% improvement from 2018, but still marked negative operating margins of 5.3%. Full-year operating margins for this segment of the business were 8.5%. That's a 2.2 basis point decline from 2018. 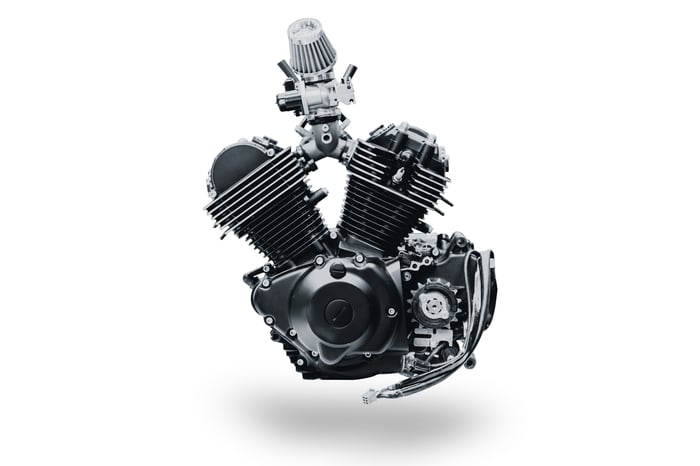 Total shipments declined 7% in the fourth quarter, and 6.4% for the year.

On the bright side of all this, Harley-Davidson noted that the sales declines have been leveling off. U.S. retail sales had their slowest year-over-year decline in 12 quarters, according to the Q4 earnings release. It will take more time to see whether this leveling continues.

Electric won't do it

Looking ahead, Harley-Davidson faces the challenge of easing into the interests of newer riders, while being careful not to alienate its loyal consumer base. Part of the problem here is that consumer tastes have shifted, and the generation that enjoyed most Harley bikes is aging. The problem is not limited to Harley. Polaris has been struggling to maintain momentum for its Indian Motorcycle brand.

Attempting to cash in on the EV craze, Harley has produced an electric motorcycle called the Livewire. It has a smaller, more nimble design than the traditional big hog Harley. While millennials and progressives certainly seem to have an appetite for this segment, the bike is fairly unaffordable for the average consumer. With a starting price of $29,799, the bike costs more than a lot of cars. Furthermore, does the consumer base that likes motorcycles really want a quiet bike that you have to plug in? While I'm sure these will sell to those seeking the novelty and "green" image, I don't see it as a large-scale seller.

Harley's 2020 outlook includes $4.53 billion-$4.66 billion in revenue from the motorcycle segment of the business. First-quarter results are expected to conservatively produce $1.09 billion in revenue. The company didn't provide figures on earnings estimates.

Through the last few years, Harley-Davidson has countered lower overall net income with an aggressive share buyback program. This in turn allowed for softer variations in earnings per share. Buybacks haven't necessarily been the worst deal for Harley, as its shares carry a pretty low valuation. There were 8.2 million shares left on the company's repurchase authorization as of the end of the year. So the amount of time for this to keep working is limited.

The thing about Harley-Davidson is that it's a cash cow, finishing the year with $833.9 million on the balance sheet. There's a lot of insulation here. The company is still a profitable enterprise, and there's a lot of time for the firm to try to find ways to improve the situation. That said, we haven't seen very much yet that implies Harley has found that answer. I reiterate my feelings that the current emphasis on the new electric bike is not the solution. If it were far less expensive, it would make sense. But how many buyers are going to purchase an electric bike that costs the same as a car?

Carrying a trailing P/E of 12.6 and a 4.4% dividend, Harley-Davidson might seem like a value bargain. If you're looking for stocks with growth, this is not one of them. Investors should keep savvy to the sales situation. This is a company trying to find its place in a different world.