Please ensure Javascript is enabled for purposes of website accessibility
Log In Help Join The Motley Fool
Free Article Join Over 1 Million Premium Members And Get More In-Depth Stock Guidance and Research
By Lou Whiteman - Jan 30, 2020 at 8:35AM

The Triton loses out to a fleet of modified business jets.

The German government has called off a $2.5 billion deal to purchase four MQ-4C Triton surveillance drones, deciding instead to deploy crewed business jets modified for surveillance.

The lost contract is a disappointment for Triton manufacturer Northrop Grumman (NOC 0.27%). But the reasons given for the decision should alarm not just Northrop, but all defense contractors hoping to see drone sales rocket higher in the years to come.

The U.S. State Department in April 2018 approved Germany's request to buy four Triton surveillance aircraft for $2.5 billion, a deal that would have marked the Triton's introduction into the European market. The order followed a failed effort by Northrop Grumman to sell a modified version of its RQ-4 Global Hawk drone, dubbed the EuroHawk, to Germany.

The State Department agency that approved the sale said at the time the deal would "support legitimate national security requirements" and "close a crucial capability gap" between the U.S. and its NATO allies. 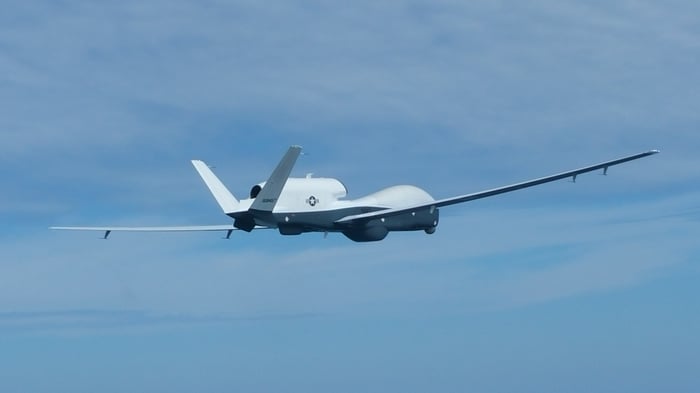 Developed during the last decade at an estimated program cost of more than $12 billion, the Triton is the next generation of U.S. high-altitude, long-endurance unmanned aerial vehicles (UAVs). The drone, working with a ground control station, is designed to patrol vast swaths of oceans and coastal regions.

The U.S. Navy is the primary customer for the Triton, with plans to buy as many as 68 drones, but contractors often can boost profitability by selling systems developed for the U.S. government to allied nations. Australia and India have been mentioned as potential buyers, but Germany was the firmest expression of interest.

But German officials in a confidential letter obtained by Reuters said that the drones would not be ready for delivery until at least 2025 and the high cost of the program could not easily be financed.

Instead, Germany will buy a fleet of Bombardier Global 6000 aircraft packed with sensors. The Global 6000 is certainly a safer choice. The plane has been in service since 1999 and is used by the U.S. and a number of other nations for military surveillance. The unit cost, listed at about $62 million apiece, is considerably less than the estimated $120 million price for each Triton.

While timing and cost seem to be the primary reasons for Germany's decision, there were also concerns about the drone's ability to operate within European airspace. Germany, according to reports, was concerned about the Triton's ability to win European Union Aviation Safety Agency certification.

Concern about airspace navigation was one reason that Germany gave for abandoning the Eurohawk, and this time military officials had hoped Northrop would be able to develop a technology safety package that would meet European regulatory scrutiny. Those hopes took a hit when Italy late last year was given tight restrictions on its fleet of Global Hawk drones when flying over land.

The issue is a concern not just for Northrop Grumman, but for others including Boeing, Kratos Defense & Security, and AeroVironment that are betting on a proliferation of drones in the years to come. While there are plenty of missions that drones are able to accomplish, and significant parts of the world where they face no operating restrictions, the dream of UAVs taking over routine missions like surveillance currently done by piloted aircraft will be put on hold at least until regulators are convinced those aircraft pose no danger to commercial operations.

Drones are top-of-mind for defense investors, and they're part of the reason Kratos, AeroVironment, and Northrop Grumman shares have all outperformed an index of defense stocks over the past five years. Europe's concerns could temporarily slow the momentum, at least in some applications, but it isn't a reason to abandon the sector. 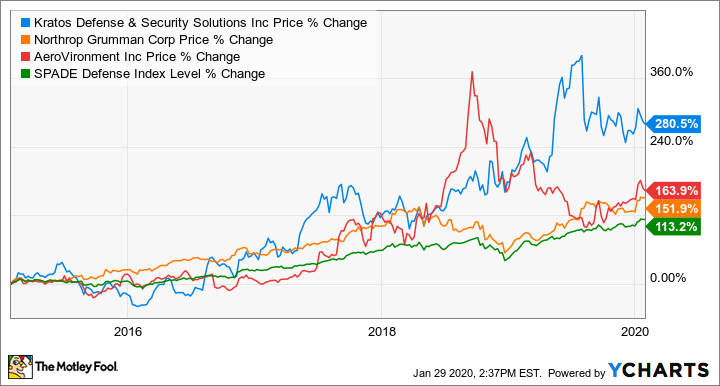 Drone stocks vs. the SPADE Defense Index data by YCharts

Worldwide production of UAVs is expected to grow to $10.2 billion annually by 2029, up from $7.3 billion in 2019, according to Teal Group research. Military UAV research spending is expected to add another $61 billion to contractor coffers by 2029.

Northrop, which also has massive contracts including the $80 billion B-21 bomber program and the $60 billion ICBM program as well as a large and growing space business, has plenty of other work to tide it over as the technology matures and regulations are developed. But investors in smaller contractors more reliant on drones should be aware that while the sector is full of promise, that promise often takes longer than expected to materialize.