Please ensure Javascript is enabled for purposes of website accessibility
Log In Help Join The Motley Fool
Free Article Join Over 1 Million Premium Members And Get More In-Depth Stock Guidance and Research
By James Brumley - Jan 31, 2020 at 7:30AM

The most recognizable name in lingerie may be more of a project than any buyer wants to tackle.

Read the headlines carefully, and you'll see L Brands (BBWI -5.10%) has neither confirmed nor denied rumors of lingerie retailer Victoria's Secret being put up for sale. Likewise, whispers that CEO Leslie Wexner is stepping down only cite unnamed "people familiar with the matter" as the source of the prospect.

Nevertheless, given the company's ongoing struggle to reverse its declining same-store sales and the fact that the sale prospect has been broached before, there could be some truth to the matter. Investors certainly felt that way on Wednesday after hearing the suggestion, sending shares higher to the tune of 12.9% by the close.

The market may want to tamp down the enthusiasm, however. L Brands could be interested in selling the Victoria's Secret brand and holding on to its (much) more successful Bath & Body Works brand, but that doesn't mean anyone's interested in buying a brand that needs a major overhaul. 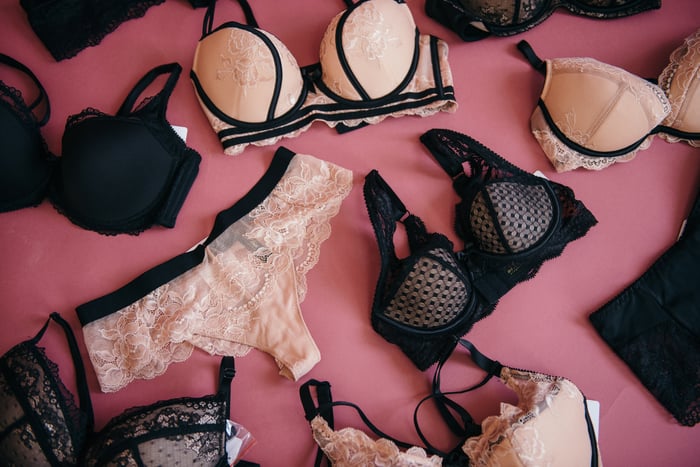 Not aligned with 2020 societal norms

In its heyday, it was all the rage. Any respectable mall in the 1990s was home to a Victoria's Secret store selling lingerie and other high-end undergarments, in an era where the sexualization of the female form was the norm.

But, times have changed. Victoria's Secret's customers in their 20s and 30s in 1990 are now in their 50s and 60s, and their 20-something and 30-something daughters aren't buying into some new cultural norms. Yes, the advent of the #metoo movement was and still is a factor, although a careful look at the shift reveals it was taking shape before movie producer Harvey Weinstein found himself in the spotlight for all the wrong reasons. The shift has also been rooted in more than just the objectification of one gender. The retailer has been criticized for excluding women that don't have model-esque bodies, which as it turns out are most women.

The damage the Victoria's Secret brand has suffered, however, goes beyond the typical frustration consumers might feel when a company lets them down. Tex-Mex food fans were irritated when Chipotle Mexican Grill was found to be the epicenter of an E. coli outbreak. It took a couple of years for the restaurant chain to recover from that letdown. Shoppers wanted J.C. Penney to continue sending them coupons in the mail. The retail giant still hasn't recovered from that letdown. For Victoria's Secret and what it stands for, though, too much of the consumer pushback has been unapologetically hostile.

Take last year's comment from the plus-size model Jessica Leahy as an example. She pulled no punches in saying "I can't wait to dance on Victoria's Secret's grave" after the company was essentially forced to cancel its annual fashion show. It was a strong comment, but one reflective of growing ire about the lingerie retailer's entire operational premise. Les Wexner's relatively close professional relationship with accused child sex trafficker Jeffrey Epstein is also a connection many consumers simply can't overlook.

It's particularly problematic considering the company's prime target market. Forrester data suggests almost 7 out of 10 millennials consider an organization's values before buying their products. The same-store sales trend says those consumers are balking. 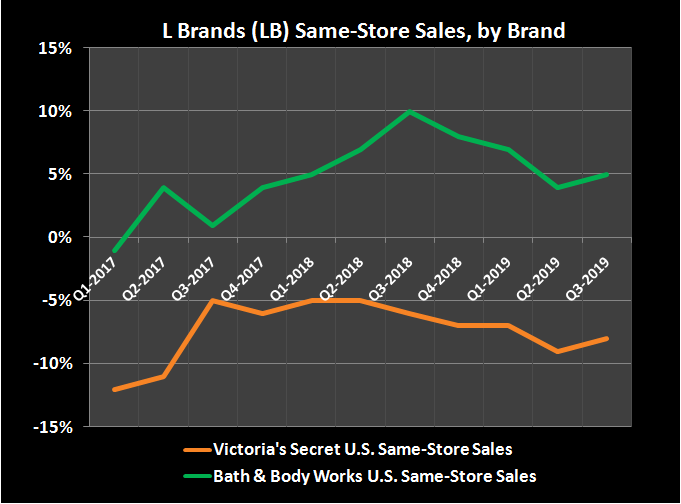 That's the proverbial rub for L Brands and any potential buyer of Victoria's Secret. It's a name that not only has to be rebuilt for relevancy in the 2020s, but it must also erase its reflection of a time when social norms were less than healthy. As Citigroup analyst Paul Lejuez put it last year: "It will be a tough balancing act to attract new customers without alienating its existing customer base. While we still think a change toward inclusivity is the right move, a move in that direction might be more difficult to pull off."

Raising the bar on the already-tall order is the need to do so in a market that's given rise to competitors like ThirdLove and American Eagle Outfitters (AEO -1.67%) brand Aerie. Both sell underwear but cater to comfort-seekers rather than to the shrinking number of consumers interested in uncomfortable lingerie. Aerie's promotional materials also feature women that look like and are shaped like "real people." Indeed, if nothing else, the rise of Aerie demonstrates there's room for new undergarment retailers even in a struggling brick-and-mortar world, while ThirdLove suggests even a direct-to-consumer underwear label can work.

That's not to suggest sexier attire is completely out of fashion. For occasions where something a little racier is in order, however, more accessible alternatives than Victoria's Secret still exist. Among all of its present challenges, Victoria's Secret stores are also fighting the headwind of a retail apocalypse.

Too far gone to command a premium

In 2018, Victoria's Secret's U.S. business generated $7.4 billion worth of revenue, with three-fourths of it still being driven by physical stores. It's on pace to do about $7 billion in sales for all of fiscal 2019, and has logged several consecutive quarters of declining same-store sales. Operating income of $300 million in 2018 could be pared down to nothing once 2019's final figures are reported. Technically speaking -- assuming nothing changes -- there'd be no measurable benefit in acquiring the name at all. 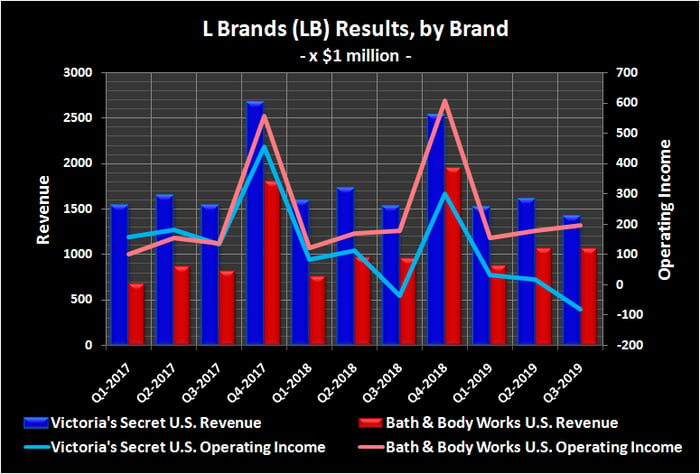 As such, the only motivation to buy the Victoria's Secret brand would be absolute certainty on the part of the buyer it could do something that Wexner hasn't tried yet. Perhaps worse, a suitor would have to undo much of what has been done to damage the brand.

That's going to make it tough to find a buyer at a price that investors can live with.