Please ensure Javascript is enabled for purposes of website accessibility
Log In Help Join The Motley Fool
Free Article Join Over 1 Million Premium Members And Get More In-Depth Stock Guidance and Research
By James Brumley – Feb 1, 2020 at 9:45AM

The e-commerce giant's convenience markets are tipping their hand by trying out new handheld food options.

It's one of those in-store initiatives most investors might simply dismiss. In this case though, the fact that Amazon.com (AMZN -0.64%) is introducing hot foods and fountain sodas at its Amazon Go store in San Francisco's financial district speaks volumes. Such grab-and-go offerings have always been used by grocers and convenience stores to round out a shopping trip. But, given the rising levels of busyness consumers contend with every day, ready-to-eat meals could become a key differentiator between Amazon's grocery stores, Kroger (KR -1.58%), Walmart (WMT -0.27%), and any other player that dares to take on those big three.

There's a shocking paradigm shift under way in America. Consumers are busier than ever, and they're caring less and less about who solves their time-based and appetite problems.

The evidence: The National Association of Convenience Stores reports 56% of U.S. consumers now purchase a meal from a gas station at least once per month. Three-fourths of those customers are seeking healthier options when they do so, and perhaps more shocking is, they're usually finding them. Vegan hamburgers and cauliflower-crusted pizzas aren't exactly unusual or exotic gas station fare anymore. 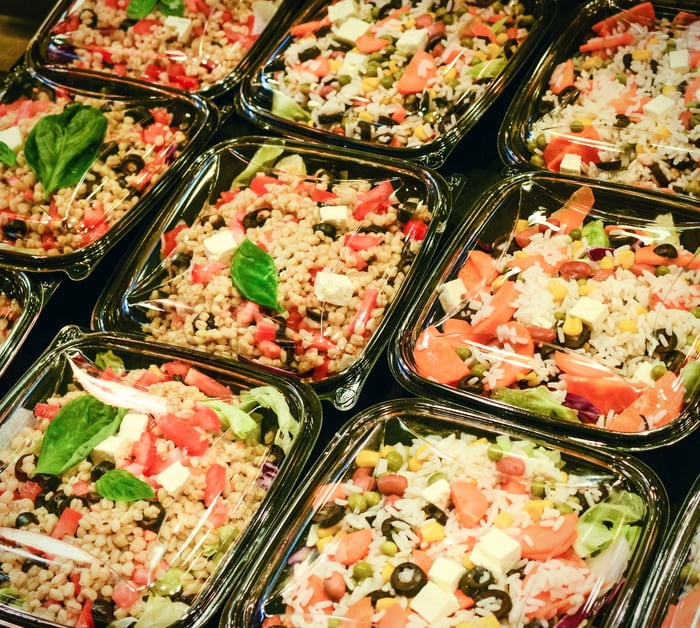 It's a sign of the changing times, though it's hardly the only evidence of the trend. The Food Marketing Institute reported last year that while ready-to-heat meals and snacks were important options to 63% of grocery store shoppers, ready-to-eat choices -- complete meals that can be immediately eaten right out of the container -- were important to a greater 68% of consumers polled.

Traditional quick-service restaurants are being left out of that growth for a couple of different reasons. One of them is convenience. Sometimes supermarkets are just more accessible. That's certainly been the case for Amazon Go stores, which tend to be found in busy urban settings where a full-blown grocer isn't. The other, bigger reason the model is working is health-related. For all their efforts, most quick-service restaurants can't offer the variety of fresh salads, pre-packaged sandwiches, and bottled drinks Amazon Go locales do.

Now Amazon is taking the idea of grab and go to the next level, planning to add hot food, fountain sodas, and espresso machines at one location in San Francisco. Presumably, if the experiment works, other Amazon Go stores will do the same.

It's no small matter. Aside from additional licensing, the new fare will mean more workers to maintain these additional items despite the fact that Amazon Go stores were intended to be self-service shops with a modest labor requirement. The company is bothering because it's a market worth penetrating. The Food Industry Association estimates the prepared foods market (including deli foods) is worth $12.7 billion per year. For perspective, the fast-food business in the U.S. generates on the order of $270 billion worth of revenue per year. The grab-and-go opportunity arguably lies somewhere between the two.

Regardless, it's a cultural shift that grocers and convenience stores still haven't completely pinned down.

The advent of meal kit companies such as Blue Apron (APRN 12.08%) and similar choices from grocers initially looked like the answer to the time and health challenges. Pre-portioned meals in a box take no shopping time and only a little bit of prep time. As it turns out, however, that's not quite how Americans actually eat. Research suggests one-fifth of meals eaten in the United States are consumed in a car, and a Mondelez International report published last year indicated 59% of adults worldwide would rather snack than eat a meal. Then, sadly, while meal kit food is generally healthier than prepared foods to go, far too many consumers feel meal kits are overpriced compared to grab-and-go options.

The grocery and convenience store industry is quickly learning the nuances of the new norm, however. Amazon's foray into hot foods is another layer of evidence to this end, and this highly fragmented piece of the foodservice market should sprout more dominant providers soon. Kroger is well-positioned to emerge as the leader thanks to its sheer exposure to consumers and its network of suppliers, but Amazon's reported plans to build up to 3,000 Amazon Go stores could make a dent in that dominance. That's particularly true given these Go stores are located in densely populated areas.

Doing something with the traffic

The grab-and-go phenomenon still isn't exactly a game-changer for Kroger, Walmart, and even Amazon, as it expands its physical footprint. Convenience is still critical, and these companies' stores aren't always near large crowds. Even the biggest players in the business won't enjoy a majority of what's apt to be a low-margin market anyway. Profit margins on groceries, for example, are often in the low-single digits, and the labor costs of prepping and packaging grab-and-go goods could easily turn them into a losing proposition.

Kroger and Amazon don't have to make a ton of profit with grab-and-go, however, for it to be a valuable addition to their menu of services. Grab-and-go can easily drive traffic to a store which then induces other purchases. That's how investors should really judge the success of any particular company's grab-and-go initiatives.

To that end, Amazon may have the most to gain. RBC estimates the average ticket size per Amazon Go visit is only about $10, which leaves lots of room for improvement.

John Mackey, CEO of Whole Foods Market, an Amazon subsidiary, is a member of The Motley Fool’s board of directors. James Brumley has no position in any of the stocks mentioned. The Motley Fool owns shares of and recommends Amazon. The Motley Fool has a disclosure policy.