There's no need to overthink this decision.

T-Mobile US (TMUS 3.06%) and Sprint (S) are both cellular network providers, coming in as the third- and fourth-largest respectively. In early 2018, the two companies announced a merger that would move them to the top-tier status of AT&T and Verizon -- if approved. But it's been nearly two years since the merger was announced.

Regulators fear that less competition will be bad for consumers. To calm this fear, Sprint and T-Mobile agreed to divest some parts of a merged business to DISH Network and allow use of towers to help DISH become a legitimate cellular carrier competitor. That move was enough to gain federal regulatory approval; however, certain state attorneys general are still attempting to block the deal with a lawsuit.

If the merger happens, investors in either company will end up owning both. But the merger might not get final approval. In that case, there's a clear choice if you have to invest in just one of these stocks today. 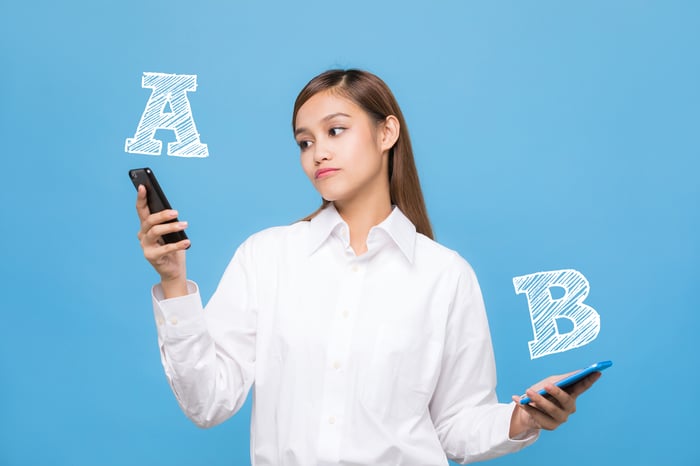 Can a case be made for Sprint?

But there's a catch to these subscriber numbers. Sprint actually lost 115,000 postpaid phone subscribers in Q3. These are the most desirable accounts for a cell carrier, since the average revenue for phones is higher than data devices.  This a sign of a weakening business, and spending grow its customer base is putting a strain on the bottom line. Through the first three quarters of fiscal 2019, Sprint had a net loss of $505 million compared to net income of $231 million in the year-ago period.

Now, Sprint might be on value investors' radar, since it does look cheap by a couple of metrics. It currently trades below sales (T-Mobile trades at 1.6 times sales for comparison), and below book value. And it is still the fourth-largest cell network by subscribers, and that certainly has at least some value. Under the original merger agreement, every 9.75 shares of Sprint would convert to one share of T-Mobile, translating to 81% upside for Sprint shareholders if the deal happened today. And if the deal doesn't go through, there are other companies that might be interested in paying a small premium for Sprint's assets.

However, in the meantime, Sprint has a cash problem. Through the first three quarters of fiscal 2019, the company had adjusted free cash flow of negative $536 million, and a year-over-year decrease in cash and cash equivalents of $3.8 billion. That leaves just $3.2 billion in cash and equivalents on the balance sheet, compared to $37.4 billion in debt. Not to mention that if the merger falls through and Sprint is forced to go it alone, it'll need to shell out more money to enhance it's 5G offering -- money that's running low.

If things are so bad at Sprint, then why would T-Mobile even want to merge with it in the first place? The answer boils down to 5G, which refers to the fifth generation of cellular networks. Within 5G, there are a variety of spectrum options -- wavelengths -- each with its own set of pros and cons.

T-Mobile claims nationwide 5G coverage, which is true. But it offers low-band spectrum. Low-band spectrum isn't terribly fast for downloads, but it travels farther and isn't disrupted as much by obstacles. Sprint on the other hand offers mid-band spectrum. It's much faster, but not as reliable. In a merger, the "New T-Mobile" would be able to offer both low-band and mid-band 5G connectivity, for a better overall customer experience.

That said, the company would need to use a lot of that cash if the Sprint merger fails. Consider that even with combined 5G assets, New T-Mobile plans to spend $40 billion over three years to continue building out its network. Spending to upgrade is just part of doing business, but without Sprint, T-Mobile will have much further to go.

For now, T-Mobile has strong operations without Sprint. The company has released preliminary full-year 2019 customer results showing that the company added over 7 million net new customers in the year, including 1.9 million in the fourth quarter alone. Over half of those Q4 customers were postpaid phone customers.

And while Sprint has a cash flow problem, T-Mobile has exactly the opposite. In the first nine months of 2019, the company generated $2.9 billion in free cash flow on revenue of $33.1 billion. In other words, it converted almost 9% of revenue into free cash flow, showing this is a financially strong business.

To me, the choice is clear. The risk Sprint is facing isn't worth taking on in hopes of a buyout or merger. In investing, the best approach is to buy great companies you'd be comfortable holding for at least three to five years, and I can't say that about Sprint. I would feel more comfortable hitching my wagon to T-Mobile if forced to choose.