Please ensure Javascript is enabled for purposes of website accessibility
Log In Help Join The Motley Fool
Free Article Join Over 1 Million Premium Members And Get More In-Depth Stock Guidance and Research
By Harsh Chauhan – Updated Feb 3, 2020 at 10:06AM

The recent sell-off makes this chipmaker a good bet right now for anyone looking for a hot 5G stock.

Skyworks Solutions (SWKS -5.84%) turned in a terrific performance in 2019 thanks to the improving fortunes of its leading customer, Apple, the deployment of 5G networks, and the gradual improvement in its financial performance. However, that didn't prevent Skyworks investors from taking some money off the table after the company's latest quarterly results.

Skyworks' top line dropped year over year, and its earnings shrank. The company's revenue fell nearly 8% year over year, while net income was down close to 10% annually. The surprising thing is that there was nothing unexpected about the chipmaker's latest performance.

Wall Street was looking for $880.6 million in first-quarter revenue, and Skyworks delivered $896 million. Adjusted earnings of $1.86 per share also trumped the consensus estimate of $1.83 per share. What's more, the chipmaker's outlook was much better than the market's expectations as it prepares to make a return to top- and bottom-line growth.

However, Skyworks stock headed south after the earnings report. Savvy investors should consider this a buying opportunity as the chipmaker could still turn out to be a top growth stock this year, and it's now selling on the cheap.

Demand for Skyworks' connectivity chips should get better this year thanks to the impending smartphone upgrade cycle, which will be driven by the deployment of 5G (fifth-generation) wireless networks. As it turns out, 5G networks are expected to gain critical mass in 2020, with deployments gaining pace across the globe.

More importantly, 5G smartphone sales are expected to more than double in 2021 to 489 million units, according to Gartner. This anticipated turnaround in the smartphone space should come as a huge relief for Skyworks as the mobile market accounts for 73% of the company's overall revenue.

Smartphone shipments dropped 2% in 2019, and that was enough to dent Skyworks' financial performance. But now that a turnaround is in the cards, Skyworks' outlook is getting better. The company anticipates $1.46 per share in earnings this quarter on revenue of $810 million, according to the mid-point of its guidance range. That's almost identical to the prior-year period's numbers.

Analyst estimates compiled by Yahoo! Finance predict that Skyworks' top line could grow nearly 4% this fiscal year. The chipmaker's financial performance is expected to pick up a few notches in fiscal 2021, with forecasted revenue growth of over 11%. It won't be surprising to see Skyworks hit those targets given the anticipated jump in smartphone sales both this year and the next.

Well, the way we're seeing it right now we believe we're absolutely gaining share in 5G and the rollout of these new highly complex phones are exactly what we want to see. We're continuing to gain share with our Sky5 platform.

We're seeing that across a number of customers, great position in China with a number of leading players, position at Samsung and then also with some of the larger players in the US that haven't even launched their 5G phone yet.

Skyworks management is upbeat about the company's prospects going into the second half of the year, and it is not difficult to see why. Apple, Skyworks' largest customer that accounts for just over half of its total revenue, is expected to launch a bunch of new 5G-enabled iPhones this year at various price points.

And as Apple is expected to dominate the 5G smartphone market in 2020, Skyworks could win big.

The latest pullback in Skyworks stock makes it an enticing buy. The company's trailing price-to-earnings (P/E) ratio has slid as of late, while the stock's forward earnings multiple has also come down, to nearly 17. 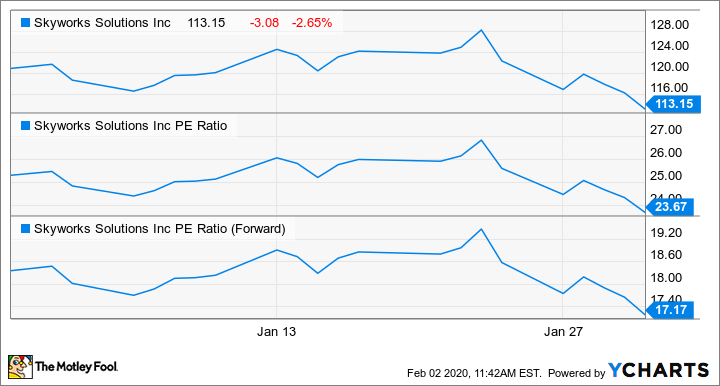 As Skyworks stock is more affordable than before, going long makes sense given the anticipated improvement in its financial performance.