Please ensure Javascript is enabled for purposes of website accessibility
Log In Help Join The Motley Fool
Free Article Join Over 1 Million Premium Members And Get More In-Depth Stock Guidance and Research
By John Bromels - Updated Feb 3, 2020 at 8:42AM

Low prices have been hitting companies across the energy sector as they report their fourth-quarter 2019 earnings. Even the industry bigwigs aren't immune: Top U.S. oil major ExxonMobil (XOM 2.23%) reported lackluster numbers for the quarter on Jan. 31.

While production numbers were up very slightly year over year, earnings missed expectations. And when you look more closely, things are even worse than they initially seem. Shares opened about 2.8% lower and continued to decline throughout the morning. Here's what investors need to know, and what it means for the company moving forward. 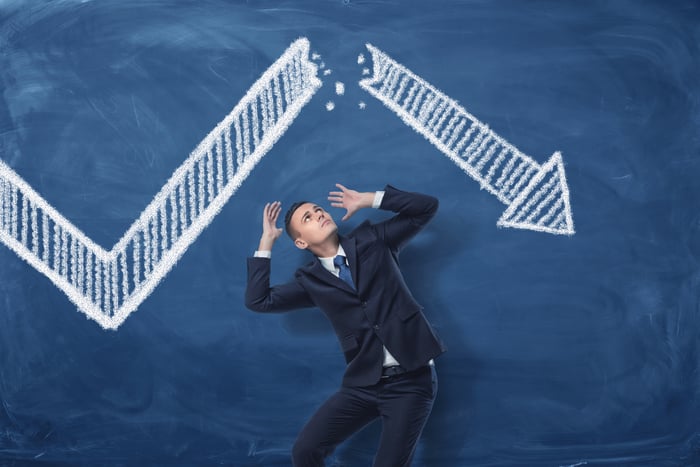 The year-over-year change isn't good, but things would have been even worse had Exxon not closed a big asset sale in Norway during the quarter, which added $3.7 billion to earnings in its upstream division. Without that boost, net income would have dropped by 66% from the prior year. Keep that in mind when looking at the chart below. Without that boost, the rightmost green bar (Q4 2019 upstream earnings) would be sitting at $2,458 million, only a slight increase from the prior quarter (the adjacent yellow bar): 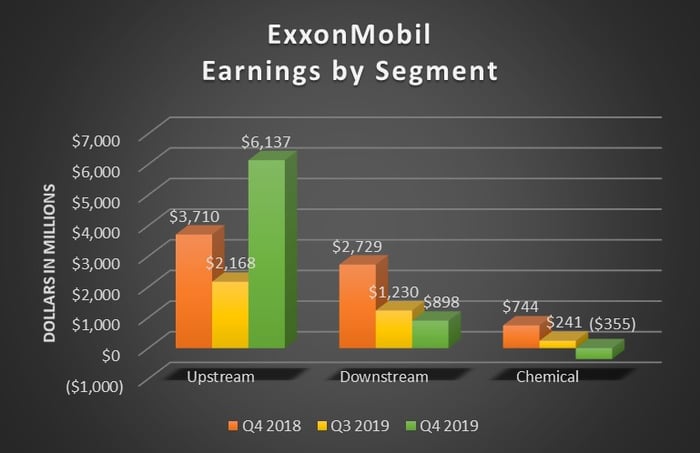 A big asset sale in the upstream division offset continuing declines in the downstream and chemical divisions. Data source: ExxonMobil. Chart by author.

The chemical division posted a net loss in Q4 2019 thanks mostly to weak petrochemical pricing, which drove down margins. Likewise, weaker margins -- especially overseas -- were the primary culprit for the lower earnings in the downstream segment. Lower gas prices were primarily to blame for the weakness in the upstream unit. Surprisingly, despite crude oil prices being generally lower in Q4 2019 than in Q3 2019, Exxon was able to realize higher overall liquids prices during the quarter.

If the quarterly numbers looked bad, annual figures looked even worse, with per-share earnings down 31.1% to $3.36/share. One bright spot in the annual figures showed up in the company's production volumes, which has been an area of concern for the company in recent years. Overall annual production in 2019 rose by 3.1% over 2018, which should help ease concerns of a long-term production slowdown.

CEO Darren Woods was pleased with the quarter's results, given the underlying weak market conditions:

Our operations performed well, while short-term supply length in the downstream and chemicals businesses impacted margins and financial results. Growth in demand for the products that underpin our businesses remains strong. We remain focused on improving our base businesses, driving efficiencies, and optimizing the value of our investment portfolio.

Times are tough all over

Exxon's far from the only oil and gas company to post dismal results this quarter. Lower oil and gas prices, tumbling refining margins, and weak petrochemical pricing combined for a triple-whammy that left few energy industry companies unscathed. Exxon lucked into a big asset sale during the quarter that stemmed the bleeding, but it's unlikely to pull such an ace from its sleeve in the first quarter of 2020.

While Exxon's long-term prospects remain strong, especially considering its overall increase in production in 2019, things are already shaping up to be a bit worrisome in Q1. Global oversupply concerns remain. Combined with concerns about the impact on the global economy from the emerging Coronavirus, oil prices have fallen to levels about even with Q4's low point -- and we have two more months of Q1 to go. If oil prices stay low, or fall even further, investors should brace themselves for a rocky road ahead for ExxonMobil.