People's United Financial has been quietly expanding through acquisitions.

2019 was the most active year for mergers and acquisitions in the banking industry since 2016. According to American Banker, there were 271 mergers announced last year -- a 5% increase from the previous year. Activity may have been delayed for a couple of years because of the tax reform bill, but it picked up last year, especially after the successive rate cuts may have pressured more deals.

There were some mega deals like BB&T and SunTrust, which became Truist, and Charles Schwab and TD Ameritrade, which was announced in the fourth quarter. But the bulk of the deals were done by smaller, regional banks. One of the most active participants in the M&A carousel was People's United Financial (PBCT).

People's United Financial, which is based in Bridgeport, Conn., and serves as the holding company for People's United Bank, acquired two banks and a specialty finance company last year. The company is in growth mode, and it's a stock that may be flying under your radar. 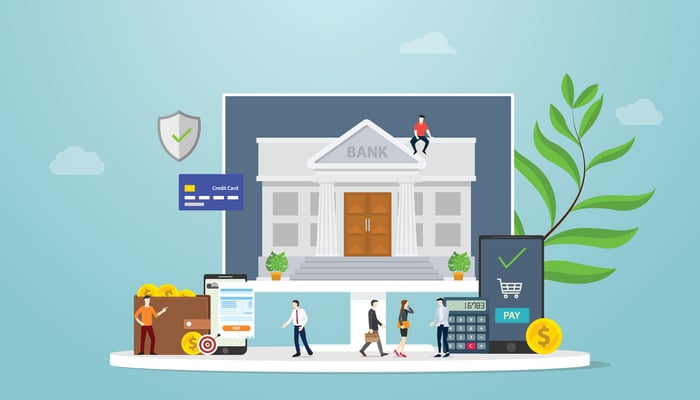 Last year, People's closed on two bank acquisitions. It purchased BSB Bancorp, the holding company for Belmont Bank, which has branches throughout the Greater Boston area. This was considered a key strategic acquisition, as it allows the bank to expand its footprint in the Boston area. It also acquired United Financial Bancorp, which is the holding company for United Bank, a bank with branches throughout Connecticut and western Massachusetts. At the end of 2018, it closed on a deal to buy First Connecticut Bancorp., which owned Farmington Bank, a community bank located in Central Connecticut.

With the acquisitions, People's United has about $58 billion in assets under management, with more than 400 branch locations in Connecticut, New York, Massachusetts, Vermont, New Hampshire, and Maine. Assets jumped 22% over the year-end total last year.

People's United had a strong year. Operating earnings increased 20% to $552 million for the full year, while earnings per share increased for the tenth consecutive year to $1.39, up from $1.31. Net interest margin (NIM) increased slightly to 3.14% from 3.12%. NIM is the measure of how much money the bank makes on interest it earns versus interest it pays out -- and in a year of declining interest rates, staying flat is good.

While the expenses were up, due to the acquisitions, the efficiency ratio, or the ratio of expenses to revenue, declined to 55.8% from 57.4%. Lower is better, as it means the bank is making more than it's spending.

Loan balances were up 24% for the year, boosted by the acquisitions, but even excluding the acquisitions, they rose 11%. Credit quality is very good with a low and declining ratio of charge-offs, or delinquent loans. Deposits were also up 21%.

In 2020, with a full year of Belmont and United in the fold, CEO Jack Barnes said on the fourth-quarter earnings call that he expects loan and deposit growth of 2% to 4%. Barnes also expects net interest income to increase 9% to 11%, with NIM in the same 3% to 3.1% range. These assumptions are based on no change in the Fed funds rate. Costs will increase due to the continued integration of the acquisitions, with expenses expected to be in the range of $1.19 billion to $1.22 billion -- up from $1.097 billion in 2019.

But overall, with the added scale in a consolidating market, the expanded presence in Boston, and the revenue opportunities from the VAR acquisition, People's United should continue to be a stable performer. It has not lowered its dividend since 2007, which is a good indicator of its long-term stability. In a market that's expected to be more volatile, it's worth putting on your radar as a cheap, defensive bank stock.