Please ensure Javascript is enabled for purposes of website accessibility
Log In Help Join The Motley Fool
Free Article Join Over 1 Million Premium Members And Get More In-Depth Stock Guidance and Research
By Daniel Foelber - Updated Feb 4, 2020 at 8:48AM

The struggling airline seems to be making a comeback.

American Airlines (AAL 1.73%) has had a rough go of it the last five years, losing nearly half of its value.

Amid an onslaught of the fallout from the Boeing (BA 1.26%) 737 MAX groundings, uncertain future growth, and a weak balance sheet, things weren't looking good for American Airlines until the company reported some positive news in its fourth quarter 2019 report.

Is a turnaround in store for the airline, or are its problems far from over? 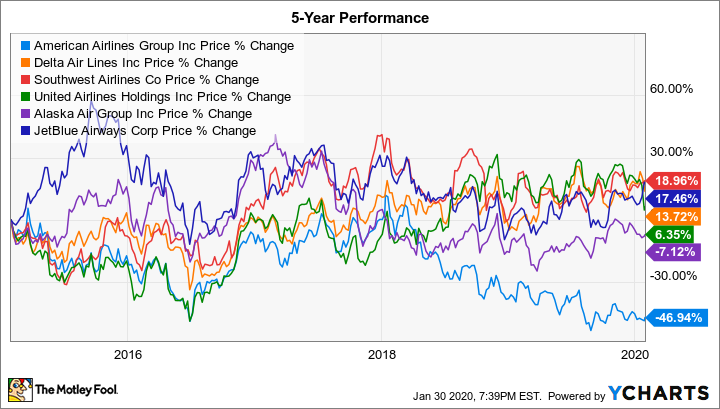 As the second-largest owner of 737 MAX aircraft behind Southwest Airlines, American Airlines has spent 10 tiresome months dealing with the consequences of an undersized fleet by canceling flights and reassessing the timeline for the MAX's return to service.

American had originally planned to have 100 737 MAX 8 aircraft in its fleet, but the additional 76 aircraft, like all orders, have been placed on hold. American blamed the MAX groundings as the primary reason it didn't have better third quarter 2019 results, and in the fourth quarter of 2019, CEO Doug Parker noted the groundings have brought "a lot of uncertainty and frustration to our customers, our team and our shareholders." Parker went on to say,

"The financial cost of the MAX grounding should be borne by Boeing shareholders, not American. We're pleased that recently, we reached a confidential settlement with Boeing to compensate American for the financial damages we incurred in 2019 due to the grounding of the MAX."

Going forward, American has suspended flying of the MAX through June 3, 2020, and plans to hold Boeing accountable for future financial damages. 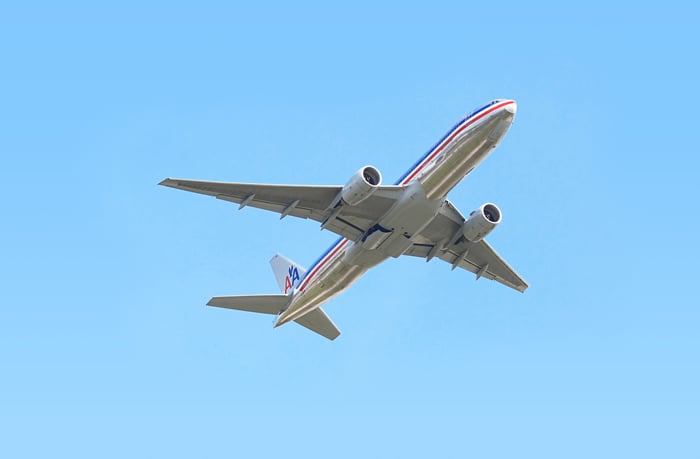 In its fourth quarter 2019 report, American Airlines announced an aggressive goal of $6 billion in Free Cash Flow (FCF) over the next two years. The surge in FCF should help American fix what may be its biggest problem: debt.

American Airlines has more net long-term debt than the other five major U.S. airlines combined. Also concerning is American's debt to capital (D/C) ratio, which is the highest of the group and now exceeds 100%, meaning the company is highly leveraged and prone to using debt financing over equity financing. 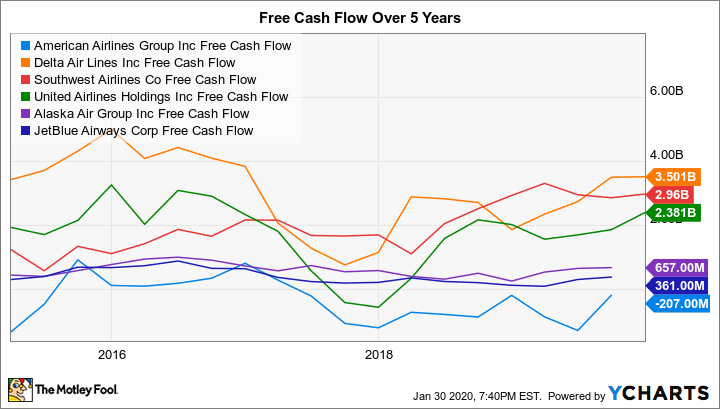 $6 billion in FCF over the next two years is a great goal, but American hasn't had a year of positive FCF since 2016, when it posted just under $800 million in annual FCF. Generating positive free cash flow would be a big step in the right direction for American Airlines to pay down debt and continue to distribute income to shareholders in the form of dividends.

That being said, it's unlikely American will raise its dividend anytime soon, considering its quarterly payout of $0.10 per share has been unchanged since 2014.

Whether filled or not, there are several costs associated with flying that seat one mile, such as crew salaries, airport costs like landing fees, plane payments, insurance, and maintenance, taxes and charges, and the administrative costs of running the airline.

Like any company, it's a good thing if costs can be limited while growing revenue. Seeing as TRASM is crucial to airline financials, it was quite the scare when American only grew TRASM 0.5% year-over-year in the fourth quarter of 2019, which came a little too close to snapping the company's streak of 12 consecutive quarters of TRASM growth.

In a year where growth is expected to slow, according to United Airlines and Delta Air Lines, and American is still dealing with the MAX problem, it's impressive that the company is guiding for 0% to 2% of TRASM growth for the first quarter of 2020.

The fourth quarter of 2019 was an important quarter for American Airlines because it painted a picture of what a turnaround would look like by directly addressing free cash flow.

Capital investment should start to decline as a result of the airline's completion of its "historic fleet renewal program", which would bolster free cash flow aside from organic growth. Agreements with Boeing help with the short-term pain of a diminished fleet and painstaking rescheduling.

Simply put, if American hits its goal of $6 billion in FCF over the next two years, it would make the company a better candidate for a value investment given that the airline has the lowest P/E ratio of the six major U.S. airlines.

American Airlines isn't out of the woods yet, but the company has constructed a plan that, if executed, could reverse the stock's downward trend.