Please ensure Javascript is enabled for purposes of website accessibility
Log In Help Join The Motley Fool
Free Article Join Over 1 Million Premium Members And Get More In-Depth Stock Guidance and Research
By Daniel Foelber - Feb 4, 2020 at 8:20AM

Southwest proves resilient in the face of adversity.

If there's one thing long-term investors love to see, it's resilience in the face of adversity. Southwest Airlines (LUV 4.98%) managed that last year, the results evident after the company capped another banner year of performance. Let's dive into the key takeaways from Southwest's fourth quarter and full-year 2019 results to get a better sense of the company's handling amid a crisis.

2019 was a great example of how solid management and a great balance sheet can help lead a company through the rough times. "This is our 49th year and there, at least in my experience, there is no more remarkable year than 2019," said CEO Gary C. Kelly during the fourth-quarter conference call, continuing:

The grounding of effectively 75 of our airplanes which is about 10% of our fleet presents a crisis like challenge, and our people are ready for it with the best planning, tools and technologies in our history, but more importantly with the right fortitude and the right resolve to get through this crisis. 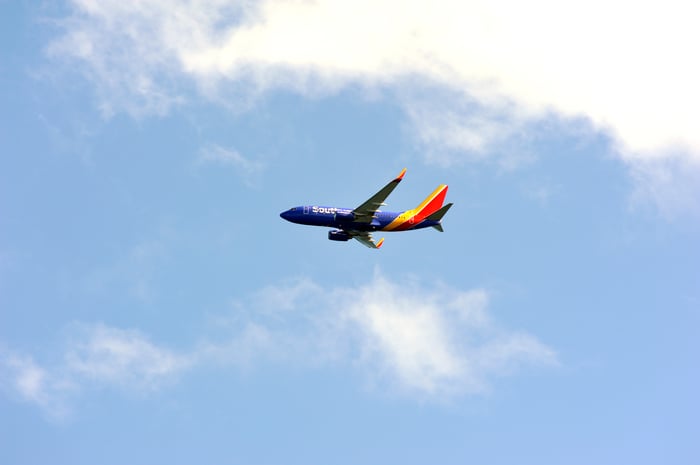 While it's not always a good idea to take management's musings for granted, the company's ability to stomach $828 million of operating income losses throughout 2019 and still deliver record earnings per share of $4.27 is impressive considering the groundings persisted through nearly 10 full months of 2019. At the current stock price, earnings per share of $4.27 give Southwest Airlines a P/E ratio of 13.1, which is on the high end for airlines but vastly lower than the P/E of the S&P 500, which currently sits at around 24.

Investors should note that Southwest reached a confidential agreement with Boeing (BA 5.64%) that essentially discounts the cost basis for owned and future purchases of the MAX, but Southwest will continue to incur damages in 2020 as long as the MAX is grounded. Boeing is basically giving Southwest a coupon on the purchasing and owning of its planes, which will help Southwest in the long term.

Southwest's problem negatively affects its customers as well as its earnings. The company has already canceled flying the MAX until June 6, uncomfortably close to the peak annual travel season of June through August. Southwest is the most exposed U.S. airline to the MAX groundings and the only major U.S. airline that operates an exclusively Boeing fleet. Although the company was able to perform in 2019, it's going to be another challenging year if the MAX remains grounded through the summer travel season, especially considering Southwest was expecting to have 75 MAX aircraft by the end of 2019 and 38 additional deliveries in 2020. If the MAX remains grounded well into the summer travel season, Southwest will have a severely understaffed fleet for most of 2019, likely crippling earnings. Southwest expects the problem to only persist in a timeline of months, not years.

As far as a relationship with Boeing, Kelly made it clear: "There is no change in our efforts to evaluate the risk-reward of a single aircraft type or supplier. We'll do that. It's just a lower 2020 priority." That being said, if Southwest is forced to remove the MAX from its third-quarter 2020 flight schedule, it will be a repeat of fourth-quarter 2019, which resulted in fewer flights during peak travel periods.

By now, it should be clear that Southwest is doing what it can to handle the MAX groundings, but the company's earnings will continue to be heavily affected -- arguably more than any other airline -- due to Southwest's single-supplier strategy and exposure to the MAX. In terms of financials, though, Southwest retains its status as one of the most elite airlines. 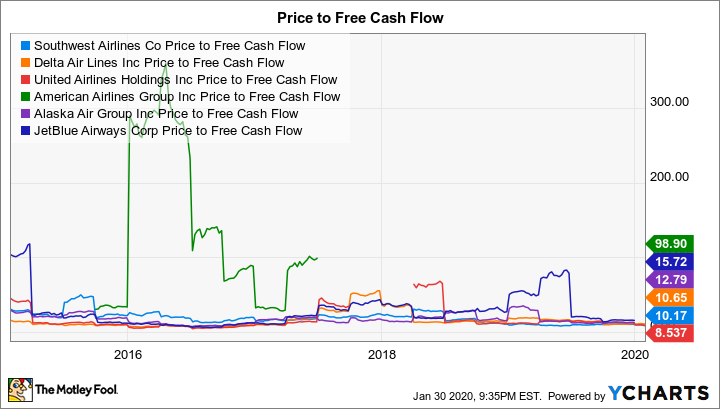 2019 generated a record $3.4 billion in free cash flow (FCF). Free cash flow is a means to fund growth outside of typical operations, such as returning cash to shareholders in the form of a dividend or buying back stock. Although not an elite dividend stock, Southwest yields 1.3% and has raised its dividend 200% over the past five years. 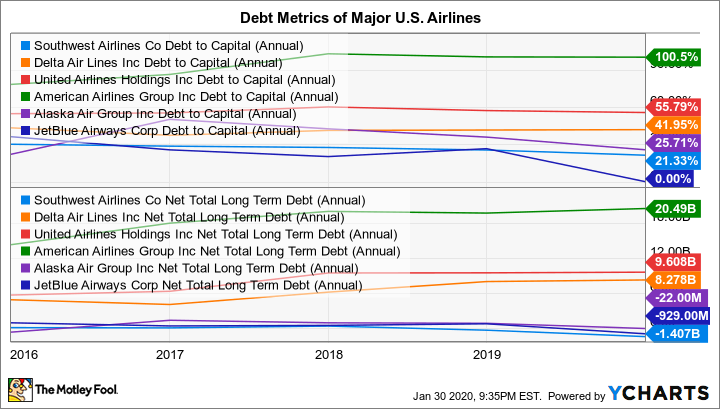 Compared to its competitors, Southwest has the second-lowest price to free cash flow among major U.S. airlines at just 10.17 times earnings. But since airlines are capital-intensive businesses, it's also important to look at debt. Southwest has the second-lowest debt-to-capital ratio among the cohort and the lowest net long-term debt due to its ability to fund its operations through operating cash flow instead of debt financing or equity financing.

Due to a track record of solid financials and management's ability to steer the company in the right direction amid a crisis, Southwest deserves consideration as a value stock for long-term investors. It's one thing to perform in fair weather, but quite another when factors outside of your control come crashing down. 2019 and 2020 may provide an excellent case study of an airline's ability to handle safety concerns, but I'm sure Southwest would prefer to put this whole thing behind it.