Markets continued to climb Wednesday on hopes for a quick resolution to the coronavirus epidemic.

Stock market benchmarks gained ground again on Wednesday morning, with more good news in the fight against the coronavirus spurring follow-on buying after Tuesday's big jump. Researchers have apparently found some promising drug treatments that might be able to fight the virus, and the potential quick removal of the epidemic from the list of worries plaguing market participants was welcome. As of 11:15 a.m. EST today, the Dow Jones Industrial Average (^DJI -1.71%) was up 304 points to 29,112. The S&P 500 (^GSPC -1.51%) had risen 27 points to 3,324, and the Nasdaq Composite (^IXIC -1.51%) picked up 26 points to 9,494.

Earnings season isn't over yet, and automaker Ford Motor (F -2.35%) wasn't able to hit the accelerator pedal the way that some shareholders had hoped to see. Meanwhile, coal miner Peabody Energy (BTU 0.89%) saw its shares soar on news that activist investors have come to terms with the company in an agreement that could help its long-term prospects.

Shares of Ford dropped 10% after the automaker reported its fourth-quarter financial results. Despite assertions that portions of the global giant's business did well, investors weren't pleased with what they saw from Ford overall. 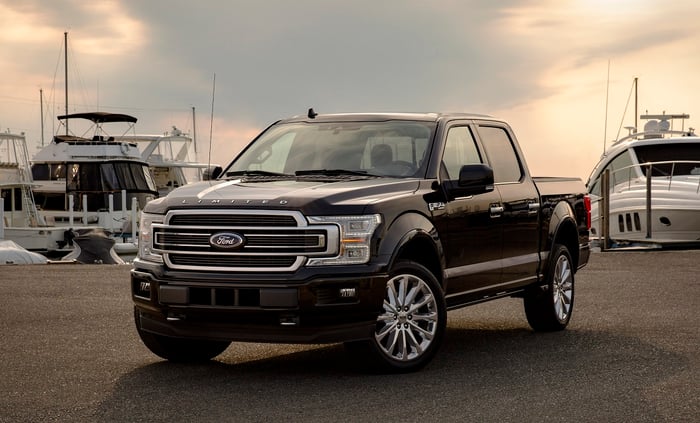 Headline numbers were uniformly problematic. Revenue dropped 5% year over year, and the automaker saw an unexpectedly wide net loss of $1.7 billion for the period. Even after accounting for some one-time items, adjusted earnings per share were down by 60% from year-ago levels, and adjusted free cash flow fell by two-thirds.

Ford tried to accentuate the good parts of its report. Europe posted a modest pre-tax operating profit for the quarter, reversing year-ago losses, and Ford's operating losses in China were about 60% smaller than in the year-earlier period. Yet despite attempts to boost efficiency and cut structural costs, Ford had to deal with challenges with labor expenses, higher costs for new products, and lower launch volumes.

Its outlook for 2020 was also downbeat, as the company sees warranty-related costs eating into profits. With a lot of attention on the electric vehicle side of the auto industry right now, Ford's results show just how difficult it's been for legacy automakers recently.

A big day for Peabody

Shares of Peabody Energy soared 28% Wednesday morning. Investors reacted favorably to news of an agreement between the coal miner and its largest shareholder, Elliott Management.

Under the terms of the agreement, Elliott Management will appoint three new directors to the board, and work with Peabody to pick a fourth director with mining operations experience. Peabody also agreed to nominate all four directors at its annual shareholder meeting in May.

Company executives seemed content with the deal. Board chairman Bob Malone said, "We're pleased to welcome these skilled and experienced professionals to our board," and Peabody pointed to a closer relationship with Elliott Management as potentially advantageous for all involved.

The stock has been in a steady slide for years, and the prospects for the coal industry remain uncertain. With Elliott on its side, though, Peabody hopes that it can get things turned around. At least for today, investors share the coal company's optimism.