Please ensure Javascript is enabled for purposes of website accessibility
Log In Help Join The Motley Fool
Free Article Join Over 1 Million Premium Members And Get More In-Depth Stock Guidance and Research
By Anders Bylund – Feb 6, 2020 at 8:47AM

The networking equipment specialist beat analyst expectations in the fourth quarter but set the bar low for the next report. Opportunistic investors may want to buy this high-quality stock on the cheap right now.

Netgear's fourth-quarter results by the numbers

Netgear nearly broke even on the unadjusted bottom line, compared to a $19.5 million deficit in the year-ago period. The company recorded a $27 million loss from discontinued operations in the fourth quarter of 2018, related to the spinoff of its home automation division into what's now known as Arlo Technologies (ARLO -1.64%). That expense wasn't there to weigh on Netgear's net profits in 2019. For the record, Arlo's market cap has plunged more than 80% lower since the IPO in August 2018.

Tariffs that took effect last September added to Netgear's manufacturing costs and made it difficult to find buyers in the Chinese market. Sales fell in the greater China region while all other geographic markets posted seasonal increases in end-user demand. Management expects the tariff effects to fade out in the first half of 2020, but the trade wars made their presence felt in Netgear's fourth-quarter results.

Netgear's management expects first-quarter sales to come in at roughly $213 million, a 14% year-over-year slowdown. Your average analyst had been hoping for something more like a 6% decrease to $234 million.

The company is preparing to launch a heavy marketing push for its Wi-Fi 6 products in 2020 but the end-market demand isn't quite there yet. In particular, many North American internet service providers are preparing to launch broadband services based on 5G wireless networking.

When these 5G-based service offerings start to launch, Netgear should benefit from a groundswell of equipment orders combining local networking of the Wi-Fi 6 flavor with 5G modems to replace the current generation of cable modems and routers. The 5G rollouts should boost Netgear's Wi-Fi 6 sales in a symbiotic type of relationship.

The first quarter will be challenging, but the year as a whole should present plenty of room for financial growth. In Netgear's fourth-quarter earnings call, CEO Patrick Lo said: 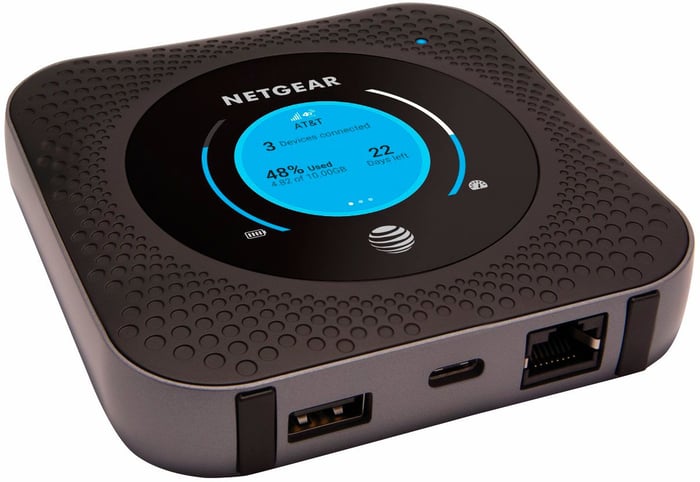 Many of Netgear's 5G and LTE routers will feature Wifi 6 hotspots in 2020. Image source: Netgear.

Netgear is a buy for risk-tolerant investors right now

Netgear's stock crashed hard in 2019 and continues to struggle today, showing a 20% negative return over the last six months and trading at just 12 times forward earnings. If the big Wi-Fi 6 and service provider-grade 5G router plans work out as expected, Netgear's financial pain could be short-lived and followed by a strong bounce.

It's not always easy to drum up enthusiasm over a stock that's trading near multi-year lows, but that's actually the best time to buy -- as long as you have confidence that the company will be fine. In this particular case, I do believe that the negative market reaction around Netgear's near-term market challenges is shortsighted and overdone.