The regulatory first could pave the way for a wide range of robotic delivery services.

The Department of Transportation (DoT) has given the all-clear for self-driving car company Nuro to begin using its driverless local delivery truck. The approval marks the first time that the regulatory agency has given the go-ahead for self-driving cars without steering wheels, pedals, and other typical vehicle features to operate on public roads.

Nuro's R2 model trucks were unveiled in conjunction with news of the DoT approval. Restaurants, grocery stores, and other businesses will be able to use the company's driverless trucks to deliver goods locally, and Nuro's regulatory win looks like a meaningful step forward in the autonomous vehicle space and signals near-term opportunity for a wide range of robotic delivery applications. 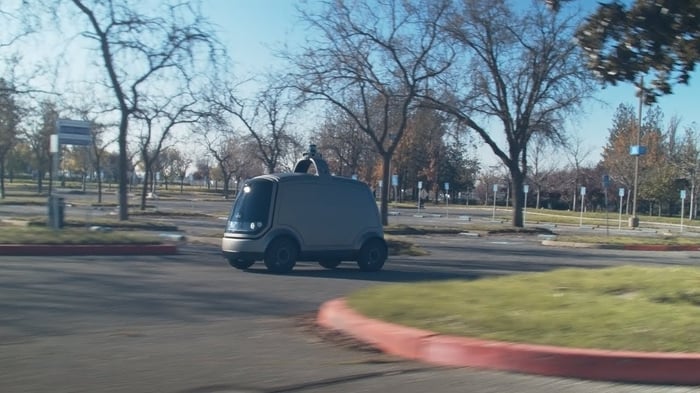 What's next for Nuro and driver-less vehicles?

Nuro's R2 delivery trucks have no space for human drivers or passengers and depend entirely on sensors and autonomous-driving software to chart their navigation. The trucks will travel at low speeds and have been exempted from the DoT from usual requirements for vehicles to have side and rearview mirrors and windshields.

Nuro partnered with Kroger in 2018 to test a driverless grocery delivery program in Arizona and then moved the test run for the service to Houston, Texas in 2019. The DoT's move to authorize Nuro's new R2 autonomous trucks for operation on a much wider scale suggests that the driverless-technology specialist's delivery business could ramp sooner rather than later. With the company's R2 trucks cleared for operation, approval for other companies and vehicles in the category could also be on the near horizon.