Please ensure Javascript is enabled for purposes of website accessibility
Log In Help Join The Motley Fool
Free Article Join Over 1 Million Premium Members And Get More In-Depth Stock Guidance and Research
By John Ballard - Feb 29, 2020 at 8:02AM

Looking for a good stock idea? Check out what these gurus are buying.

The best hedge fund managers oversee hundreds of millions, if not billions, worth of assets. These investors often have years of experience and a certain knack for picking winners, so it can pay off to check out what they are buying. 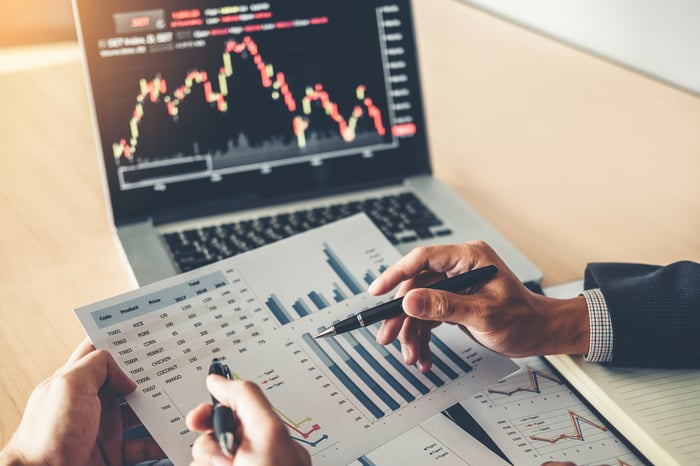 Shares of the grocery store chain appeared as a new holding for Warren Buffett's Berkshire Hathaway (BRK.A 0.20%) (BRK.B 0.15%) last quarter. It's a relatively small position by Berkshire's standards. The 13-F filing with the Securities Exchange Commission shows that Berkshire held a stake worth $549 million at the end of December.

However, it likely wasn't Buffett who bought the shares, but one of the two investment managers who manage a portion of Berkshire's money. Buffett's hired hands -- Todd Combs and Ted Weschler -- are very talented investors who follow a similar value investing approach as Buffett. So, why Kroger?

The stock trades at a modest valuation and has been consistently profitable over the last decade. It's also seeing gains with its delivery business, where digital sales climbed 21% in the third quarter.

Kroger could withstand the grocery competition from Amazon.com and Walmart and continue to grow. It has nearly 2,800 stores in 35 states that generate $121 billion in revenue. That's a lot of customers who are choosing to shop at their neighborhood Kroger store, and with Kroger offering its own digital delivery and loyalty program, those customers will likely continue shopping at the store they know best.

Those are likely the qualities Berkshire's investing gurus saw in the company and decided to invest at what looks like a good price.

It's easy to understand why investors like Alibaba. Despite the coronavirus outbreak, the company is carving out a massive share of the e-commerce pie. While online retail sales are growing about 20% per year in China, Alibaba is growing nearly twice as fast, driven by the popularity of Tmall and Taobao. It already has more than a 50% share of China's online retail sales.

Alibaba is also seeing growth in other businesses, such as cloud, marketing, entertainment and media, and digital payments. Across these segments, Alibaba is gathering data to help businesses market brands and products to consumers, which is ultimately the source of Alibaba's competitive advantage.

Alibaba trades at a forward price-to-earnings ratio of 28.6, which looks like a good deal relative to Amazon's 69 forward earnings multiple.

Roku: Ready for growth in streaming

Roku closed the books on a big year in 2019. One guru is high on the stock. Pat Dorsey of Dorsey Asset Management acquired a stake worth about $48 million in the fourth quarter, making Roku a core holding for his firm.

Dorsey likes to make big bets on a select number of stocks that he believes have "sustainable competitive advantages." As Dorsey Asset Management explains on its website, the firm looks to buy these stocks at prices that represent "reasonable discounts to a rational assessment of intrinsic value," so what's Roku's advantage?

Roku has built a powerful operating system for smart TVs that is able to gather data about consumers' viewing interests and leverage that data to sell to advertisers to make money. This data helps serve not only advertisers, but also content publishers, TV manufacturers, and service operators.

Last year, Roku's revenue rose 52% to reach $1.1 billion, and management believes they are just getting started. While Netflix brought streaming to the mainstream, there are still a lot of people who haven't made the switch to digital. Roku believes the next decade will see more people around the world choose streaming as the primary way to watch TV.

A telling sign that Roku will be successful is the high engagement on the platform. In the fourth quarter, active accounts grew 36% year over year, and the number of streamed hours increased by 60% to 11.7 billion. Roku believes its technology, which helps viewers discover new content, is the source of its competitive advantage.

The stock more than quadrupled last year, and its $13.6 billion market cap looks steep for a company that is not profitable. Investors are putting in a lot of faith that Roku can eventually scale the business to a point where it can spread more revenue across less costs to show a profit.

One metric that shows Roku making progress on its path to profitability is average revenue per user, which grew 29% last year. If that trend continues, the stock could be a rewarding investment from these levels.