Please ensure Javascript is enabled for purposes of website accessibility
Log In Help Join The Motley Fool
Free Article Join Over 1 Million Premium Members And Get More In-Depth Stock Guidance and Research
By Jason Hall - Feb 8, 2020 at 6:30AM

Starbucks, like many other retailers operating in China, will feel a temporary sting as people avoid going out in public. But its financial strength, brand power, and strong operations should continue delivering durable results for many years to come.

Like every other company that touts China as a big part of its plans, Starbucks (SBUX 0.96%) has seen its stock price take a bit of a tumble in recent weeks. Since mid-January, shares are down almost 6% as of this writing; at one point they had lost more than 9% of their value on fears of the novel coronavirus that's ravaging parts of China and rapidly spreading around the world.

And while shares have started to recover, they're still almost 11% below the all-time high reached late last summer. That's despite the global coffee giant having returned to solid growth in recent quarters that looks remarkably sustainable for a company of Starbucks' size, and facing stiff competition around the world, particularly in China from upstarts like Luckin Coffee (LKNC.Y -1.86%), which are looking to take a share of the massive opportunity that China represents. Yet even with the risks that coronavirus could pose, increased competition, and Starbucks' already-massive scale, there's a lot to like about the company, which continues to leverage its powerful brand and world-class operations to deliver huge profits. Keep reading to see three key metrics that demonstrate the power of Starbucks' business and brand.

The most important part of the comps number

Starbucks' same-store-sales -- also called comps -- is a valuable metric. Starbucks comps, very specifically, measure sales in company-owned stores that have been open at least 13 months. This gives us a way to measure the company's ability to attract, retain, and grow sales, which is very important for any business.

The good news for Starbucks is, in recent quarters, comps have been great. In its fiscal first quarter of 2020, comps increased 5%, the same as it reported in Q4 of fiscal 2019.

Put it together and Starbucks is showing two things. First, it's finally turned the corner back to traffic growth in the U.S., and even with increased competition in China, there's still a clear path to growth for the company there.

Sure, it may not be delivering the same neckbreaking pace of growth that Luckin is seeing in China, but so far, it's the one that is growing there profitably. Let's talk more about that.

Starbucks isn't just selling more coffee -- along with other caffeinated beverages and food -- to more people these days. It's doing it more profitably. To describe it another way, Starbucks is generating steadily more and more operating leverage, which we saw clearly last quarter in its operating margins.

Here's the company's operating margins across its three segments last quarter, as compared to the year-before period:

In summary, Starbucks is one of the best businesses out there at taking a modest amount of revenue growth and turning it into a nice, fat result on the bottom line. For a little bit more context, the company has generated more than $4.5 billion in operating cash flow over the past four quarters, and could very well surpass $5 billion in operating cash in fiscal 2020.

A balance sheet that's built for the future

In addition to the durable popularity of its brand and the strength of its operations, Starbucks is also incredibly well-built for the long term. The company does carry $11.7 billion in long-term debt, but that debt is long term and low-interest that's well within the company's ability to service.

Moreover, it's been able to use that low-cost capital to leverage its growth, with incredible capital return rates that are the envy of its peers: 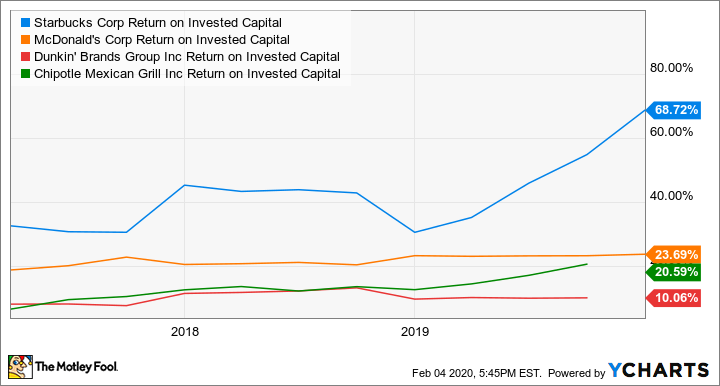 Not only has it done incredibly well with the debt it has used, but its use of leverage is relatively low, at 1.69 times debt to EBITDA, almost half that of McDonald's and about one-fourth that of Dunkin' Brands.

Back to the balance sheet. Starbucks also carries a sizable $3.1 billion in cash and short-term investments on the books, a number that has rarely fallen below $2 billion in the past five years.

This does two things for the company:

The risk of such a big cash position is counting on management to not spend it just because it's there. So far, that hasn't been a problem under a disciplined management team that's focused more on finding ways to generate more cash and reduce expenses than look for ways to spend all that cash.

An excellent durable business that will keep winning

I'm not going to deny that Starbucks is an expensive stock -- at recent prices, it trades for almost 30 times trailing earnings. But here's the rub: Starbucks is almost always an "expensive" stock. Five years ago, it traded for a price-to-earnings (P/E) ratio that was a whopping 8% lower than today's, but the stock price has doubled since then, and the dividend is up 29%, too.

Also, the competition bogeyman will always rear its head. Remember when Dunkin' Brands was going to eat Starbucks' lunch? McDonald's? And what's old is new again: It's the small, local cafes Starbucks has to worry about, along with Luckin in China. Over the past two decades, a litany of "competition" has been called the next Starbucks killer, and it's never materialized.

Yes, the company has faced serious competition, but you know what's happened? Coffee sales have just grown for everyone. Competition and innovation have led to more choices for consumers. And we've seen multiple businesses "win" the coffee wars as the market itself has grown. The global middle class and upper class are expanding, and urban populations are skyrocketing.

Yes, that's going to lead to more competition, but that's the sign of a healthy, profitable market. Starbucks has the brand, the operations, and the balance sheet to remain relevant, competitive, and even dominant for many years to come.